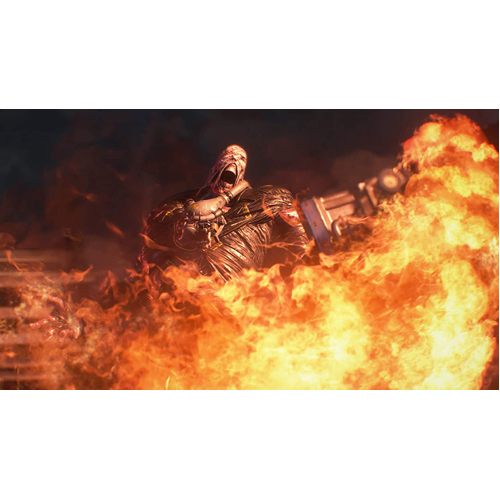 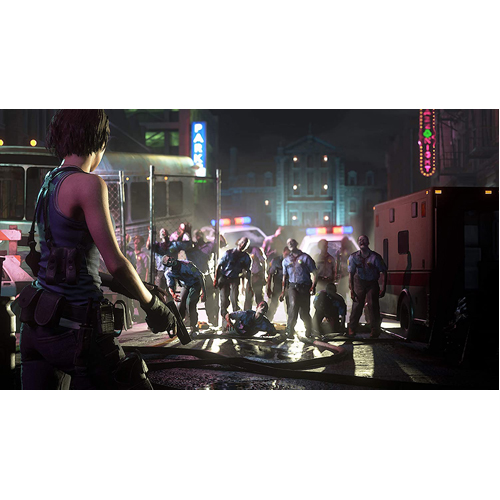 Pay in 3 interest-free payments on eligible purchases. Learn more
Success! We will let you know when this product is available again.
Your email address has been unsubscribed!
Your email address has been unsubscribed!
Notify me when this product is available to purchase!
This email address is already subscribed to this product!
This is a full remake and reimagining of Capcom’s Resident Evil 3: Nemesis, which released back in 1999. This game follows Jill Valentine, one of the protagonists of the original Resident Evil, as she attempts to escape Raccoon City, which is completely overrun with zombies. Along the way, an advanced creature known as the Nemesis begins stalking her throughout the city.
Read More
Category Video Games Tags Capcom, Resident Evil Video Games, Software, Survival Horror Video Games, Xbox One SKU VCE-20396 Availability Out of stock
Share
Share this
87%

This is a full remake and reimagining of Capcom's Resident Evil 3: Nemesis, which released back in 1999. This game follows Jill Valentine, one of the protagonists of the original Resident Evil, as she attempts to escape Raccoon City, which is completely overrun with zombies. Along the way, an advanced creature known as the Nemesis begins stalking her throughout the city.

The Resident Evil 3 remake comes out just over a year after the Resident Evil 2 remake, which satisfyingly mirrors the release windows of their predecessors. Unfortunately this remake, much like the original source material, is inferior to its predecessor.

That’s not to say that Resident Evil 3 remake isn’t good, it’s a great game, but it simply doesn’t reach the lofty heights set by the iconic Resident Evil 2 remake. The remodelled Jill Valentine is beautifully realised and much more appropriately dressed to take on the undead. She’s likeable, determined and exudes an unbreakable will.

Along for the ride is Carlos Oliveira, an Umbrella mercenary with his inexplicable hair sent out onto the zombie-infested streets of Raccoon City to begin a rather late evacuation. Capcom has placed a greater emphasis on Carlos and sees you playing him in two extended sections, which are more than just filler.

Much like the Resident Evil 2 remake, there is an incredible level of detail throughout the game, which was built on the same RE Engine. Lighting effects have been pushed to new heights; every inch of Raccoon City is a wonder to behold. Sound design is also fantastic, with ambient noise playing a much stronger role. It was the silence in Resident Evil 2 that kept you on the edge of your seat, but Resident Evil 3’s clever use of rustling newspapers or creaking gates keep your heart pounding.

Resident Evil 3 remake is an exhilarating thrill ride from start to finish, sadly it’s a rather short one. I finished my first playthrough in an afternoon, just under the five hour mark, much to the dismay of my girlfriend who had hoped it would keep me entertained for a few days. But as a fan of the original I knew I was in for a shorter, much more action-orientated run. For starters there are several explosive set pieces, much more than Resident Evil 2. It does contain a few of the staple horror moments, such as blood-soaked corridors, but you’ll spend less time sneaking and more time shooting everything in the face. Enemies are also less of a threat this time around thanks, in no small part, to the dodge ability which, when used at the correct moment, will allow Jill or Carlos to counter-attack.

Jill starts with an assault rifle on lower difficulty settings. Starting on ‘Normal’ difficulty you’ll find the shotgun early on and it’s not long until you find the assault rifle anyway. And it’s only a few short sections before a grenade launcher becomes available. In Resident Evil 2 you constantly had to find space for key items, in Resident Evil 3 it’s more a case of finding room for all of your firepower.

Capcom has been merciless with which sections it decided to cut from this remake to keep the plot moving forward at full steam. You start in Jill’s tiny but detailed apartment before Nemesis starts his assault forcing you to run. You’ll spend the first hour or two in Raccoon City, unlocking doors, finding maps and getting power restored to a train station and your escape. Raccoon City is more open than the claustrophobic police station of Resident Evil 2, with several shops and building  for you explore. And there are large groups of zombies roaming the streets that replace solitary enemies hiding around corners. Ultimately though, it’s not long before Jill and Carlos are on the train and, as you’d expect, it doesn’t go well.

Returning to the RPD with Carlos will raise a smile for fans of Resident Evil 3’s predecessor, although this time around you’re armed with an assault rifle, which certainly removes any fear. In the Resident Evil timeline you arrive before Leon or Claire so Capcom have incorporate clever nods to Resident Evil 2. There are explanations of some damage within the RPD as well as how some characters ended up their current situation.

The original Resident Evil 3 featured a clocktower section, in the remake it’s no more than a boss fight arena and Raccoon Park with it’s Grave Digger boss have been removed entirely, which causes the game to hurtle to it’s final sections.

Another factor that makes Resident Evil 3 a much shorter game is the lack of puzzles. There are only a handful to solve, none involve much work and are mostly self-contained, so there’s no need to backtrack for items. Puzzle-solving are a staple in the original Resident Evil games, the Resident Evil 2 remake had plenty of that too. The absence of them creates a much more linear experience, you can spend time backtracking to find weapon attachments and extra resources, but it’s not necessary to make it to the endgame.

Which brings me onto the titular Nemesis - Resident Evil 3’s big bad. Unlike Mr X from Resident Evil 2 who was a slow, unrelenting force that struck fear in your heart, Nemesis is a roundhouse kick to the face. From the very beginning he will grab and throw you, smash through walls, run after you at breakneck speed and, when you get past him and sprint and make your escape, will jump in front of you to continue the fight. Sadly this panic-inducing pace shifts down a gear once you hop on the working train as the Nemesis encounters become entirely scripted set pieces.

That’s not to say there is nothing to do once you complete the game, there are harder difficulty settings including the unforgiving “Inferno” setting. When you finish the game you also unlock the shop, which lets you buy, among other things, benefits to make another playthrough much easier. The shop requires virtual currency obtained by completing challenges within the campaign. Happily, unlike the Resident Evil 2 remake, using these purchased items doesn’t affect the rating you’re given once you complete the game, this makes obtaining an ‘S’ rank so much easier. And there’s always multiplayer to try.

Multiplayer comes as a separate mode called ‘REsistance’ and sees you working with three other players to escape the clutches of a fifth player. Those familiar with Dead by Daylight or Friday the 13th will be right at home with the 1vs4 asymmetric dynamic. Unfortunately, whereas Dead by Daylight and Friday the 13th encourage you to work together it’s still entirely possible to complete a match alone, in REsistance teamwork is essential. You need to communicate and work together at clearing rooms, using items and knowing the perks of the character builds your team is using and how best to utilise them. Playing with random people is rather difficult as not everyone wants to use a mic or has one. If you choose to be the evil player trying to trap everyone - known as a Mastermind - be ready for long wait queues and expect people to ‘rage quit’ when you find a match as, at the time of writing, Masterminds are rather overpowered. Luckily there are no trophies/achievements linked to multiplayer, speaking of which...

After my first playthough I came away with 31% of the trophies/achievements. It would’ve been higher but I missed one lockbox thanks to the Nemesis chasing me with a rocket launcher. I also ran straight past an optional puzzle despite having all the items for it. The trophy/achievement list isn’t as difficult as it’s predecessor but it’s certainly more time-consuming, especially if you replay the campaign and complete challenges to afford the most useful shop benefits. As it currently stands 3.2% of players have the platinum trophy for Resident Evil 2 on Playstation4 and 10.2% have it for Resident Evil 3.

It may sound like I’m not a fan of the Resident Evil 3 remake, don’t get me wrong, I thoroughly enjoyed my time with the game and instantly jumped back in for more. Jill is a fantastic character as is Nemesis, and each of their adrenaline-fuelled fights are memorable. The first half of the hospital level with Carlos is wonderfully unsettling and brought back memories of Resident Evil 2’s police department, oddly more so than when visiting the actual RPD. The reduction of the clocktower and the cutting of Raccoon Park make an already short game shorter. Ultimately the source material is simply not as good as the original Resident Evil 2, but if you prefer your survival horror to be more action-packed you may disagree.