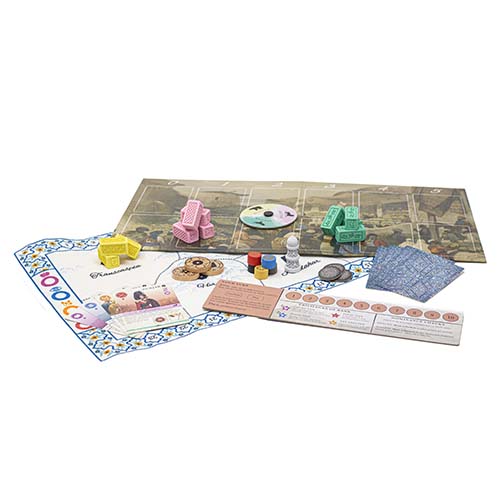 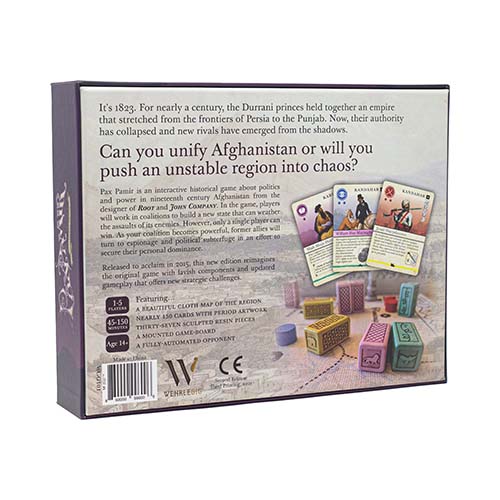 Pay in 3 interest-free payments on eligible purchases. Learn more
Success! We will let you know when this product is available again.
Your email address has been unsubscribed!
Your email address has been unsubscribed!
Notify me when this product is available to purchase!
This email address is already subscribed to this product!
In Pax Pamir, players assume the role of nineteenth century Afghan leaders attempting to forge a new state after the collapse of the Durrani Empire. Western histories often call this period “The Great Game” because of the role played by the Europeans who attempted to use central Asia as a theater for their own rivalries. In this game, those empires are viewed strictly fr…
Read More
Category Board Games Tag Podcast Approved SKU ZBG-SMG35 Availability Out of stock
Share
Share this
94%

In Pax Pamir, players assume the role of nineteenth century Afghan leaders attempting to forge a new state after the collapse of the Durrani Empire. Western histories often call this period "The Great Game" because of the role played by the Europeans who attempted to use central Asia as a theater for their own rivalries. In this game, those empires are viewed strictly from the perspective of the Afghans who sought to manipulate the interloping ferengi (foreigners) for their own purposes.

In terms of game play, Pax Pamir is a pretty straightforward tableau builder. Players spend most of their turns purchasing cards from a central market, then playing those cards in front of them in a single row called a court. Playing cards adds units to the game's map and grants access to additional actions that can be taken to disrupt other players and influence the course of the game. That last point is worth emphasizing. Though everyone is building their own row of cards, the game offers many ways for players to interfere with each other directly and indirectly.

To survive, players will organize into coalitions. Throughout the game, the dominance of the different coalitions will be evaluated by the players when a special card, called a "Dominance Check", is resolved. If a single coalition has a commanding lead during one of these checks, those players loyal to that coalition will receive victory points based on their influence in their coalition. However, if Afghanistan remains fragmented during one of these checks, players instead will receive victory points based on their personal power base.

After each Dominance Check, victory is checked and the game will be partially reset, offering players a fresh attempt to realize their ambitions. The game ends when a single player is able to achieve a lead of four or more victory points or after the fourth and final Dominance Check is resolved.

Pax Pamir (2nd Ed) - henceforth Pax - is quite simply my favourite board game. It is an absolutely sublime piece of design by Cole Wehrle, building on his collaboration with Phil Eklund from the first edition. He has produced a game that combines area control, tableau building and player politicking in a rich, evocative historical setting.

It is superficially simple - small hand, a small number of actions and yet highly complex, as the gorgeously illustrated cards provide a wide range of choices and combinations which make for a rich and satisfying gameplay experience. I cannot think of a game that I would rather spend an hour or two playing with board gaming friends.

The game is set in early nineteenth century Afghanistan, at a time when the Durani Empire had collapsed, and Britain and Russia vied to extend their power into the region at the cost of the indigenous Afghani tribal leaders.

The game casts the players as Afghan 'fixers' manipulating the three competing factions: choosing a side, ensuring their dominance, and securing preeminent influence with the victors.

Players will buy cards from the market and play them into their own tableau, which forms their court. The cards often have an instant effect, which might include placing factional pieces onto one of the six regions on the map, either as armies or roads. Or it might involve placing the player's own wooden cylinder pieces as tribal leaders on the map or as spies on their own or rivals' cards.

Cards also typically have a special power, which can be activated separately to provide other effects, such as battle, move, build or tax. The cards are unique, depicting a variety of individuals, places, institutions or groups; but they are also categorised into one of four suits: political, military , economic or intelligence.

And they may have alignment with one of the three factions or be neutral. Activating a card's power costs one of your two precious actions unless it is in the active suit in which case actions on any of these cards in your tableau are free.

So that's what you are doing, but how and why? When the game starts you choose a faction to back: Russian, British or Afghani. Then there are two inter-related activities which you need to attend. First, you need to ensure that faction's dominance on the map.

This is done by placing pieces on the board either as armies or roads, and then moving them and battling other factions. You are aiming to have four more pieces than either of the other two rivals. Then you need to maintain that majority until a dominance check card appears in the market and you (or a rival) buy it and trigger scoring.

But it is entirely possible more than one of you is backing the same faction - so you also need to ensure you have the greatest influence with that dominant faction. That is achieved by having faction-aligned cards in your tableau, purchasing gifts, and betraying (assassinating) other cards in rivals' tableau aligned to other factions.

And at any time, you can pivot - changing factional loyalty by playing a differently aligned card. It has consequences - all of the investment into these three areas as lost: previously aligned cards, gifts and victims are discarded. But then sometimes you have to bend with the prevailing wind.

But what if no faction is achieving dominance… what then? Well, you can trigger scoring using a dominance check card in the market at any time. In this instance it's about who has the most wooden cylinders off their player board - either played as regional tribal leaders on the map, spies in your and rival courts or markers to the number of gifts bought.

These two different dominance check outcomes: 'successful' and 'unsuccessful' have different effects. Successful grant 5/3/1 VP for first to third place in influence with the successful faction AND all factional units on board are cleared. By contrast, unsuccessful grants 3/1 VP based on most/second most wooden cylinders off your player board AND the faction units stay on the board.

Victory comes to the player with the most VP once the fourth and last Dominance check card is bought… unless a player gains a 4 VP lead in which case the game ends with their early victory.

The Game's The Thing…

So why is it my favourite game? Well, the setting helps, I am a history teacher and it is great to see such a fascinating piece of history depicted through a post-colonial lens. Though to be honest you need to know none of the backgrounds to enjoy the political dynamic of the game, and if you want to know more as you play the illustrations and historical flavour text on the cards are largely accurate (except for where Wehrle has chosen to add occasional fictional flavour - notably Harry Flashman).

But it's the gameplay that is king. I love the fact that there are two games going on - one for factional dominance and another for influence. Or is it three games, as you also have an eye to who has the most cylinders down in case an opportunity for a quick 'unsuccessful' dominance check can net you some points?

I also love the fact that, in effect, there are two boards: the central map is one, but the other is formed by the players' tableaux, which form a continuous track around the map. Along with this spies move, poised to blackmail rivals and betray (assassinate) their cards, or to protect your own court from similar skullduggery.

There's some great interplay between the map, your cylinders, and the cards in your court. If you play cylinders to the map as tribal leaders and the last of these in a region is eliminated by a factional battle, all political cards in your tableau associated with that region are discarded. And vice versa if the last political card of a region in your tableau is betrayed, your cylinders in that region are removed.

And I haven't even mentioned money and the economic aspect. Money is tight and the economy is relatively closed. Payments for building or gifts are placed on market cards to be hoovered up by players taking cards as subsequent actions. The tax action can always target the market, but if you have a tribal leader down, then you can tax any rival player who has a card in their court associated with that region.

Battles are simple but brutal. Armies can destroy other armies, roads or tribal leaders on the map (unless that leader's player is following the same faction as you). Spies can also fight each other if they are on the same card. And you can eliminate as many opposing pieces as your control in that location - the aggressor takes no casualties.

The interaction of all these mechanisms makes for delicious crunchy decision making. There is constant, palpable tension. Alliances between players shift as factional alliances change. Sure, there is some swing and some king-making, but you can bounce back from the lows with a bit of luck in the market and some smart decision making.

And all of this is wrapped up in beautiful design and superb production values - did I mention the cloth board and the resin lozenges that are the factional pieces. It's not a game without flaws - it's best (though not always 'fairest') with four.

There is an automaton, which enables solo play or can work alongside a small player count as a boost - it's well designed and tough but not really a substitute for a live player. There is more luck than one might imagine in Pax, in the form of the draw into the dual tracked market - and the volatility of the market with the optimal player count means you can end up needing to be more tactical than strategic.

And it's hard - this is not a game for casual board gamers. But get four players who like heavier games around a table and I challenge you to find a richer, more evocative competitive experience. Pax Pamir is both a historical epic and a modern classic.