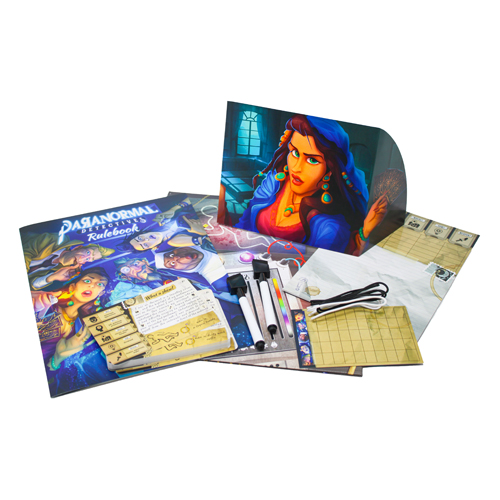 you could earn 2529 victory points

you could earn 2529 victory points

You open your eyes to discover the most horrible truth of a lifetime… It has just come to an end and you are a ghost, floating in the air! Terrified, you look at your own body. A group of strange individuals have gathered around your mortal remains, watching it closely with sparks of fascination in their eyes. They want to communicate with you to discover how your life ended. …
Read More
Category Board Games Tags Fun For All the Family, Lookout Games, Podcast Approved SKU ZBG-LKYPARR01EN Availability Restock Expected
Share
Share this
75%

You open your eyes to discover the most horrible truth of a lifetime... It has just come to an end and you are a ghost, floating in the air! Terrified, you look at your own body. A group of strange individuals have gathered around your mortal remains, watching it closely with sparks of fascination in their eyes. They want to communicate with you to discover how your life ended. You need to talk to them and reveal the truth so the culprit can be judged!

Paranormal Detectives is a deduction party game. One player takes the role of a Ghost. All other players work as Paranormal Detectives and need to discover how the victim died. Using paranormal abilities they will communicate with the Ghost, asking open questions about the details of the crime. The Ghost answers in a variety of ghostly ways - by arranging a hangmans knot, playing chosen tarot cards, creating a word puzzle on a talking board, drawing by holding the hand of a detective and many more!

At the beginning of the game, the Ghost player receives a story card with a full description of the murder. Each card depicts all the details of the case. Each Detective receives asymmetrical, pre-constructed set of interaction cards, player investigation sheet, and a player screen.

Detectives may try, twice during the game, to guess what has actually happened to the victim stating who was the killer, where did it happen, what was the motive, how was it done and what was the murder weapon. Then the Ghost writes down secretly on this Detectives investigation sheet how many of their answers are correct.

The game can end in two ways:
If a Detective gives all correct answers. In this case, they win, together with the Ghost player.
If all Detectives run out of interaction cards. In this case, if no one has guessed everything correctly then, whoever guessed correctly the most information is the sole winner of the game!

Hyped up as one of the big launches from Essen Spiel 2019, Paranormal Detectives certainly lived up to the excitement for me. It is one of the best party games I’ve ever played, and I’ve certainly enjoyed a lot of them!

The game is simple. You are dead. Ok, that’s a bad start. But fear not! There is a group of determined detectives here to avenge your murder. Oh, and handily, they have paranormal abilities.

If you are looking for a party game with a familiar feel, that is simple to learn and teach but crazy fun to play, all with a lot of laughs along the way, then look no further.

I’ve hungered for your touch.

In the box is a selection of hilarious tools used to communicate with the detectives to offer clues. They are looking to find out the five key elements of the story, who, how, where, why and with what was the ghost killed. Each scenario has a hilarious back story for the ghost to base their answers on.

The Detective who guesses all five keys right first wins with the ghost. If no one gets all five, then whoever got the most first with their previous guesses is the winner but the ghost loses. They do put a limit on the amount of guess you can make as the detective. However, we removed that rule as a house variant. It’s a bit like Just One. You don’t want to discourage the detectives from having a guess at the five keys from fear of getting it wrong.

As the ghost you have nine ways to communicate ranging from using Tarot cards and a Ouija board, to drawing shapes on the detective’s backs. (If both players are ok with a bit of touching) You can also rearranging two bits of cord into shapes to offer a hint to help solve the case. There is even an opportunity to silently mouth one word, a three second mime or a make single sound as a clue. The single sound cannot be a word, and often ends as a confusing but very comical scream that has all players in fits of laughter. Left more confused than before, Detectives often ask “can I hear that again please?!”

There are 28 cases in the box with more on a free app. We have also played by just making our own story up, which is equally fun. The game is not limited like others in the deduction range. You cannot really pay the same case again with the same group, but you certainly can if you are the ghost playing with a new recruitment of detectives. It’s fun to see how different friends work towards each case. And then of course judging them against your previous friends’ performances!

Time goes by so slowly

It does start a little slow, but very quickly picks up to a frantic race to guess all five keys right first. Especially if you have lifted the restriction on how many guess each player can have.

You can either play competitively or cooperatively. This determines your question and perhaps how the ghost answers as all players can watch and listen to most clues. For us, we found cooperatively is far more entertaining as the detectives can then debate and speculate the meaning and interpretation of the ghost clues. Otherwise, it gets a little silent, which for a party game, doesn’t work for me. Whereas in coop, listening to a detective suggest what they just saw was one thing, when the ghost knows it was in fact something entirely different, is nothing short of hilarious!

Yes, this merriment can lead to more clues for the detective, as they realise from the ghosts cruel and mocking laughter that they may be a little wide of the mark! But in the 15 odd games we have played, we have only ever had all five keys guessed correctly once, so I wouldn’t worry about that. And in coop, you all want to get all five keys right, so why not make it that little bit easier.

Out of the methods of interaction, the quill pen is my stand out. The detective holds the pen, the ghost holds the detective’s hand, and then tries to draw a clue in one continuous line. To draw a clue to detail why you were killed, when the answer is inattention…! Try not to laugh as the detectives try to interpret whatever it is you decide to draw for that!!

Time can do so much

In every game I have played, the detectives always feel lost in the first half of the game. You have five keys to solve and you won’t get them from the first clue. The detectives probably won’t have any idea what the first few clues mean. This can be disheartening if you don’t explain this to new players. But trust me, it will click. Add the clues together, learn from each other’s answers from the ghost when possible, and try to find the consistencies. Maybe that pizza the ghost drew on your back has something to do with the shield on the tarot cards. Oh no, hang on! It was a dinner plate! You were killed by a dinner plate? Wait, what?

Take notes, don’t worry about solving the five keys too soon, this is not a one turn game. It takes 45 minutes to play and you should not expect to beat the system sooner. You cannot just take a punt like in Cluedo, you need to do some detective work here. And the fun comes from that. Enjoy the process and the laughter that comes from misinterpreted clues. And ultimately, the satisfaction from figuring out it wasn’t a dinner plate after all, it was a stone!

Are you Still Mine?

This game won’t be for everyone, but if you like party games, then you will enjoy it a lot. If you want to be the centre of attention, loud and crazy, be the ghost. If you want to watch someone else do that and test out your deduction skills, be the detective. It works for most player types this way, and I have found it as much fun to watch as it is to play.

For the price, there is a lot of game here, and although it employs some previously seen methods such as a bit of charades and pictionary, it’s all with a little twist and within a deeply engrossing theme that makes this experience feel unique to most casual gamers and fun for more experienced players looking for a lighter game.

If you like a riddle, or murder mystery, or just laughing at your family and friends doing silly things, this game has a lot of happiness in the box. It is family friendly too, they have cards specific for younger audiences, or as an adult, be the ghost and edit as you see accordingly. As such I would highly recommend this as a perfect filler or party game suitable for most gaming groups who don’t mind a bit of movement and light-hearted interaction! And if anyone gets the weapon right in case 27, you have my life long respect!