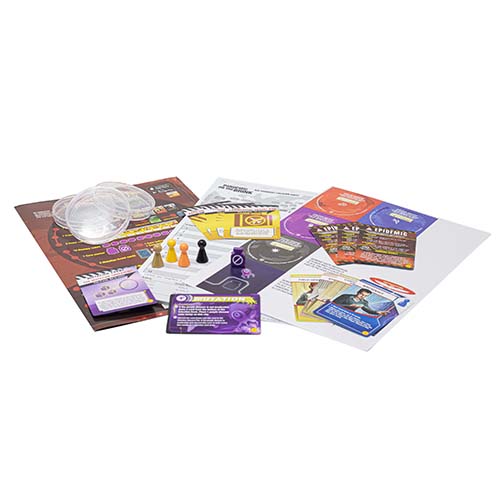 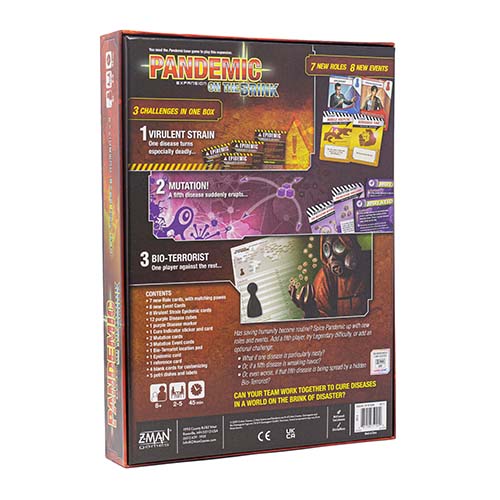 you could earn 2289 victory points

you could earn 2289 victory points

Pandemic: On The Brink, from Z-Man Games, adds three expansion modules for Pandemic that are guaranteed to spice things up! It also includes a number of welcome additions including more roles and events. In the Virulent Strain Challenge module, one of the four diseases will go out of control in horrible and unexpected ways. In this module you will ditch the normal Epidemic cards and…
Read More
Category Board Games Tags 9+, Best Sellers, BGG Golden Geek, Exceptional Components, Pandemic, Z-Man Games, Zatu Platinum Award SKU ZBG-ZMG71101 Availability 3+ in stock
Share
Share this
93%

Pandemic on the Brink expansion by Z Man game provides additional content for the Pandemic base game. The expansion includes: option to increase player count to 5, 7 new role cards, each with their own special abilities, the option to add a fifth player, 8 new events, 5 petri dishes to hold the viruses and three completely new modules that increase the difficulty and replayability for those that already own Pandemic.

The three new modules include:

The virulent strain challenge:
Base game epidemic cards are replaced with expansion cards. These add an additional effect to the most prevalent virus, on the board when the first epidemic is drawn, making it more difficult to cure. The effects are cumulative and with 8 cards to choose from, each game is different.

The Bio-terrorist challenge:
Saboteur player is added, utilising hidden movement on their own paper, pandemic map. The Bioterrorist takes a turn after each player and can infect cities, with the mutated virus, sabotage research bases and move. However, when the Bioterrorist occupies a hero’s space they are spotted, place their pawn on the board and can be arrested by the other player. This module cannot be played with the mutation challenge.

The Bio-terrorist wins if heroes lose the game. So now, it is not just the game, but a player who the heroes must defeat.

The Expansion adds so much to the game: more decisions, greater depth and increased replayability.

I still remember the moment in my first game of Pandemic when we drew an Epidemic card and after infecting a city drawn from the bottom of the infection deck I experienced a moment of realisation when we had to shuffle the discard pile then put it back onto the top of the deck – “Hang on, that means that all the cities previously infected could get worse or even outbreak!... Ohhh…” Pandemic’s global success was not a right-place right-time thing – it was the dawn of world-class co-operative gaming, setting the standard for tense, cinematic board gaming.

A year later, designers Matt Leacock and Tom Lehmann looked to build upon the game with a modular expansion, aptly titled On The Brink. The expansion includes three new modules that change an element of the game. It also includes more roles, events, an increased base game difficulty level and five petri dishes to store each disease in!

The three main modules of this expansion pit you against the Virulent Strain challenge, a Mutated purple disease and the dreaded Bio-Terrorist! Before looking at each of the modules I’d like to quickly look at the added extras.

On the Brink adds six new regular roles (not including the Bio-Terrorist, which I’ll discuss later) that all add something a little different to your world-saving endeavours. The Generalist is nice, simple and effective – she gets five actions each turn rather than the usual four. Perhaps my favourite role is the Containment Specialist, who can remove a disease cube when he enters a city if there are two or more of the same colour – I call him the vacuum cleaner!

The eight new event cards in On the Brink are great and come with a new rule of dealing two event cards per player to the deck during setup (so the game isn’t overloaded with events). There are also a couple of blank event cards and role cards if you fell inclined to add your own creations to the game.

The expansion now allows for the game to be played with five players and also includes an extra seventh Epidemic card to play what is a near-unbeatable “Legendary” difficulty setting. While offering nothing to the game itself the plastic Petri dishes are a widely loved and thematic way to store the disease cubes.

One thing, which might get overlooked, is the On the Brink expansion comes with a plastic insert to organise and store everything from this expansion and the base game in a single box.

The Mutation challenge adds a fifth (purple) disease to the game that can appear unexpectedly and mutate! The Mutation challenge comes with 12 purple disease cubes, three Mutation Event cards that are shuffled into the player deck and aid the purple disease in spreading. Two Mutation cards are put into the infection discard pile, so they won’t come into play until after the first epidemic occurs, but once that happens things get interesting and tough!

This challenge adds a nice dilemma as you may feel like you can largely ignore the purple disease early in the game as it takes a while to establish itself but the mutations can be devastating and there are only half as many purple cubes as there are of the other diseases, which means if you become complacent you will lose the game in a flash, as I have found out myself!

This challenge pits one player, the Bio-Terrorist, against the rest. The Bio-Terrorist’s movements around the world are hidden from the team (and secretly logged on a location sheet) as he/she manually spreads the purple disease around the world. The Bio-Terrorist takes their turns in the gap between player’s turns and can take Infection cards and use them much like the players use Player cards to take flights or even infect cities remotely, but must also announce an airport sighting when doing so.

The Bio-Terrorist can also be spotted when in the same city as another player, and for an action that player can capture him/her (the Bio-Terrorist must then discard all their cards and perform an escape on a subsequent turn).

The purple disease also spreads through infections when a purple disease cube is in a city when that city card is drawn (just like in the Mutation challenge), but when the disease outbreaks it “flares-out” and the city that just had the outbreak is reduced to only having one purple cube on it – small mercies…

The Bio-Terrorist challenge often polarises lovers of Pandemic as some feel this game should be fully co-operative, but I love it! The hidden movement is intriguing and ratchets up the stress levels on the team as the Bio-Terrorist clings onto their location sheet with an evil smile.

Final Thoughts on Pandemic: On the Brink

The On the Brink expansion takes an already great game into the stratosphere and gives more modular options that take the gameplay and experience into new realms of fun and longevity. Simply essential.