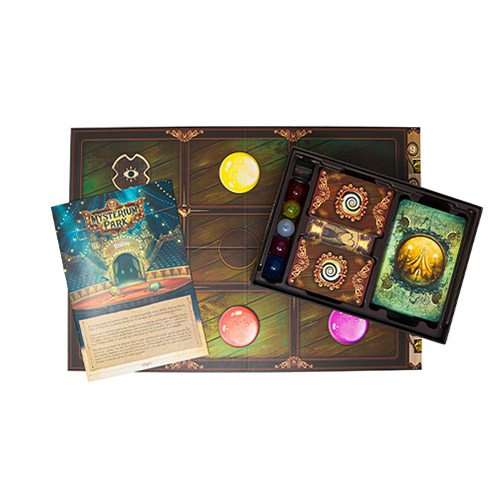 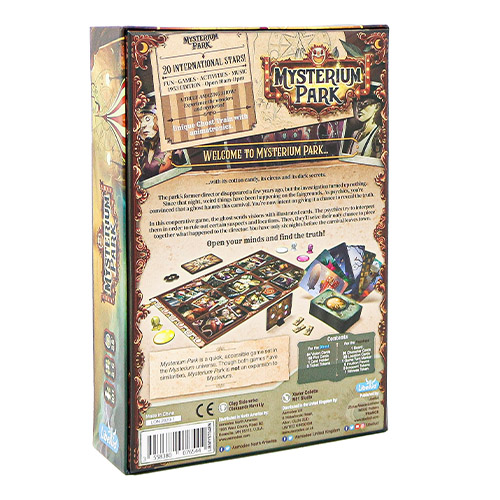 Mysterium ParkThe original Mysterium took the basic Dixit formula and drenched it in a seance/cluedo theme. One player would act as a recently murdered ghost and the rest would be psychics trying to work out what the ghost was communicating. And to communicate the ghost could only use these gorgeous artwork cards that could be interpreted in multiple ways! It remains a fantastic exp…
Read More
Category Board Games Tags Best Sellers, Libellud, Mysterium SKU ZBG-LIBMYST04 Availability 5+ in stock
Share
Share this
86%

The original Mysterium took the basic Dixit formula and drenched it in a seance/cluedo theme. One player would act as a recently murdered ghost and the rest would be psychics trying to work out what the ghost was communicating. And to communicate the ghost could only use these gorgeous artwork cards that could be interpreted in multiple ways! It remains a fantastic experience but one that could prove quite fiddly in terms of set up and upkeep.

Enter Mysterium Park, a streamlined, condensed implementation of the old game. Mysterium Park places the psychics in a fair trying to track down a ghost that is haunting the place. The ghost is trying to communicate to the players the identity of the witness as well as which innocent character they represent and the locations of those people.

Unlike Mysterium you do not need to identify a weapon. This is all done with the use of a 3x3 grid. Initially 9 character cards are laid out on the grid and the ghost has access to a key card which tells them which 6 characters are innocent. The ghost character then places the 3 unchosen characters to one side and repeats the process for locations. The three left over locations are paired up with the characters and then the ghost attempts to communicate the correct pair to the other players.

In simplifying the formula Mysterium Park becomes an accessible game that will see multiple plays in the same evening as players switch roles to see who is the best ghost. It removes some of the upkeep of the original game without removing the fun!

Mysterium Park. A travelling circus visits the town of Derry, featuring fabulous acts and famous performers. Along with the talent, comes the ghost of the ringmaster inviting you to save his soul and discover his murderer - allowing him to finally rest.

In this co-op murder mystery, the stakes are high. You and 1-5 friends (2-6 players) either solve the case and win together. Or you lose, leaving the case unsolved and the ghost stranded, drifting into oblivion… or until your next game.

In Mysterium Park, one player acts as the ghost, using cards that show the psychics which suspects and locations were not related to your death, while the other players act as psychics trying to decipher the cryptic visions about the ghost’s death. These are sent from the ghost in the form of vision cards. All players must work together and fast - as you will only have until the sixth round before the carnival packs up and leaves.

To solve their murder, the ghost lays out up to nine suspect cards, from which the psychics must retrieve the innocent character cards from, being guided by the surreal vision cards. Once all innocent suspects have been removed, round 2 begins, playing the same as with suspect cards, but for location cards.

While this does sound simple on the surface, the vision cards the ghosts presents are hard to decipher and with a maximum hand limit of 7 cards, the visions must always remain as specific and relevant for each psychic. If players make a wrong guess, they must guess again on the next turn until all players have made the correct guess for the game to continue.

Once all innocent suspects and irrelevant location cards have been removed, the ghost then lines up the three remaining suspects and locations. The ghost will then place a plot card facedown, which will reveal the true culprit once the psychics have made their judgments, directed by the ghosts final vision cards.

For anyone thinking about being the ghost, but put off by leadership anxiety, don’t panic! This game has you covered. All communication between the ghost and the psychics is forbidden, leaving you to communicate via the game cards; and occasionally saying yes or no when players make their judgements.

Visions from the dead

While the original Mysterium remains an incredible game and far from dead, Mysterium Park builds on what the original struggled with. The ghost’s original board from the first has been replaced by a streamlined ‘plot card’ system - allowing the ghost to know which psychic intends to uncover what information, without the need of duplicate cards. This massively speeds up the game. Fans of the original Mysterium will notice the removal of the clairvoyance track which significantly speeds up gameplay and improves chances of winning, as it gives more information to all players and makes winning a possible outcome.

So I am completely aware this will vary with different player groups, but an issue I always personally notice is that unless the Ghost is quick on their feet, or planning well in advance, you have to prepare for pauses. Being the ghost is hard, this isn’t something the game can sort out. In Mysterium, Mysterium Park and other games from Libellud that use a surreal image style as a form of communication, players may not always pick up on details or meanings that you intend them to. With some practise and a bit of luck when drawing a hand, being the ghost can be incredibly fun. It’s just daunting to start out as.

Anyone who has ever been a dungeon/game master for a band of murder hobos in a game of Dungeons & Dragons is aware how frustrating unpredictability is, but Mysterium Park thrives on this, just like most tabletop RPG’s do.

It’s impossible to say Mysterium Park was not made with love and attention to detail. Anyone that hasn’t been following the Mysterium game series will have no issue jumping into Mysterium Park. However, people like myself that have been with it since the start, may be almost underwhelmed having been used to the ghosts screen and the needless amounts of cards to use.

The more I type, the more I feel like I really haven’t put across my true thoughts about this game. Which is that I, and all who I play it with, love it. It truly is a great game; my criticalness may just be masked bitterness as I am prone to an element of drama by using the ghost screen that has been excluded from Mysterium Park. Regardless, this standalone game builds itself out of many issues presented by its predecessor and finds its way out of oblivion.

If you’ve had your eye on its development or only just heard of it, Mysterium Park is an incredible game for both gaming veterans and complete beginners.