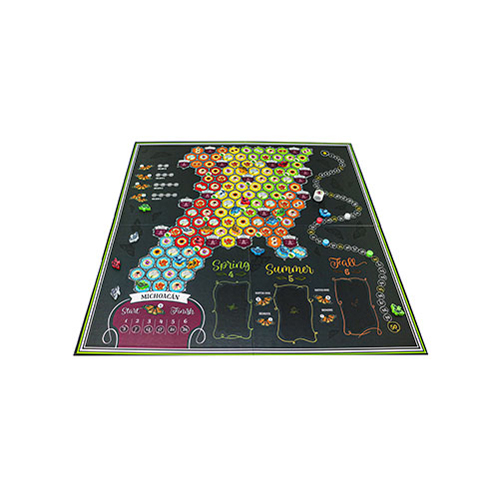 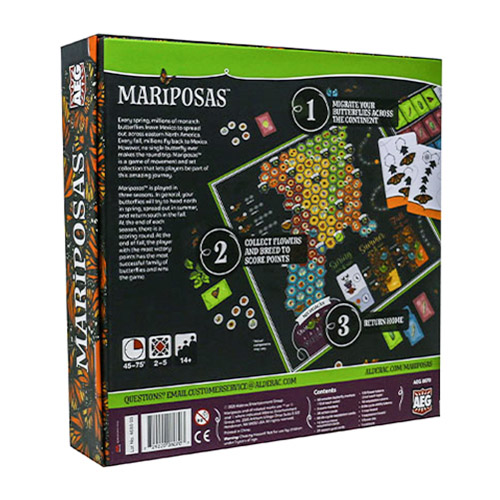 you could earn 1964 victory points

you could earn 1964 victory points

MariposasElizabeth Hargrave has exploded into the board game scene with her confident debut Wingspan, micro game Tussie Mussie and now follows it up with Mariposas, a beautiful board game about the migration of butterflies from Michoacán across North America.Mariposas is a sort of race, but a race of freedom. To score points you will not only have to spread out across the map, but …
Read More
Category Board Games Tags Alderac Entertainment Group, Best Sellers, Podcast Approved, Stunning Artwork, Value For Money SKU ZBG-AEG8070 Availability 3+ in stock
Share
Share this
94%

Every spring, millions of monarch butterflies leave Mexico to spread out across eastern North America. Every fall, millions fly back to Mexico. However, no single butterfly ever makes the round trip.

Mariposas is a game of movement and set collection that lets players be part of this amazing journey.

Mariposas is played in three seasons. In general, your butterflies try to head north in spring, spread out in summer, and return south in fall. The end of each season brings a scoring round, and at the end of fall, the player with the most successful family of butterflies — i.e., the most victory points — wins the game.

I’ll begin this Mariposas review by admitting that I have never played Wingspan. This isn’t through lack of trying. No-one I know owns it and it seems to be eternally out of stock. Add to that the fact my laptop that is too old and slow to run tabletop simulator and it begins to feel like the gods have conspired against me.

I mention this because, other than the buzz and awards for Wingspan, I come to this review with no previous experience of an Elizabeth Hargrave game. Yet it was her name on the box and the very gorgeous art and board that drew me to pre-order this one. I wasn’t missing out this time! But could it handle the weight of the two games’ worth of expectation I was piling on it?

First off, the game is stunning. Like a butterfly emerging from a chrysalis and gently opening its wings, lifting the lid reveals a riot of vibrant colour. The component quality is as good as what I’ve come to expect from recent AEG big box games like Ecos and Santa Monica.

There’s the usual custom meeples, or butterfleeples in this case. The board, sideboard and cards are a good thickness with a linen finish. Card components punched easily with no tears. But the cherry on the already sumptuous cake is the neon green storage pots for flower counters, which I’m reliably informed by my fellow bloggers are also in the Wingspan box.

In Mariposas, players take on the role of a group of Monarch butterflies as they perform their annual migration from Michoacán, Mexico up through continental North America and back again. On the way they feed, breed and die, hoping to grow their numbers enough to save their threatened species.

Over three seasons, players move their butterflies across the map using movement cards. As they travel, they collect blossom tokens which will enable them to breed if they find themselves next to a milkweed. Timing your breeding is important to make sure you can get the right amount of butterflies to the right areas on the board at the end of each season, in order to meet the objectives on that season’s scorecard.

Waystations (special preservation areas in major cities) provide another source of points. Landing on a waystation grants a life-cycle card or bonus card or flower. The former are worth a point at the end of the game and collecting a full set during the game provides players with a powerful effect. A point might not sound much but, believe me, in this game every point you can scrape matters. So far in my games, winning margins have been as tight as one or two points.

As the game moves into its final season, a starting pistol is fired as players frantically try to fly their fourth generation butterflies back to Michoacán where big points await. Or rather, it did in our first game. On reflection, we might have been better staying north to meet the scorecard objectives. Or maybe we should not have gone north at all and abandoned the season goals in favour of the big prize of getting home for winter.

These multiple strategies give variety and depth to what, on the surface, is a very simple pick-up-and-deliver, set-collection game. I liked that plans needed to be reactive to the season cards as they were revealed. Thematically it was easy to see how these differing goals represented differing climate conditions, buffeting and drawing the butterflies around the map.

The main strength of Mariposas is this flow. The way it gently creeps out of the starting gate and slowly blooms across the map before suddenly snapping back in is wonderfully thematic. It makes for a beautifully intricate and engaging gaming experience.

It is safe to say that Mariposas has utterly bowled me over. This is a game of small, exquisite details hidden beneath a sheen of gorgeous components and accessible gameplay. The obvious meticulous care that has gone into marrying theme to mechanisms - and then that whole parcel to an important environmental message - shows Elizabeth Hargrave to be an auteur of a designer. Like a work of art or novel, Mariposas perfectly expresses its ideas through its form.

It is also really good fun. There are plenty of decisions in the game and all of them are good. You always feel like you are achieving something no matter what you do. Every turn you get a resource. Most turns you get the choice to breed or not.  You can play as casually or competitively as you like and, even if you don’t win, you will be close.

Couple this with the fact that there is no blocking, no attacking, no stealing of a bonus that someone else can’t get. This all adds up to a game that is congenially competitive and inclusive of players of differing abilities and tastes. Mariposas did not get crushed by the enormous wheel of my expectations. It brushed them off and exceeded them with soaring ease.