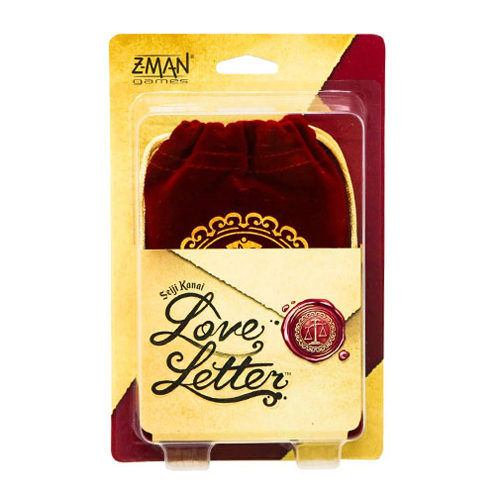 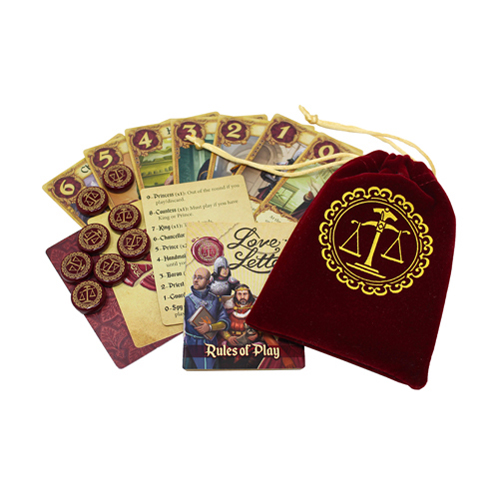 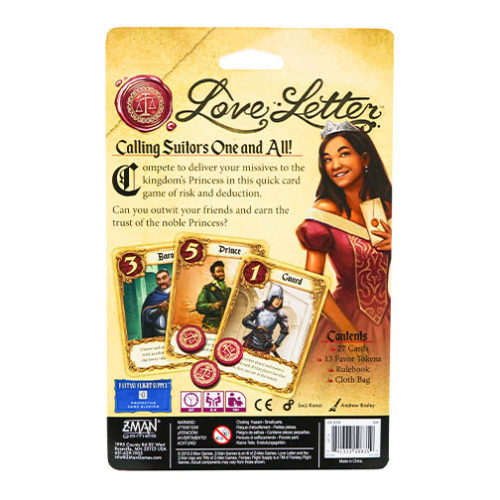 Add to Wishlist
Will your love letter woo the Princess and win her heart? Utilize the characters in the castle to secretly carry your message to the Princess, earning her affection. Love Letter is a game of risk, deduction, and luck. Designed by Seiji Kanai, the game features simple rules that create dynamic and fun player interactions. Players attempt to deliver their love letter into the Princess…
Read More
Category Board Games Tags Best Sellers, Dice Tower, Fun for Kids, Gifts Under 10, Golden Pear, Love Letter, Pick Up and Play, Platinum, Stocking Fillers, Valentines Day, Value For Money, Z-Man Games SKU ZBG-ZMGZLL01 Availability 5+ in stock
Share this
91%

Will your love letter woo the Princess and win her heart? Utilize the characters in the castle to secretly carry your message to the Princess, earning her affection.

Love Letter is a game of risk, deduction, and luck. Designed by Seiji Kanai, the game features simple rules that create dynamic and fun player interactions. Players attempt to deliver their love letter into the Princesss hands while keeping other players letters away. Powerful cards lead to early gains, but make you a target. Rely on weaker cards for too long and your letter may be tossed in the fire!

The course of true love never did run smooth – and if AEG’s Love Letter, a small but perfectly formed game of deduction for two, three or four players, can be taken as a typical example of human courtship, it’s not hard to see why.

For a game that requires just 16 cards (depicting eight different characters, ranked numerically according to their importance), there’s an impressive amount of backstory packed into the small rule book, but the short of it is that players are suitors competing to win the affections of a Princess Annette, who, distraught at the arrest of her allegedly treasonous mother, has locked herself away in the palace.

Now, whereas any self-respecting aristocrat would turn up beneath their beloved’s window of an evening and strum a tune or two on the lute (or even better, give her a bit of space till things calm down), here matters are rather more by the numbers: whoever can get enough of their love letters into her possession, via her family members and attendants, will catch her eye and secure her hand in marriage. Win a round and that’s one letter delivered – a few more and it’ll be time to start sending out the wedding invitations.

How do you play Love Letter?

As you would expect of a game of so few components, set-up is the work of seconds – it varies slightly depending on the number of players involved, but if there’s just two of you, you simply shuffle the cards, remove one without looking at it, deal three face-up in the middle of the table, then place the remaining deck face down in easy reach. Both players draw a card from the top to form their starting hand – and you’re ready to go.

Now the fun begins. Player one draws a second card and must then discard one of the two in their possession, setting it down, and leaving it, in clear view of their opponent. Each card has an effect to apply that might give you a idea of who’s hiding in your opponent’s deck; offering you respite from their prying next turn; or, indeed, ruining your carefully laid plans (you won’t want to play the cards that do the latter, but you won’t always have a choice).

When player one is done, it’s player two’s turn, and so on until all but one player is knocked out of the round, or the deck runs out – at which point whoever is holding the highest-ranked card is declared the winner.

Let me give you an example: Player one has drawn the Princess (value eight) – the highest-ranked card in the game, she’ll win you the round if you can keep hold of her till the end; unfortunately, if you’re forced to discard her, you’re automatically out. Player one then draws the Countess (seven) to complete his hand – she must be discarded if you’re holding the King (six) or a Prince (five)... but that doesn’t mean you can’t get rid of her anyway if you don’t, and in this case player one has no choice because the Princess is going nowhere. Down the Countess goes. 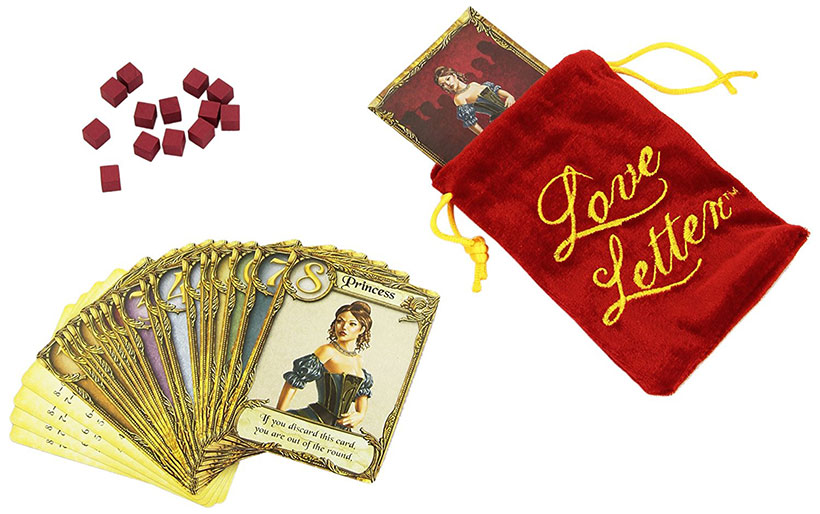 Player two first drew a Guard (one) and now picks up a Baron (three). The latter, once discarded, instructs you to choose an opponent and compare your hands – whoever’s is ranked lower is out. Player two has just seen player one lay down the Countess – if that means player one is holding the King or a Prince, the humble Guard isn’t going to cut it. So the Guard is sent into the fray. There are four Guards in the deck and they’re incredibly useful, as they allow you to take a guess at who your opponent is clutching – guess right and you’ve won the round with a minimum of fuss...

At this point, having decided player one is probably concealing either the King or a Prince, player two is likely to name one of these cards. If she does, player one will be able to reply smugly, ‘Nope, sorry!’ and draw his next card. However, player two, acting on a mischievous hunch, might just decide to guess ‘Princess’ and take the round.

Love Letter is full of these interactions, and as the turns go by and it becomes clearer what cards are most likely to be hiding in the deck and each player’s hands, it becomes ever more important to make smart decisions, if you can.

Love Letter might not come with a stack of components, its theme might not necessarily fire your imagination, but gameplay is king and thanks to its elegant design, it’s great fun. Card effects are varied and they interact in ways that mean both educated guesswork and shots in the dark are needed to emerge triumphant. Players are constantly engaged, trying to bluff convincingly or deduce what their rivals are hiding, and because it’s so fast there’s little time for anyone to get bored, even in a four-player game – and even if you’re eliminated early on.

Due to the random nature of the draw, some rounds end up more satisfying than others, but for every occasion players are knocked out in just a turn or two, there’s another that goes down to the wire, with no one certain who’s hiding what until the last minute. Sometimes the quick rounds are the funniest, in any case – playing a Guard first up three rounds in a row and guessing who’s hiding in your opponent’s hand correctly each time never gets old.

There is a lot of scene-setting, as mentioned (the world in which it’s set has even spawned several, slightly more involved games, for example, Courtier), but the theme has little bearing on proceedings. This isn’t a problem, though, given that the gameplay is both compelling and simple enough that there’s always the temptation to return for ‘just one more go’.

It’s worth stressing the merits of owning such a simple game too – Love Letter is ideal when free time is in short supply, or when you’re looking for something to throw into a bag for a trip away. For these reasons, in our house it’s down from the shelf more than any other game, and it’s showing no sign of getting dull – not bad for an investment of less than a tenner!

Note – there are three versions of Love Letter out there: the cheapest (the version reviewed), which comes in a rather fetching draw-stringed pouch; a slightly more expensive boxed version; and a premium edition, which features larger cards and caters for up to eight players rather than the original four – all are worth the asking price when you factor in the amount of play time it’ll give you.