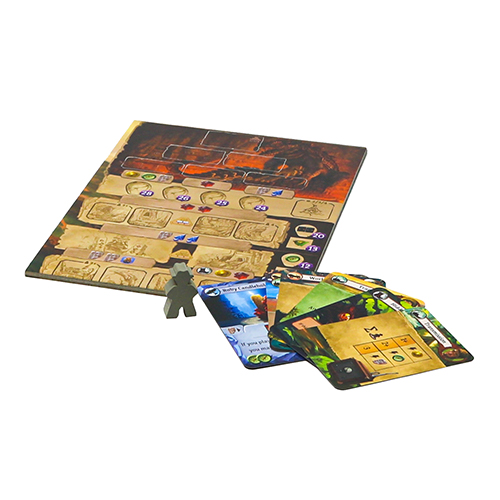 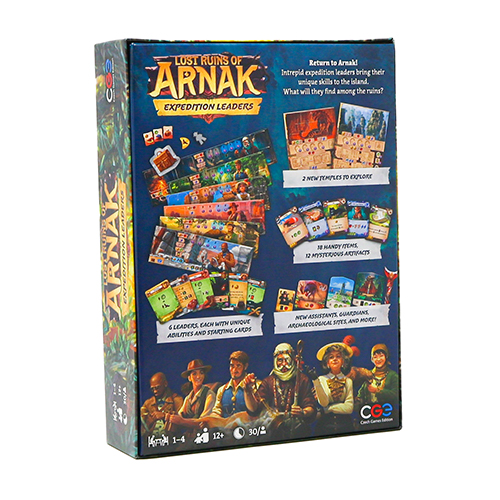 you could earn 2589 victory points

you could earn 2589 victory points

Return to the mysterious island of Arnak in Lost Ruins of Arnak: Expedition Leaders! Give your expedition an edge by selecting one of six unique leaders, each equipped with different abilities, skills, and starting decks that offer different strategies and styles of play for you to explore. In addition to the leader abilities, which bring a new element of asymmetry to the game, this…
Read More
Category Board Games Tags BGG Golden Geek, Zatu Gold Award SKU ZBG-CGE00063 Availability 3+ in stock
Share
Share this
88%

Return to the mysterious island of Arnak in Lost Ruins of Arnak: Expedition Leaders!

Give your expedition an edge by selecting one of six unique leaders, each equipped with different abilities, skills, and starting decks that offer different strategies and styles of play for you to explore.

In addition to the leader abilities, which bring a new element of asymmetry to the game, this expansion contains alternative research tracks that offer even more diversity and a bigger challenge, new item and artifact cards to create new combos and synergies, along with more guardians & assistants to meet and sites to explore.

Please Note: This requires a copy of Lost Ruins of Arnak to play.

Lost Ruins of Arnak is a one to four-player deck building, worker placement game from designers Min & Elwin and published by Czech Games Edition. Lost Ruins of Arnak: Expedition Leaders is an expansion for the core game and brings variable player powers and starting decks, new research tracks, items, artefacts, guardians, and new assistants. It expands the core game with relative ease without many additional rules. This review will just cover the expansion but if you want to check out my review of the core game then you can do so here.

At the start of the game, players can choose which research track they want to use. It is double-sided for added variety and there are some new tweaks to the way the track is utilised. You can purchase certain temple tiles from lower down the track and there are new obstacles, paths, and costs to advance as you advance up the track as well as differing rewards.

In addition to the research track, each player will play a certain character with a unique power. Players can select, draft or be dealt a random player power as they choose. Each character comes with their own player board, starting deck of cards and tokens specific to them. The new starting decks contain character-specific cards and will replace the starting decks from the core game.

The rest of the components (assistants/artefacts/equipment) can pretty much be shuffled into the base game from the start.

If you have not read my review of the core game, then please go back and give it a read. The long and the short of it is, I love this game. The combination of the deck building, and worker placement just hits all the right spots for me. I love the combos and the free actions and then the choice of discovering new sites, overcoming guardians, advancing on the research track just gives me enough of a mental workout that I felt satisfied but not too taxed.

So, how does the expansion change the game? Well, for the most part, the new guardians, assistants, items and artefacts are just more of the good stuff that was already present. New cards give you more ways to potentially combo and create synergies which leads to more strategies. The new cards fit seamlessly into the core game without any issues. There are some good cards that are fun to play with and explore. Nothing revolutionary but simply more content which is always a welcome addition for any expansion.

Power To The Players

The introduction of player powers is fantastic. I love variable player powers and unique setups. Having a starting deck that is different to your opponent's keeps things interesting. I really liked how they have staggered the difficulty of the powers as well. You can select or play a power that you are comfortable with or that suits your play style. The powers are fairly varied as well giving you a different strategy and approach to the game. For example, the captain as an additional worker, the Falconer has an additional token that moves on a track on her board giving different powers/abilities, the Baroness has an additional supply of gold each turn. With the new cards mentioned above and the new player powers, there is even more to explore and delve into.

The two new temple tracks mix up the pre-printed ones in a fun and interesting way. There are new obstacles to overcome, such as Guardians and specific routes your research token and notebook need to take. The rewards have also been changed, sometimes giving you a bonus and sometimes a penalty. I think the new research tracks makes some of the other strategies more viable as the new tracks feel harder to progress up and not always as beneficial. One of the interesting new features of the temple tracks is that you don't need to reach all the way to the top to be able to buy temple tiles. I really enjoy the new temple tracks, both sides offer different routes and strategies to pursue and give you a different feeling each game.

Everything in the new expansion works very well. It integrates into the core game with ease and the new mechanisms really elevate the game. I would even teach the game with the expansion combined for new players. Expedition Leaders is a great expansion to a game that I already really enjoyed and is a must if you were a fan of the original game