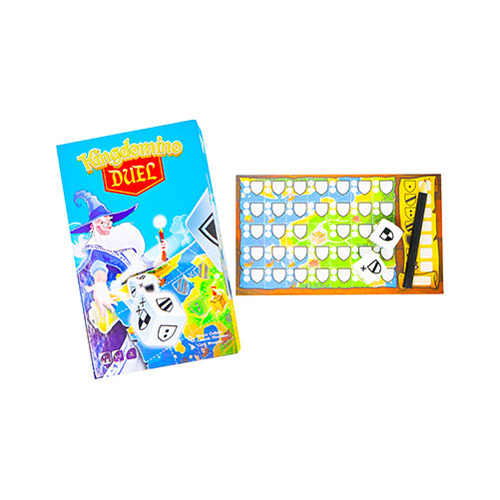 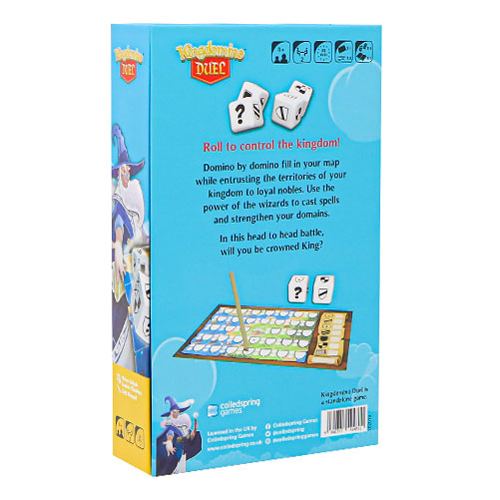 you could earn 2109 victory points

you could earn 2109 victory points

Kingdomino Duel is a dedicated two-player game based on the bigger box tile laying games, Kingdomino and Queendomino. Kingdomino Duel replaces the tiles with dice, but interesting keeps the tile laying mechanic, as you have to combine the faces of the two dice you roll into one “tile” which you draw onto your sheet. Essentially, the dice are there to randomise what the tiles cou…
Read More
Category Board Games Tags Blue Orange, Bruno Cathala, Great For Two, Kingdomino, Ludovic Maublanc, Zatu Silver Award SKU TCS-KINGDOM_DUEL_UK Availability 5+ in stock
Share
Share this
76%

Kingdomino Duel is a dedicated two-player game based on the bigger box tile laying games, Kingdomino and Queendomino. Kingdomino Duel replaces the tiles with dice, but interesting keeps the tile laying mechanic, as you have to combine the faces of the two dice you roll into one “tile” which you draw onto your sheet. Essentially, the dice are there to randomise what the tiles could be and of course allow Kingdomino to enter the roll-and-write universe.

Your goal is to fill your map with your domino’s, grouping the different symbols as best you can. Each symbol on the dice is a coat of arms which represents different domains in your kingdom. Some of the dice also have a cross on them representing a dignitary who lives in that space. Points are awarded at the end of the game for each domain, with every space in that domain multiplied by the number of dignitaries.

Each time you add a coat of arms without a cross you can fill in a square in your spell book on the reverse of the kingdom map. The first player to fill each line of spells can then use that power. This gives you the opportunity to lay your dominoes in “rule breaking” ways. Such as not worrying about matching one of the coat of arms you are laying to another space with the same symbol, or splitting your domino back into two dice and laying them separately.

Kingdomino Duel is a fun standalone roll and write game that plays quickly and is a nice filler for two players.

It may come as some surprise to you that I have never lost a duel to the death, ever. This is chiefly because I have never had the gauntlet laid down in front of me. However, remove the risk of dying and I duel most days of the week. My weapons of choice are dice or deck and I take on all comers! With this in mind I was eager to try out Kingdomino Duel, a roll and write by Bruno Cathala and Ludovic Maublanc with artwork by Cyril Bouquet.

Yeah, you probably do recognise those names, they are big hitters in the board game world. Between Cathala and Maublanc you have games like Jamaica, Conan, Five Tribes, 7 Wonders Duel, Ishtar and Draftosaurus. If you bred horses you would say that’s a pretty good pedigree. Well, you wouldn’t if you bred horses, as neither have won Ascot or the Grand National, so perhaps that was the wrong analogy. If you bred board games however, you would want them in your stud farm.

If I’m honest, this introduction has gone in the wrong direction. When I started, it was going to be all about gentlemen duelling and instead I’m thinking about horses mating. So, I would like to move swiftly on to the review…

How to Draw Your Weapon

Kingdomino Duel is a two player roll and write. Each player takes a sheet of paper from the pad and this forms your map. Players take it in turn to roll four dice. The person who rolls gets first dibs and chooses a single dice. The other player gets to choose two dice leaving one remaining for the original roller. The dice are mentally conjoined to form a two-section domino tile that you must place on a map. You do this by drawing the symbols onto your player sheet.

There are certain placement restrictions, similar to those in Kingdomino. Tiles must either touch the central castle, or touch orthogonally a matching symbol on the players map. Instead of different types of land in the original game, the dice have different heraldic shields.

Some dice have crosses next to the coat-of-arms. These crosses make your shields worth more at the end of the game. Crosses multiplied by the number of matching adjoining symbols is the value of that ‘land’. However, picking up a symbol without a cross allows you to move closer to activating a special bonus.

One bonus sheet is used per game and are on the back of the player sheets to save on wasted paper. Every time you have a cross-less symbol you mark that type of dice off your side. The player who gets to the centre of the sheet first gains the bonus to use in the game.

These bonuses allow you to do things like split your two dice when placing them, or add a cross to any coat-of-arms, or not follow orthodox connection rules that can make a big difference in the game.

The game ends when the sheets are full up or neither player can place a domino on their sheet. The player who tallies the highest score is the winner of the Kingdomino Duel!

Those familiar with Kingdomino will probably pick it up a little quicker than those that haven’t. Placing the dominoes takes a bit of planning and a little bit of luck. Despite the dice rolling, you largely feel like you are in control of your own destiny. Especially with the way you alternate drafting dice.

When playing, the game feels gentile as you roll, pick and draw throughout each turn. If it weren’t for the bonus sheet the game might feel a bit of a plod. The bonus sheet of Wizard Abilities changes what you do in a good way. You might for example, take a less valuable dice just to stop your opponent reaching the bonus. This ramps up the decision making process and adds further exciting strategy to the game. Successful bonus gathering can mitigate some of the luck inherent with throwing dice.

Games last about twenty minutes and it never outstays its welcome. However, it is unlikely to get you on the edge of your seat. It is more likely to be enjoyed while drinking coffee on a Saturday morning with your partner. You will be interacting when choosing your dice and battling for the bonuses, but like many roll and writes you will be playing in quite an insular way for much of it.

Scoring is a bit of a faff. The adding up and basic multiplication is fine, working out the territories in which to score is considerably harder. Particularly if you compare it to the colourful and easy scoring in Kingdomino. Younger players and some older ones, will need help working out the scores.

Looking Down the Barrel (into the Box)

Before I go any further I have to mention the box. This isn’t just any piece of cardboard encompassing a game. Kingdomino Duel comes in an amazing rigid clamshell case that has the most satisfying magnetic clasp you could hope for. Nestled in this is a removable insert that keeps everything snug. Easily removing this means you have a dice tray on the go. Form follows function but incorporates luxurious beauty.

Aside from the box lust, my game came with a pad of 100 score sheets. Yes, I did count them all! Which is obviously enough for 50 games. If you are going to play a lot of roll and writes you may need to invest in a laminator. If this will be your only roll and write, it is probably cheaper to buy another copy of the game, if the supply runs out! You could try asking the publisher if you run out too I suppose.

The pencils are fully functional but you will inevitably need a sharpener at some point, that is not included. The custom ‘domino’ dice are bigger than a standard D6 and feel chunky in the hand.

The rules are clear and concise, but like I said previously, you will have a better grasp of the concept if you have played Kingdomino.

I can’t help but draw comparisons with this game and Kingdomino. The latter I love and would be in my hall of fame for games! Kingdomino Duel doesn’t quite reach the same dizzy heights, but is a very good two player option. I have to say Kingdomino is a good two player option too. It feels like the two games have very similar roles on the gaming shelf. Because of the accessibility and colourful flair of Kingdomino I think I will still more regularly gravitate towards it.

I am certainly glad to have it in my collection as a quick and transportable two player option. It is a perfectly enjoyable game. That’s certainly the reason it was voted ‘Best New Dice Game’ by the judges at the 2020 UK Games Expo.

I really enjoy the race to the bonus so-called Wizard Abilities. I find the dilemma around this the most interesting part of the game.

Kingdomino Duel is not pocket-sized. However, it is certainly small enough to put in a rucksack and take away with you on your travels. The small gameplay footprint makes it an ideal game to play at a pub or restaurant. It would also be good on one of those oh-too-small tables you find in hotel rooms.