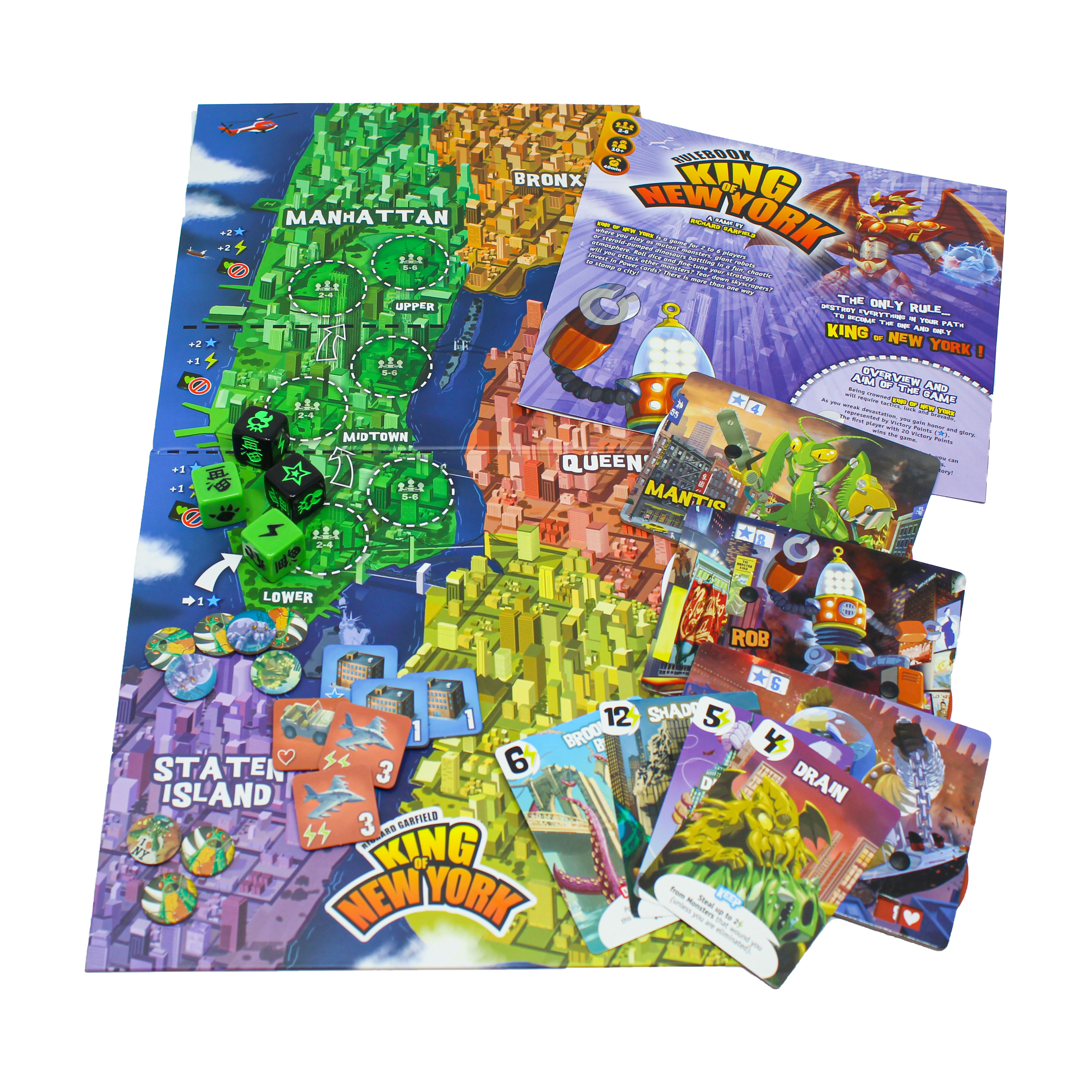 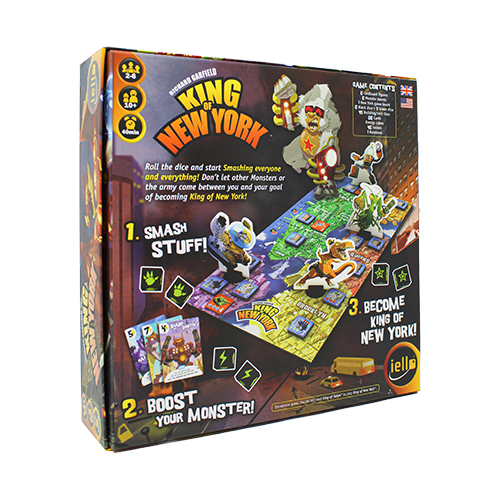 We’ve all, at some point, dreamed of making it big in the Big Apple that is New York, to be admired and adored by everyone. Even great big, destructive, monsters long to be the most famous monster the city has ever seen. In King of New York, from IELLO and the King Kong of game design Richard Garfield, you can make the monster’s dream come true. This standalone game is m…
Read More
Category Board Games Tags 9-11 Years, Dice Tower, Iello, Richard Garfield, Teens, Zatu Silver Award SKU ZBG-IEL51170 Availability 3+ in stock
Share
Share this
78%

We've all, at some point, dreamed of making it big in the Big Apple that is New York, to be admired and adored by everyone. Even great big, destructive, monsters long to be the most famous monster the city has ever seen. In King of New York, from IELLO and the King Kong of game design Richard Garfield, you can make the monster's dream come true. This standalone game is much like it's older sibling, King of Tokyo, with two to six players chucking satisfyingly chunky dice Yahtzee style in order to reach the best outcome on their turn. The best outcome in this case being what brings your monster most fame or attack points - as the only ways to win the game are by either gaining 20 fame points or by ensuring you are the last monster standing. King of New York comes with whopping monster standees and a larger playing board than it's big sis, which is split into five suburbs. Within each suburb, there are numerous building tiles that players can smash in order to gain health, fame or power cubes. All good for a burgeoning career as a monster, right?! However, be aware that once you attack a building, the military will retaliate by sending in units (on the opposite side of the building tiles) that will attack on a bad roll. The most lucrative suburb is, of course, Manhattan and players will battle it out for dominance here, but they must also be strategic in deciding when is the best time to duck out in order to heal up as they are unable to do so while in Manhattan. They also find themselves as the target of all other monster's attacks. The game comes with power cards that can prove to be game changing if the right ones are picked at the right times. Along with these power cards, players will also vie to obtain the Superstar card, which will grant the owner of it fame stars for each star rolled. But beware, this card can be stolen at any time. It's time for an almighty clash to finally decide who is the true King of New York. Player Count: 2-6 Time: 40 Minutes Age: 10+

In King of New York, you play a B-movie monster aiming to destroy both New York and the other players’ monsters. This is achieved by rolling and re-rolling oversized custom dice to achieve certain actions.

It's a fairly light and quick game (2–6 players, with 40-minute play time and a four page rule book). The strategy comes in balancing your health, grabbing power-ups or storming Manhattan which quickly builds rewards but leaves you exposed to other monsters and unable to heal.

Victory is achieved by either being the last monster standing or being the first to 20 victory points. But let's face it, in a game where you play a giant destructive monster who can smash other monsters to a pulp, if you're going round collecting victory points then you're playing this wrong. Though perhaps that's why I invariably lose!

As you may be aware, this is a Richard Garfield follow-up to King of Tokyo. If you've played that, you'll know what to expect. The main difference being that instead of rolling numbers for victory points, you demolish buildings (which in turn spawn army units that can attack you and others).

The box gives you a good understanding of what to expect, featuring several fairly generic B-movie monsters such as a dinosaur and an oversized insect. When you open it, you see the small game board, the large cardboard monster standees and mini player boards, power-up cards, green cubes, a variety of tokens and, best of all, the oversized custom dice.

Set-up is quick and easy – with the decision of which monster to play taking the majority of the time (and when I tell you that this is a purely cosmetic decision with no gameplay differences between them, it really illustrates how quick the set-up is). The rest of it involves shuffling a pile of cards and dealing three out, pouring the green cubes from a bag and then putting the building tiles into piles of three in each borough on the game board.

How do you play King of New York?

The game largely centres around a risk/reward mechanic based on location within New York. Each monster picks a borough to start in, outside of Manhattan, and the first player will move to Manhattan at the end of their first turn. This grants bonuses at the start of each turn (which grow the longer you remain there) and when you attack, your attacks hit all other monsters. The downside? All monsters’ attacks will target you, you can't heal there and you can only leave (if you choose to) when you're attacked.

You start with 10 health and zero victory points. As mentioned above, the obvious aim is to not die (avoid your health depleting to zero) and to achieve 20 victory points, or see all other monsters fall.

The meat (and fun part) of the turn is grabbing a big handful of those big black dice and hearing them clunk down on the table as you roll. Several times. Well, up to three times each turn until you have a set of results you are happy with, or have used both re-rolls.

What do the dice symbols mean?

Anything else to do other than roll dice?

Once you've resolved the dice results, you have two more optional actions you can take. Firstly you can choose to move to a different borough. The final option you have before passing on those dice is choosing whether to buy a card. Each card will cost a different amount of cubes, and can be one-shot (discard) or permanent.

The cards are extremely thematic and give a wide range of effects, including gifting you certain mutations (which could allow you to use an extra dice, or grant more re-rolls), allowing you to cover opponents in webs when you attack (costing them re-rolls), or simply grant victory points.

King of New York is a really fun game. It's simple to learn, quick to play and has a good mix of luck and skill determining the outcome. Turns pass quickly, but there is strategy in deciding if you're going to try to roll for healing, attacks or cubes, and then making the most of those times when you of course roll the opposite.

The core mechanic around Manhattan rewards is compelling. You know you should leave to heal as you're low on health. However, if you stay there for just one more turn you could kill everyone, or get that bonus cube to get that really great card you’ve been eyeing up.

There can be a real feeling of suspense when you're down to your last health and you are waiting on your opponent's last roll, praying they don't roll the attack symbol. Or you have planned out your moves knowing that grabbing a certain card will win you the game and waiting to see if they spot it and take it first.

The theme is great too. Large standee monsters (albeit cardboard). Big chunky dice. Light-hearted fun cards that give power-ups that could be from any one of the old Japanese B-movies (laser eyes, for example). Who hasn't watched Godzilla and thought how fun it would be to be that monster?!

There is no requirement for interaction within King of New York, but as your actions affect others, there is a lot of natural interaction that occurs when someone attacks you and you're all shouting for different outcomes, or they grab the card you were saving for.

King of New York is one of those games that you can bring out on any occasion and will go down well. It's enjoyed by those who don't play many games due to its simplicity and quick play time. It's also a great game to start, or end, the night with for those heavier gamers. Kids love it too, due to the theme and big dice.