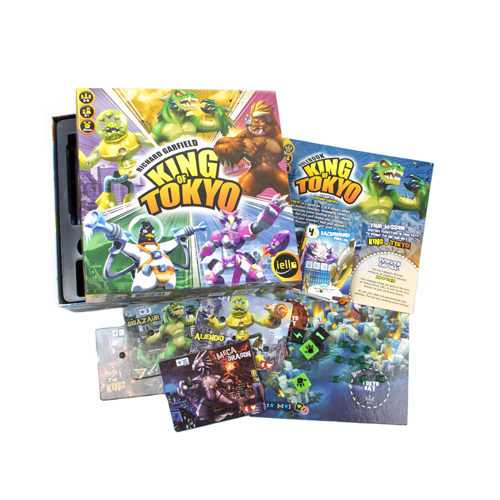 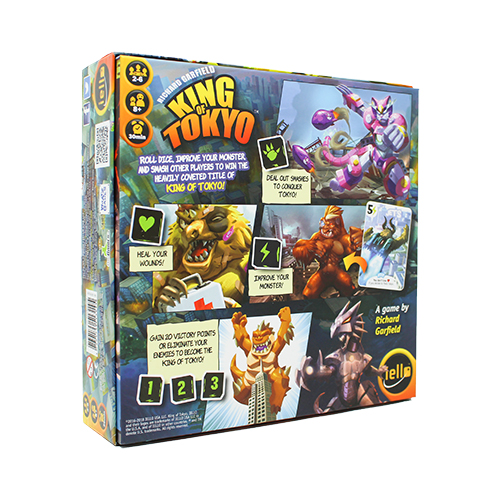 you could earn 2395 victory points

you could earn 2395 victory points

In King of Tokyo, you play mutant monsters, gigantic robots, and strange aliens—all of whom are destroying Tokyo and whacking each other in order to become the one and only King of Tokyo. At the start of each turn, you roll six dice, which show the following six symbols: 1, 2, or 3 Victory Points, Energy, Heal, and Attack. Over three successive throws, choose whether to keep or d…
Read More
Category Board Games Tags 9+, Best Sellers, BGG Golden Geek, Dice Tower, Fun for Kids, Golden Pear, Podcast Approved, Podcast Episode 27, Podcast Episode 28, Zatu Gold Award SKU ZBG-IEL002 Availability 3+ in stock
Share
Share this
89%

In King of Tokyo, you play mutant monsters, gigantic robots, and strange aliens—all of whom are destroying Tokyo and whacking each other in order to become the one and only King of Tokyo.

At the start of each turn, you roll six dice, which show the following six symbols: 1, 2, or 3 Victory Points, Energy, Heal, and Attack. Over three successive throws, choose whether to keep or discard each die in order to win victory points, gain energy, restore health, or attack other players into understanding that Tokyo is YOUR territory.

The fiercest player will occupy Tokyo, and earn extra victory points, but that player can't heal and must face all the other monsters alone!

Top this off with special cards purchased with energy that have a permanent or temporary effect, such as the growing of a second head which grants you an additional die, body armor, nova death ray, and more.... and it's one of the most explosive games of the year!

In order to win the game, one must either destroy Tokyo by accumulating 20 victory points, or be the only surviving monster once the fighting has ended.

King of Tokyo is a press your luck dice game, designed by legendary designer Richard Garfield (creator of Magic: The Gathering, Robo Rally and many more).

The game contains additional elements in the form of cards and area control, though these are not primary aspects, which contribute to the premise of the game in a seamless manner.

King of Tokyo - The premise

The city of Tokyo is being ravaged by mutant monsters, rampaging robots, aliens and even an abominable space penguin. You are in control of one of these monsters and your mission is to become the King of Tokyo, by any means necessary. Subterfuge, collusion or primal aggression are all routes to victory.

You become King of Tokyo by claiming 20 victory points or by using your claws, lasers or spiked tails (or shrink rays, or fire-breathing, or poison spit, or nova breath, or, or, or...) eliminate your enemies.

Who will be the king of Tokyo? The dice will decide...let the battle begin!

To begin the game each player selects a monster and takes their respective Monster Board and Monster Figure. The Monster board is used to keep track of Monster Life Points and Victory Points. The monster figure is used to represent the monster location (inside or outside of Tokyo). All monsters start outside of Tokyo.

Next, the Tokyo board is placed in the center of the playing area The Tokyo board represents the city of Tokyo split into two locations - Tokyo City and Tokyo Bay.

Being inside of Tokyo City has both positive and negative effects, which need to be balanced for maximum value.

Power cards are then shuffled to form a deck, and the top three cards are placed face-up. Power cards are improvements for your monster or current position. They have various effects on the state of the game or other monsters.

The six Black dice and two Green dice are then separated and placed into two piles. The six black dice are the standard ammunition to attempt dominance. Certain power cards will allow monsters to add (green) dice to their rolls, or reduce the total number of dice to roll below six.

Energy cubes and tokens are placed in accessible piles for all players. These cubes are used to purchase power cards and other tokens are used to represent certain game effects.

To decide who starts each player rolls the six black dice and whoever has the most starts the game.

On each players turn, they can roll the dice up to three times. No player is forced to take all three rolls. On the first roll, roll all six black dice (and any additional green dice if you have a power card). For the second roll you can set aside any dice results you want to keep, and re-roll the balance of the dice. On the last roll, you can re-roll any dice, including the ones set aside during the second roll.

You can resolve dice in any order, but you MUST resolve all of them. The symbols on all dice represent the actions for your turn:

Coronation of a new King

The first monster to reach 20 Victory Points or is the last monster standing will cause the end of the game. This monster will be crowned King of Tokyo and receives bragging rights until the next game has been completed and a new King is crowned.

Final Thoughts on King of Tokyo

King of Tokyo is a captivating, entertaining and down right ridiculous way to spend 30 minutes of your life. Smashing a giant space penguin in the face with a spiked tail with my robot cat is probably the most fun I have had for a long time while rolling dice.

The game provides multiple avenues to victory and the power cards fuel these strategies with a surprising amount of depth. Since the mechanic is press your luck, you never feel cheated by the dice, which can be a bitter pill to swallow with other games. Various draws of the power cards make each game feel unique and familiar at the same time. The art for the game is as wacky as the premise, but is well executed to provide an attractive experience.

The components are of mixed quality, the dice being best and others fit for purpose. The game can be expanded with the Power Up Expansion to provide some additional depth, though the game is excellent as a standalone.