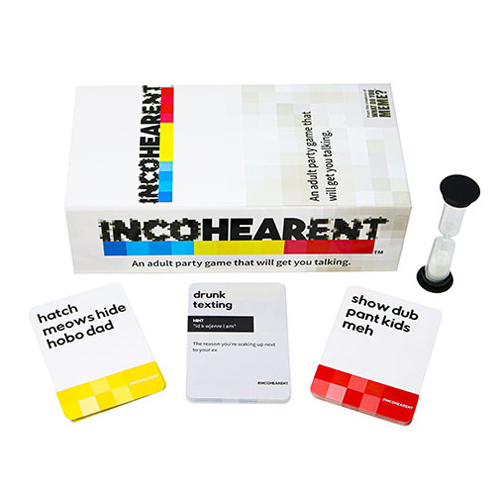 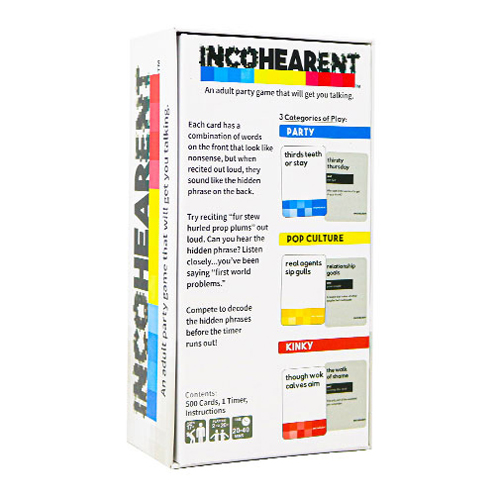 Incohearent is the adult party game by What Do You Meme? that will get you talking! Let the laughs begin as you compete to make sense out of gibberish from one of three categories – kinky, party and pop culture. Each card has a combination of words on the front that, when recited out loud, sound like the phrase written on the back. For example, try reciting “thirds teeth…
Read More
Category Board Games Tags Family, Fun For All the Family, Value For Money, VR Distribution, Zatu Gold Award SKU ZVR-ICH413 Availability 5+ in stock
Share
Share this
87%

Incohearent is the adult party game by What Do You Meme? that will get you talking! Let the laughs begin as you compete to make sense out of gibberish from one of three categories - kinky, party and pop culture.

Each card has a combination of words on the front that, when recited out loud, sound like the phrase written on the back. For example, try reciting "thirds teeth or stay" out loud. Can you hear the hidden phrase? Listen closely... you've been saying "thirsty Thursday."

Perfect for parties, game nights, holidays, reunions and more. Adults only: This game is intended for ages 18+ and contains mature language and references.

NOT intended for children - trust us on this one

What ever your thoughts about mass market style party games, there is no denying we like them. Especially the ones that let us be a little bit naughty. Incohearent is the latest title from 'What Do You Meme?' the team behind the game of the same name. What Do You Meme? is consistently in the top 3 sellers for Zatu each month and Cards Against Humanity is hugely popular. How does Incohearent stack up? Read on!

Cards on the table - I'm not a huge fan of so called 'adult' party games. I find that once the shock factor wears off you are left with not much of a game, and a growing sense that you should feel a little bit guilty at having laughed at such crass stuff. That being said there are alway exceptions to the rule and I've found Trial by Trolley to be a really fun and interesting experience whether the more risqué cards appear or not.

That's mainly because there is more of a hook to the premise. It's not just about shock factor - there is a genuine moral and philosophical dilemma behind the gameplay. It's not something I find in CaH or many other adult party games. Incohearent, however, did hook me in with its premise. That being the rejigging of popular phrases and culture into non words that sort of sound like their inspiration.

Incohearent reminds me of the languages we use to make up as children. Or toddlers learning to talk. So to give you a poor, made up example, 'Vel kim du myp eue' would be 'Welcome to my review'.

What Do You Mean?

This is definitely not as easy as I thought it would be. Most clues require you to say the phrase over and over again. You need to experiment with running the words together in different ways until you catch a word you recognise. And while this sounds counter intuitive it is actually where the fun lies. All of a sudden everyone is repeating this ridiculous sounding phrase in different accents, speeds and styles. It's hilarious. Then out of the cacophony of noise you hear something that sounds like the answer!

It goes without saying that this works better with some of the phrases that it does with others. There are some really duffers in the box, but happily for the most part the phrases get successfully solved. This initial box does feel more America in flavour, and I wonder if some sound better with an American accent. Again, though, the large majority of cards I sampled in my plays were absolutely fine.

A Bit of Blue

Incohearent is a self proclaimed adult party game, and it's fair to say it plays up to this. There is a whole deck of cards designated 'kinky'. These range from the mild and innuendous (sausage party) to the unrepeatable in polite company. Having said that I found a large chuck of cards I could happily use with my 9 year old. This took prior prep as he was desperate to snag a look at ruder cards. It's worth noting that other games have had far naughtier content with a lot less labelling. To find the opposite here was a bonus.

Incohearent will definitely split opinion. My non gaming wife hates its very concept declaring it 'not a game'. The irony of a non gamer using such a gamer snob term was not lost on me. I can see what she means. The rules are so thin they barely exist. If you are looking for a game to keep scores in or have highly defined rules for edge cases this is not it. But if you are just looking for a bit of silliness to break up the point chasing and dice rolling then there is a lot to enjoy here.

Incohearent really surprised me. The core activity of guessing the phrases is engaging and fun. It definitely helps to have your tongue loosened through a little alcohol or excessive sugar, but can still be enjoyed without. I have used the cards in a variety of settings from live with family to over Skype and video calls. We are in lockdown but Incohearent works really well through virtual settings. Whether it's sending pictures of the cards in WhatsApp, or reading them out over FaceTime.

Ultimately you will know whether this is a game for you and your group or not already. If you are already worried about whether it's a game or not, that might be your answer. But if you are looking for a fun activity to pass the time in a humorous way then Incohearent is a perfect solution. The rules are thin but give you freedom to play a few cards or a load at once. It is also easy enough to 'censor' some cards either as you play or before hand. For me this completes my 'adult' game collection sitting proudly next to Trial by Trolley in the shelf.