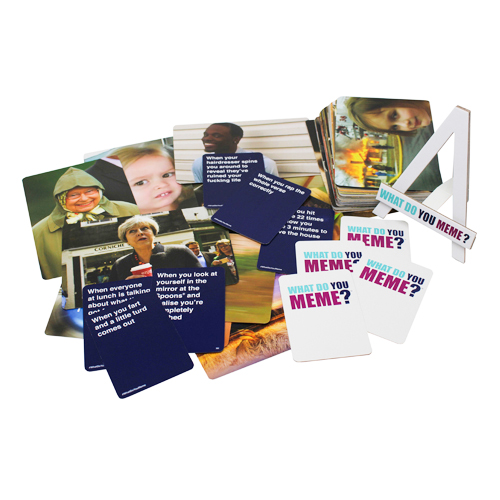 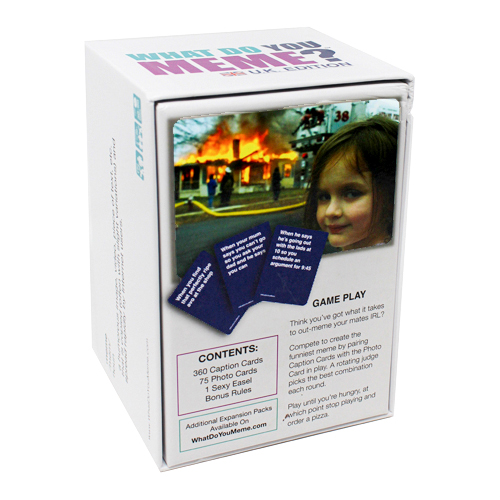 What Do You Meme? UK Edition

Party games are really popular right now, especially those containing edgy content. What Do You Meme: UK Edition certainly falls into that category. This UK Edition of What Do You Meme? is bigger, better and naughtier than the original game. It brings 435 new cards to the table, including: • 360 Caption Cards. • 75 Photo Cards. The rules could not be any easier. A player selects…
Read More
Category Board Games Tags Best Sellers, Big Groups, Podcast Approved, Top 20 Party Games, Value For Money, VR Distribution, What Do You Meme? SKU ZVR-WDYMEME Availability 3+ in stock
Share
Share this
90%

Party games are really popular right now, especially those containing edgy content. What Do You Meme: UK Edition certainly falls into that category.

This UK Edition of What Do You Meme? is bigger, better and naughtier than the original game. It brings 435 new cards to the table, including:

The rules could not be any easier. A player selects a Photo Card and everybody else puts down (face-down) the Captions that they believe best suits the photograph. The Judge of that round then chooses their favourite Caption from those put down and points are awarded to the winner.

Next round. New Judge. New Picture. New Captions. Repeat this formula until you can’t laugh anymore!

It’s time to get your meme on and match the best caption with the chosen picture, in this hilarious and sometimes risque, adult party game! Welcome to What Do You Meme? UK Edition.

Within the sturdy box you will find 360 Caption Cards, some of which are sealed and carry a Super Mature Content Warning on them. This is helpful to know, that the offensive adult content of the game has been separated allowing players to choose whether to play with these cards or not.

There are also 75 large Photo Cards, a cardboard Easel and a very light and humorous rulebook.

All you need do in this three to 20-player game (designed by Elie Ballas, Ben Kaplan and Elliot Tebele) is draw seven Caption Cards and chose who’s going first. The rules suggest that the person with the most Instagram followers takes on the mantle of the first Judge. Their responsibility is to find a Picture Card that they like and then show everyone it, by placing it on the Easel.

Everyone else now picks from their seven cards the best fitting caption they believe the Judge will like, and places it face-down in front of said judge.

When all have completed this task, the Judge shuffles the cards and reads them aloud, (insert laughter or sighs). When the favourite is chosen by the Judge the picture card is awarded to the player who’s Caption Card it was.

Everyone draws cards back up to seven and the player to the left of the Judge becomes the new judge. Play continues like this until an agreed finishing point, and the player with the most Picture Cards at the end is crowned the winner of What Do You Meme?

Bonus Rules include; if someone plays a Freestyle Card, ALL players have to make up a caption on the spot for that round, either writing it down or presenting it verbally. Or, if all your Caption Cards suck then you can exchange one of your priced Picture Cards for a new hand of seven Caption Cards.

Final Thoughts on What Do You Meme? UK Edition

I love a good party game and with the right type of people this is one of those! This UK Edition is better than the original What Do You Meme? game as you obviously aren’t left trying to figure out Americanisms that don’t translate and there are the odd UK Photo Card that you know will always bring a laugh to the table whatever Caption Card comes out.

I liked the Freestyle cards although it can be irritating if you’ve laid down a corker of a card that you’ve been saving only to have it wasted. Plus, I liked the idea of swapping your hand when get gets clutter with crap cards but for the cost of a precious victory point. - I think I’ll “house rule” this into other similar party games I play.

The quality of the box and cards is good, although I’m not sure how long the easel will last if constantly used - but hey, it’s no deal breaker as it isn’t really a necessity.

The replay-ability is there as the game has plenty of cards, both caption and photograph, and I like the recommendation in the rules to add your own pics into the mix. That is as long as you’re not going to lose friends when people play certain risqué or offensive captions to fit alongside your beaming mugshot and delightful family photos!

If you like Cards Against Humanity, Joking Hazard or Bucket of Doom, you are bound to enjoy What Do You Meme? So, get it ordered and invite round your mates an evening of laughs-a-plenty!