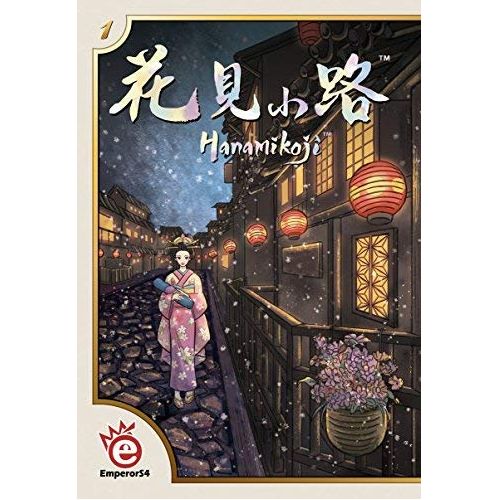 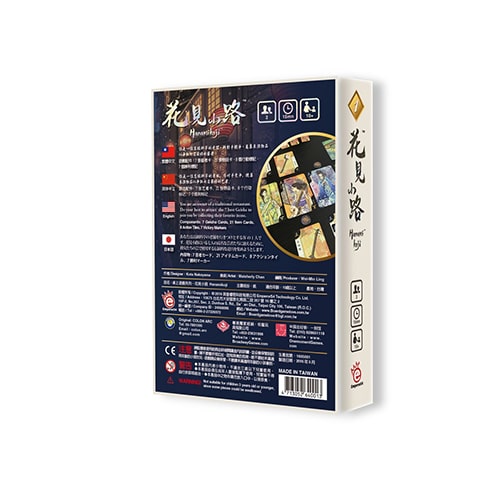 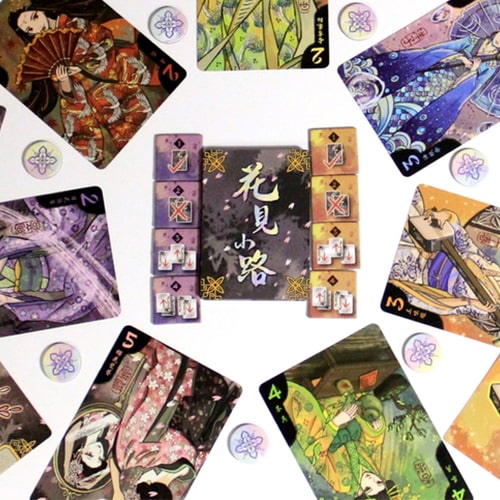 you could earn 1592 victory points

you could earn 1592 victory points

Add to Wishlist
Welcome to the most well-known geisha street in the old capital, Hanamikoji. Geisha — the graceful women elegantly mastering in art, music, dance, and a variety of artistic performances after years of training — are greatly respected and adored. Geisha may be translated to “artist” and they dance, sing and entertain everyone. In Hanamikoji, two players compete to ear…
Read More
Category Board Games Tags Best Sellers, EmperorS4, Hanamikoji, Stocking Fillers, Stunning Artwork SKU ZBG-EMPHAN01 Availability 5+ in stock
Share this
93%

Welcome to the most well-known geisha street in the old capital, Hanamikoji. Geisha — the graceful women elegantly mastering in art, music, dance, and a variety of artistic performances after years of training — are greatly respected and adored. Geisha may be translated to "artist" and they dance, sing and entertain everyone.

In Hanamikoji, two players compete to earn the favors of the seven geisha masters by collecting the performance items with which they excel. With careful speculation and sometimes a few bold moves, you may earn the essential items by giving away the less critical ones. Can you outsmart your opponent and win the most favors of the geisha?

Two-player games are a painful experience for me, but in a good way if that makes sense. I can never get them to the table as often as I would like as I live alone, but I enjoy playing them all the time! Getting wailed on in multiplayer can be seen as punishing and unfair at times, but with a two-player game, it's your job to wail on the opponent, it's a duel after all!

There are a ton of these games that I want to try out but never had the chance to, so I'm always keen to try and review these little gems from time to time. In my reviewing days, I've been fortunate enough to come across Targi, Onitama and YINSH in the hidden gems pile, but there's always room for more.

Hanamikoji only came to my attention through Sam Healey, who began to rave about this game on the Dice Tower. Now I trust all the Dice Tower trio opinions. . . . except when they're wrong, but I digress, and so if one game is being praised from the mountain tops on multiple occasions I have to at least check it out.

Holding the box in my hands after acquiring it I can tell it's small, portable, cheap and looks very pretty. Good start so far.

Hanamikoji is a "near"-microgame of which the goal is to successfully draw the attention of Japanese Geisha, the fair maidens regailed in Japan who specialise in various forms of art and culture.

You accomplish this by either having favour over four of the seven available Geisha cards, or 11 charm points worth of Geisha (they range in value from 2 - 5).

To achieve this you are acquiring item cards that correspond to a certain Geisha and trying to obtain a majority holding in order to win favour. I don't normally explain rules in detail but given this game is so deceptively simple, I think we can change things up a bit here.

Hanamikoji is split into rounds where each player will get four actions that each use one or more of their item cards. There are 21 item cards, each depicting an item corresponding to a certain geisha. They appear in an amount equal to the geisha's value, e.g. five cards for the five-point Geisha. One card is removed from the deck at random at the start of a round and six cards are dealt to each player. 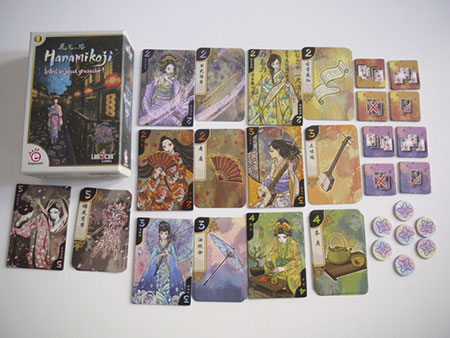 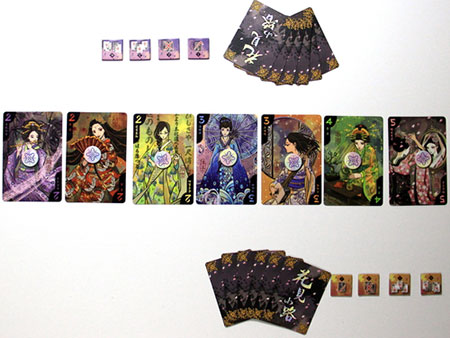 At the start of each turn, a player will draw one card from the deck and then choose one action that he has not already chosen.

1. Secret - Place one card facedown in front of you. This card will be scored at the end of the round.

2. Trade-off - Place two cards facedown in front of you. These cards will no longer be used in this round.

3. Gift - Place three cards faceup in front of you. Your opponent chooses one to score, and you score the other two.

4. Competition - Place two sets of two cards face-up in front of you. Your opponent chooses one set to score and you score the other.

By the time the last action occurs, the deck will be empty. The players then score (place the card next to the relevant geisha) their Secret cards and evaluate the status of each geisha. Whoever has the majority of cards on a geisha earns favour with that geisha, causing the marker on that geisha to switch over to them. If there is a tie, the marker doesn't move.

If any player has achieved one of the two winning conditions, that's the game over with. Otherwise, you play an additional round leaving the markers where they are and evaluate again afterward. You will continue on until the game is eventually won (typically within 1-3 rounds).

As much as it is obvious how gorgeous Hanamikoji looks, don't be fooled by the beautiful art or the engrossing theme - this game is an abstract, pure and simple. However, it's never a bad thing when abstract games actually make an effort to make themselves look appealing to the eye.

Like all good abstracts, the game can be taught in less than five minutes and then it surprises you instantly by how tense the decision making is and the tactical depth it provides. You've only got to teach the goal of the game and four actions - job done.

At first, the small number of actions seemed limiting, but the limited actions are a weapon to attack your opponent. You're going to be giving away three of your cards every round so you want your opponent to pick the ones that won't benefit them and you'll use your knowledge of the cards you've seen and the board state to try and influence them to pick the lesser card. Hanamikoji gives you that nice agonising feeling with each decision as you try and outsmart and bluff your opponent.

In addition, I love how even the choice of what order to play the actions in is important. It’s easy to leave the discard action only to find sometimes you have a card left you wanted to play but then you have to discard it. So next round you leave the scoring action until last, only to find you've literally drawn off the top of the deck and hope it's useful. OK, scratch that I'll bide my time with the Competition action - oh wait, now I only have my last four cards to pick my pairs from and the current board state means the opponent benefits more than I do. You'll make a decision earlier in the round, but you won't know until later on whether that decision was a good one or not. These actions are so well designed to frustrate you it's unreal. 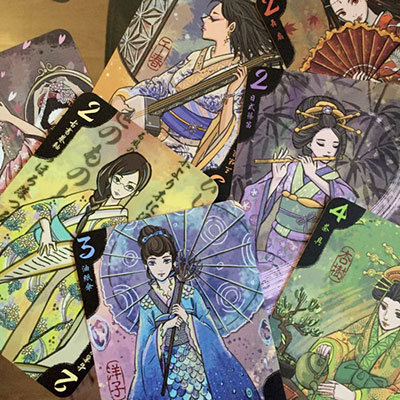 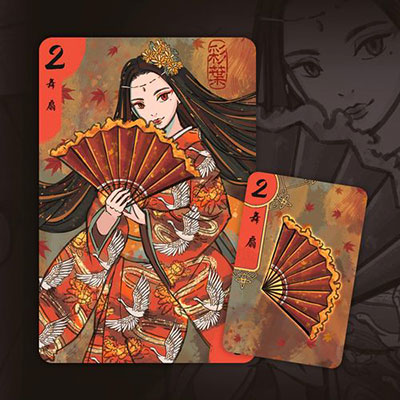 Assuming you go on to play another round, this is a critical point. The markers start in a neutral position, but after they are moved once, they remain where they are. This now changes everything because it's no longer enough to simply tie on a Geisha that already belongs to the opponent, you have to win it outright.

Similarly, if you already have favour with a Geisha, you can play it a little safer and allow ties to happen. I for one tend to focus on the lower "2" value Geishas a lot because once they are on your side, you've potentially got a lot of power to keep hold of them in future rounds. Of course, you can't just let your opponent make merry with the "4" and "5" because 11 charm points aren't exactly hard to achieve after that.

Tense and thinky, yet small, cost-effective and simple - Hanamikoji does exactly what a perfect two-player game needs to do and it accomplishes that with very few components, yet some gorgeous artwork. Yes, it's an abstract game, but the looks and character help propel this beyond other stark alternatives.

Within five minutes you're stuck into a game and within 15-20 minutes max you're done and guaranteed to get a response saying "let's play that again, I get what's going on now" - only to then hear those gears grinding in their head as they yet again encounter the same tense decisions as before.

I played this after I did my Top 100, but it featured at #2 on a recent Top Ten Two-Player Games list I did on my YouTube channel, just a smidgen under 7 Wonders Duel. But constantly I'm rocking to and fro as to which one I prefer and if I was I to go purely from a point of accessibility and simplicity vs depth, this game would take the trophy.

Even if this publisher doesn't make any other games I like, I'd still praise them for this. Whatever word you consider a higher ranking out of "amazing", "excellent" or "fantastic", plug it in here and always use it, because hands down Hanamikoji deserves it.