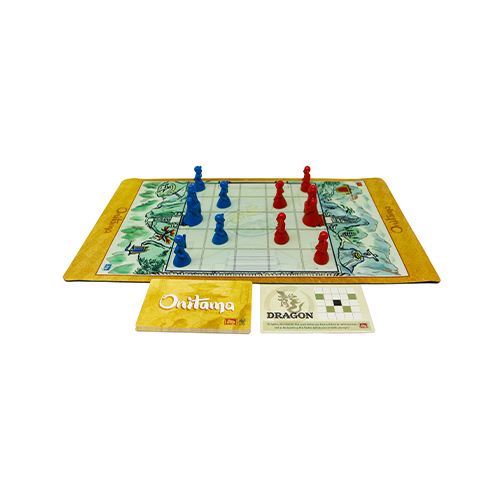 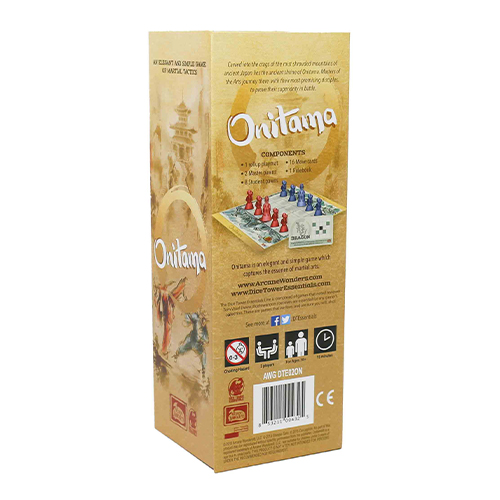 Onitama is an elegant head-to-head game. published by Arcane Wonders. that you can learn in a couple of minutes. Through well-designed, abstract gameplay, players will quickly be able to start matching wits and enjoy its deep strategy. Fans of chess will undoubtedly appreciate the similarities between the two, but Onitama is a quicker, simpler game that will never end in a stalemate…
Read More
Category Board Games Tags Arcane Wonders, Best Sellers, Great For Two, Onitama, Value For Money, Zatu Platinum Award SKU ZBG-AWGDTE020N Availability 3+ in stock
Share
Share this
90%

Onitama is an elegant head-to-head game. published by Arcane Wonders. that you can learn in a couple of minutes. Through well-designed, abstract gameplay, players will quickly be able to start matching wits and enjoy its deep strategy. Fans of chess will undoubtedly appreciate the similarities between the two, but Onitama is a quicker, simpler game that will never end in a stalemate.

Onitama plays out in its entirety on a shared 5x5 board, with each player controlling four wooden pawns and one king. The objective of the game is to either remove your opponent’s king from the board or to move your king on to their king’s starting spot. Onitama is, therefore, not only a matter of attrition between two warring sides but also a game of clever movement and foresight.

The game’s standout feature is its card-driven movement. At the start of the game, each player will be dealt three movement cards that they leave face-up in front of them. Each turn, they choose one of these cards and carry out its movement with any one of their available pieces. The card then goes to their opponent and will remain in their possession until they use it.

In this way, there are only ever a handful of possible moves available and you can always see the options available to your opponent. This clever feature of Onitama’s design means that it never gets old. You can never ‘solve’ the game. As long as you have a human to play against who is capable of changing their behaviour, there will be life in this game for you to draw out and enjoy.

The simplicity of Onitama is such that you can teach it to anyone, including children who are old enough to grasp a set of rules. It is a very visual game with no language involved, making it tremendously accessible. There are very few abstract games out there that could give two people a more compelling head to head experience than Onitama.

At first glance, you might consider Onitama to be Chess for simpletons. There are fewer pieces, a smaller play area and simple rules. But as easy and quick as it is to learn, beneath the surface lies a game which is not just beautiful in looks and simplicity, but one that also has a hidden depth which belies its size.

I am a sucker for a nice game-box, and Onitama has a beautiful box. Themed around the mythical Shrine of Onitama, where students learn to become masters of Martial Arts, the box is decorated in the muted colours and style of traditional Japanese paintings.

The shape, similar to a presentation box for a bottle of port or whisky, means it won’t slot easily onto a shelf with other, more traditionally packaged games. But who cares when it is as lovely as this? It has a magnetic clasp to keep it securely closed, and the outer layer unwraps to reveal the secrets within.

Inside are more things of beauty; a neoprene play mat; two sets of pawns, in blue and red – one Master and four students each; a set of 16 cards, and a very thin rule book.

Set the play mat between players. It is a 5 x 5 grid where the centre-square closest to each player is decorated with a Temple Arch. Place the Master Pawn on the Temple Arch, and the remaining pawns on the other squares in the back row.

The aim of the game is to capture your opponent’s Master or take possession of their Temple Arch. Easy! But therein lies the interesting/clever/frustrating beauty of the game. Unlike chess, none of the pawns have a prescribed way of moving. The deck of 16 cards drives this part of the game.

Shuffle the cards, draw two cards each and lay them face up in front of you. Then draw a fifth card and place it to the side of the play-mat.

Beautifully illustrated and featuring calligraphic representations of various creatures including the Dragon, Rabbit, Cobra, and Crab, each card offers a different and specific way to move your pawns.

The cards show one square highlighted in black. This represents the square occupied by any given pawn. Around this square, a number of other highlighted squares show where the chosen pawn can move, relative to its current position. You can move any one of your pawns to any of the highlighted squares from your current square. The move can take your pawn forwards, sideways, and even backwards.

And now for the clever part:

The active player decides which card they want to use to affect a move, and with which pawn. After moving, they swap that card with the card sitting in the middle of the table. This means that the card just played will go to your opponent after they play and move next time. So not only do you need to consider your next move, you also need to think about the card you will be making available to your opponent for a future turn. And of course what you might get in return next time.

For players who suffer from Analysis Paralysis, this can cause their brains to implode. Choices are limited, each one is important, and they are all there on the table for both players to see! Sometimes you know what's coming, you know it is bad (or good!), and you just hope your opponent has missed it.

A move results in either occupying an empty square or landing on a square occupied by an opponent's pawn, which is then removed from the game. Play alternates until the Master is captured or you fashion a way to land on your opponent's Temple Arch.

For such a small and simple game Onitama offers a deep and satisfying playing experience. Games range from two minutes to 20 minutes. Arguably everything is subject to the vagaries of the random draw of cards, but this is part of the appeal. Each game presents both players with the same new possibilities, where the cards you hold but have to give away are as dangerous to you as they are to your opponent.

Game time might suggest this is just a filler, but if you channel your Chi and the power of the Cobra it is so, so much more than that.

Onitama is a chess-like, abstract strategy game for two players. In the game, two masters of martial arts are battling it out, with the help of their apprentices, against an opposing school. Players are trying to win to prove they have the best martial arts school in the land.

So far sounds good, but how do you play?

Place the game mat on the table between the players. The players choose which colour to play as and take all the pieces of their colour. If necessary turn the mat round so the correct coloured side is facing the correct player.

Each player places their Master on the square marked with their colour in the row closest to them. The Students are set out on the four other squares of that row, two each side of the Master. In this guide i will use the term “Pawn” to refer to either a Master or a Student piece/

Shuffle the 16 move cards then remove five cards from the deck. These are the cards which will be used this game. Give two cards to each player. These are the player's hand and are placed face up in front of the player. The player whose pawns are the same colour as the stamp on the lower right hand corner of the card will go first. The remaining card should be placed alongside the board facing towards the starting player.

In Onitama, play alternates between the players. Each player’s turn consists of two steps - move and attack and the exchange of cards..

Each of the Move cards in Onitama sets out ways a pawn can move. There are several movement options on each card. The black square on the card represents the space your pawn is starting from. The squares marked in a different colour show where the pawn can move to.

On your turn you choose one of the two move cards in front of you and move one of your pawns in the way shown on the card. You then pick which pawn you wanted to move, and move it as indicated. Other pawns do not block movement but you cannot land on the same space as one of your own pawns. You also cannot make a move which would lead to your pawn moving off of the squares set out on the play mat.

If your pawn lands a space occupied by one of your opponent’s pawns, your pawn would “capture” this piece. A pawn which is captured is removed from the game.

Readying For the Next Attack

The player takes the Move card they have just used and places it to the left side of the play mat, rotating it so it is facing their opponent. They then take the card on the right side of the playmat and add it to their hand. This card can be used next turn.

Look at your opponent’s cards. Remember, your opponent can only carry out the moves on the two cards in front of him after your turn. You can see these cards as they are face up on the table. This can help you plan your move, either by looking at spaces your pieces can safely move to, or for setting up an attack.

Moving your piece and passing the card on are equally important functions for the card. Make sure you don’t use a card to move a pawn which will then gift the card to the opponent. Likewise you can be clever when handing cards on. For example, if a player has only blue cards in front of them it is harder for them to move to the right of the board, potentially giving you a path to victory.

There is no harm in retreating. Many cards give players the option to move backwards as well as forwards. Part of the balance of Onitama is knowing when to go on the attack and when to retreat a pawn, readying yourself for the next turn.

Remember there are two ways to win.