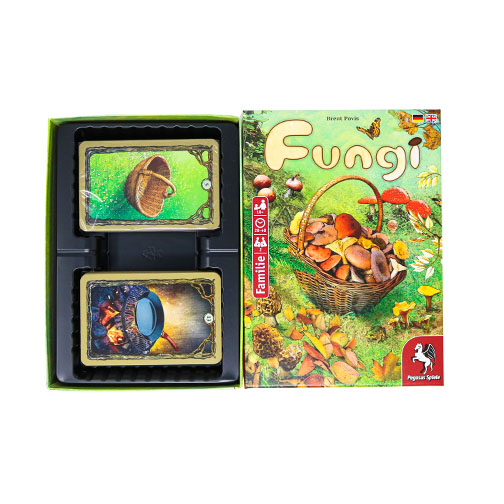 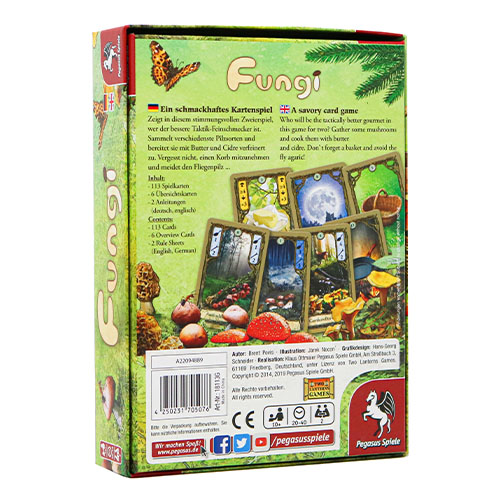 If you fancy a beautiful and strategic mushroom foraging trip, Pegasus Press’ Fungi may right up your woodland path. In this neat card game two players compete to collect and cook the most rare and delicious mushrooms they can as they move along a pathway of forest cards representing the route they’re strolling through the wood. Fungi offers a range of different species of mushr…
Read More
Category Board Games Tags 9-11 Years, Best Sellers, Great For Two, New Releases, Pegasus Spiele, Podcast Approved, Zatu Gold Award SKU ZBG-PEG18113G Availability 3+ in stock
Share
Share this
86%

If you fancy a beautiful and strategic mushroom foraging trip, Pegasus Press’ Fungi may right up your woodland path. In this neat card game two players compete to collect and cook the most rare and delicious mushrooms they can as they move along a pathway of forest cards representing the route they’re strolling through the wood.

Fungi offers a range of different species of mushroom to come across and collect on your jaunt, each type with its own rarity-dependent flavour and sale values. Collect three or more of any one type and cook them in a pan to score flavour points, or exchange two more more of a kind for sticks. These allow foraging beyond what is directly in front and available to you; vital if you’re going to get those rare and tasty mushrooms before your opponent!

Along your journey you might well find some butter or cidre to spice up your meal and cook yourself up some more points; or a chance to pick from the night deck of mushrooms that have grown larger and tastier in the night and are worth double flavour or trade points. You may also find more pans to cook in and baskets in which to carry more than your current hand size allows. Just make sure you avoid the dangerous Fly agaric; this poisonous mushroom will reduce your hand size as you focus on recovering from your ailment.

Fungi is a delightful set collection game of tasty decisions. How long do you push your luck and wait before you cook your mushrooms? Do you choose to cook them all or do you trade some of lesser value in for sticks? What is your opponent collecting? Do you want to block them? Do you take what’s right in front of you or spend sticks to get something more interesting further up the path? With the forest disappearing into decay behind you as you pass, you only have a limited time to run back and pick things up before they are gone for good!

With sweet artwork, head-to-head competition and plenty of choices, Fungi is great fun for even the most mushroom-averse players!

Fungi, the brain-child of Brent Povis, is a two-player card-based game that revolves around collecting and cooking an array of mushrooms to prosper on a dusky evening in the woods. The play time is between 20 and 40 minutes and while the rules may initially seem a little boggy, this game will soon become a great pick-up-and-go addition to any collection.

The box, which is understated, contains 86 Forest Cards (offering a variety of mushrooms, pans, baskets, flavour enhancers and moons), eight Night Cards (mushrooms worth double the points but only accessible in exchange for a moon card), 18 Sticks, a pair of shoes and six Overview Cards.

The goal of Fungi is fairly simple: collect and cook mushrooms. To win? Simply have the most flavour points from the creations you’ve cooked.

Each player will start the game with a pan and three other randomly dealt forest cards. A “forest” will also be dealt, which is eight randomly dealt cards from the forest pile, that runs horizontally across your playing surface. The shoes will be placed below the two cards furthest from the draw pile, which is made up of the remaining forest cards.

From here, each player has a choice of five actions but may only take one per turn. The forest is the centre of play, with cards being collected from the pair of shoes for no cost or collected from deeper recesses in exchange for sticks. The forest floor “evolves” with every turn, with a card entering the “decay” pile once per turn – this effectively acts as the forests reduced section, offering you the chance to pick up more than one card, but it’s only available when there are four or less cards in it.

Once there are four, it’s written off as inedible goods and the cards are returned to the discard pile. Each player is initially limited to a hand-limit of eight cards, and while this can be added to over time with baskets, it makes foraging for resources slightly trickier than it first appears.

Once the draw pile is emptied and the forest floor depleted, each player tallies up their points and the one with the highest amount wins.

Fungi is a brilliantly creative game – its elements are very simple but beautifully illustrated, with each card having enough individuality and character to make it identifiable without needing to know the name of each mushroom.  The components are also made to a very high standard and once it’s been unpacked, Fungi fits back into the same box that you took it out of which seems to be becoming a far-out idea.

The game itself is very enjoyable and can be played as tactically as you wish. Myself? I like to try and collect odd cards to spite my opponent, but with a strict hand limit this can be risky. The difficulty is balancing collecting mushrooms and resources such as pans, baskets etc - as one without the other simply won’t win the game. For me though, the beauty of Fungi really is in its simplicity. An easy go-to on a cold, Tuesday night, its theme is strong enough to transport me to a roaring camp-fire with the smell of buttery mushrooms lifting in the air.

That’s not to say there are no niggles with the gameplay – the constant movement of the forest can be a little annoying. While essential to the game, it can detract from it’s fast-paced nature and can be a distraction when trying to focus on other things. The ending to the game is also very abrupt – when the last card from the forest is taken, the game is automatically over. If this is the card you’ve waited all game for, it’s incredibly frustrating to be able to collect it but not be able to play it. This might suit some peoples style of play as it can be quite cut-throat, but if not can easily be adapted to create a house-rule that might suit you better.

Overall though, Fungi is a solid card-based game. It’s fast-paced, it’s imaginative and it offers a slightly different dimension to your collection. If you like games like Jaipur or Love Letter, this is worth investing in. Oh, and don’t fear if you’re one of life’s mushroom haters, no actual fungi is used in the making of the game.