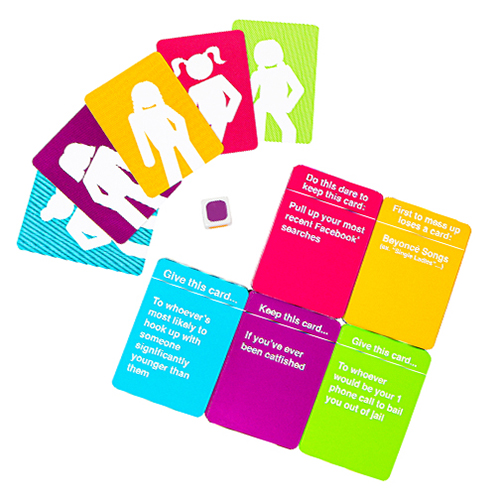 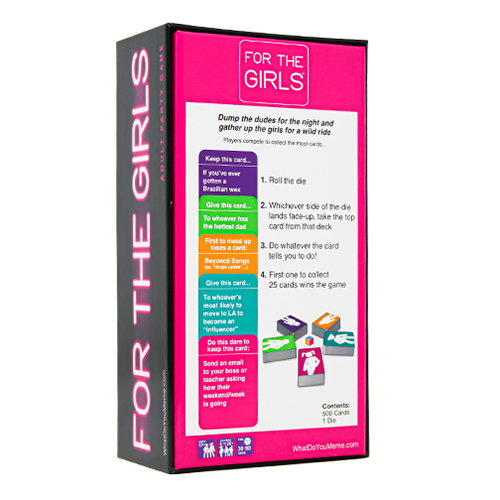 Get the girls together for a night of hilarity with For The Girls! From the creators of ‘What Do You Meme?’ For The Girls is the ultimate adult party game for birthday parties, hen parties, girls nights in or out, pre-drinks and so many more. This party game brings you all of the joy of a round of truth or dare at a sleepover but elevated for a much messier (but hilarious) outco…
Read More
Category Board Games Tags Best Sellers, For the Girls, Girls Night In, NSFW, Pick Up and Play, Top 20 Party Games, Value For Money, Zatu Platinum Award SKU ZVR-5988 Availability 3+ in stock
Share
Share this
92%

Get the girls together for a night of hilarity with For The Girls! From the creators of ‘What Do You Meme?’ For The Girls is the ultimate adult party game for birthday parties, hen parties, girls nights in or out, pre-drinks and so many more. This party game brings you all of the joy of a round of truth or dare at a sleepover but elevated for a much messier (but hilarious) outcome. Whoever has the most Instagram followers will be the first to roll the dice and find out what awaits them in this colourful deck. Read your card aloud to the group and perform whatever action is on the card, without hesitation! From dares to embarrassing truths, For The Girls will have you crying with laughter. Contents: 100x ‘I Have Never’ Cards 100x ‘Rapid Fire’ Cards 100x ‘Best of the Best’ Cards 100x ‘ Most Likely’ Cards 1x Cubed and Colourful Dice 1x Rule Book Recommended for ages 17 and up. Containing mature language and references, this is NOT intended for children.

Age restriction: Please note this game is for adults only and only recommended for 17+

Got a girl's night in coming up? Maybe a birthday party or a bachelorette party? Look no further than For the Girls, an adult party game that will have you rolling around with laughter if you let it! Think What Do You Meme? but messier in the best possible way.

A slight disclaimer for you here, I played this on my birthday with a group of 4 and wine! We rolled up our sleeves and let our guards down and really enjoyed this one! It did take a couple of rounds to settle into the game but once we were comfortable enough, we had a blast.

This game is super simple and really is a pick up and play kind of game. Similarly, the set-up for this game is practically non-existent. Let's dive into the review - you'll notice that all of the sub-headings here are going to be Britney Spears songs... you'll soon see why!

For the Girls is great for any occasion partially because of it's easy set-up. The game comes with 500 cards, 100 of each type, and a coloured die. They are of a high quality yet very simple.

All you'll need to do is shuffle each coloured deck separately and place them in the centre. Make sure everyone can reach and that drinks won't be knocked over!

Having so many cards really is a blessing for this game! As we played in a group of four, we could go back and replay this game over and over as it feels like we barely got through the decks. That and due to the nature of this game, it really is created for replayability as it really depends on the player that draws each card.

Oops! I Did it Again

The only other thing you will need for this game is your phone. Make sure that it is fully charged as you will probably be spending a lot of time on it scrolling through each other's social media. This is both a good thing and a bad thing in all honesty.

If someone has pulled the 'Take a picture of yourself and use Facetune to distort your body and Instagram it with the caption ALL NATURAL!' dare card, the rest of the group do end up sitting around waiting. At first this is fine and in some settings I'm sure it wouldn't be a problem, but it can start to become a little tedious as the rest of the game is more quickfire. We played as a four and if one person was doing this, we would either have a drink or we would get distracted by something.

The recommended player count for this one is from 3 to 20 or more Grab as many gal pals as you want and your fully charged phones, then get stuck in!

Instagram is your best friend and worst enemy in this game and even dictates the start of the game. The player that has the most Instagram followers goes first, rolling the colourful die to kick off an eventful night.

Players will take turns in rolling the die and picking up the corresponding card until someone collects 25 cards or your taxi arrives. The die matches one of the five decks of cards but also has a wild side, the black side. If it lands black, then you can choose whichever category that you want. This mechanic can save the game from getting repetitive as the dare cards are arguably the best cards to draw as they get everyone involved in some messy fun.

The girl with the most cards wins! And somewhat lose depending on what you had to do to get them.

The most important part of this game are the 500 cards at your disposal. They unleash that competitive streak in you as well as a somewhat petty, salty side. After all, the player with the most cards wins.

The most intriguing deck of cards is that of the pink dare cards. If you pull one of these, you must immediately perform whatever dare is on the card. It might get you to come up with a ridiculous conspiracy theory and tweet it to all of your followers. Or maybe it will allow every other player in the game roast you for 30 seconds. We were up and moving for some cards, making Tik-Toks or throwing on as many items of clothing as possible. As I have hinted at, most had us sitting with our phones on Instagram, Facebook and Twitter.

Next up is the purple deck. If you have done the thing on the card, then you keep it. You have to read it aloud and you can expect to be interrogated for an explanation. If you haven't done it, you must admit that to the group and pop the card at the bottom of the pile. You'll be able to hold onto your cards if you have ever been hacked on social media or clogged a toilet and left.

The orange cards are also a highlight for me. The card will list a category, such as Britney Spears songs, and you must go around the group naming as many things as you can. The first player to hesitate for more than 10 seconds, repeat an answer, or mess up loses the round and one of their cards. You'll be listing everything from salad dressings and female rappers to pasta shapes and Lindsey Lohan movies.

The green cards go to the player you think it best describes. If you pull the ' whoever has the funniest laugh' card, you can give it to your one friend that sounds like a hyena on helium or the nose laugher and squeaker.

Finally, we have the blue deck. It is rather similar to the green deck and I often got the two confused! The aim with this deck is to give the card to whichever player would totally do that thing. Is Jasmine totally going have 10 kids or is Rosie most likely to never wear a bra again!

For the Girls is a whole lot of fun!

I stand by the fact that you need to let your guard down! This game is only at it's best when you fully let yourself go and just enjoy it. We decided to just play a few rounds of the orange deck to begin with, just to loosen ourselves up - it worked wonders.

My only major note about this game is how American it is. It depends on a lot of American pop culture and terms! It isn't too much of a problem but can make things a little confusing. In the same breath, you rely on your phone and social media completely. A combination of the two is that of the dependence on the app Venmo - we ended up skipping these!

It's a must for a girls night in!