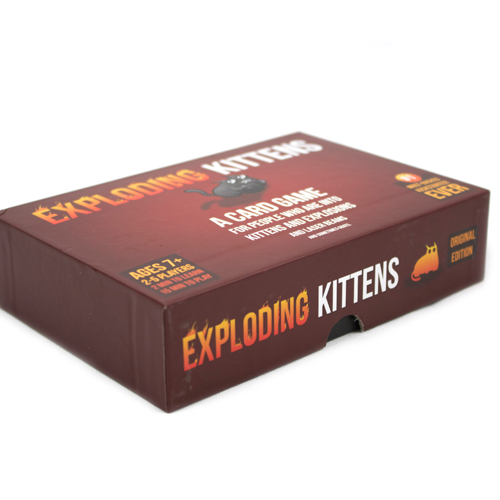 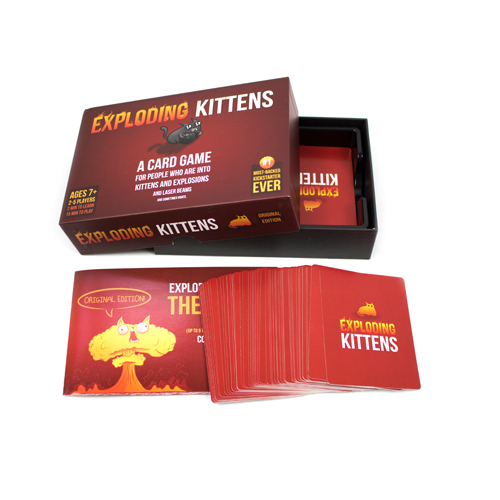 Exploding Kittens is a hilarious and highly strategic kitty-powered version of Russian Roulette. Players take turns drawing cards from the deck until someone draws an exploding kitten, at which point they explode, they are dead, and they are out of the game – unless that player has a Defuse card, which can defuse the kitten using things like laser pointers, belly rubs, and cat…
Read More
Category Board Games Tags Best Sellers, Elan Lee, Exploding Kittens, Fun for Kids, Matthew Inman, Podcast Approved, Shane Small, Top 20 Party Games SKU ZBG-EKGORG1 Availability 3+ in stock
Share
Share this
80%

Exploding Kittens is a hilarious and highly strategic kitty-powered version of Russian Roulette. Players take turns drawing cards from the deck until someone draws an exploding kitten, at which point they explode, they are dead, and they are out of the game - unless that player has a Defuse card, which can defuse the kitten using things like laser pointers, belly rubs, and catnip sandwiches. The deck is made up of cards that help you to try and avoid exploding by peeking at cards before you draw, forcing your opponent to draw multiple cards, or shuffling the deck. The game gets more and more intense with each card you draw because fewer cards left in the deck means a greater chance of drawing the kitten and exploding in a fiery ball of feline hyperbole. If you're into card games or laser beams or weaponized enchiladas, this is the game for you.

Matthew Inman’s Exploding Kittens launched onto the Kickstarter scene in 2015 to a thunderous response, quickly becoming one of the most funded Kickstarter games ever with almost nine million dollars received from backers.

Fans of The Oatmeal comic series were eager to see a game that wedded Inman’s art style and humour with the work of game developers Elan Lee and Shane Small. Yet now that we are past the games explosive launch - the mushroom clouds have blown away, the remains of innumerable kittens have been swept up by disturbed sanitation workers - it’s time to ask whether the game lives up to the hype it promised.

So, what is Exploding Kittens?

Exploding Kittens describes itself as “a kitty powered version of Russian roulette,” and it’s just that. The game is about avoiding the exploding kitten card at all costs, because drawing it means that the game is over – and you have lost. Since the exploding kitten functions as a ticking time-bomb hidden in the deck, the game becomes about tricking your fellow players into risky moves whilst avoiding having to draw cards yourself.

Action cards help you out with this paranoid game of pass-the-buck, allowing moves like peeking at the top of the draw deck to see if an exploding kitten is close, or forcing another player to take multiple turns and draw more cards. Of course, other cards defend against player manipulation, with skip turn actions and ‘Nope’ cards which entirely reject any action another player might be forcing upon you. This is where the real game takes place, and if you’re playing with friends willing to give the game some focus then you’ll find yourself happily occupied with the job of screwing over your friends whilst keeping yourself out of danger.

However, this does mean that less willing players can dampen the game for the whole group if they’re not ready to pay close attention. For example you can use a ‘Nope’ card not only to stop actions being forced on you, but also to stop other players doing something beneficial for themselves like shuffling the deck.

Because it doesn’t have to be your turn to play a ‘Nope’ card you need to constantly be on the ball and planning your moves ahead, both for attacking players and defending yourself. For this reason Exploding Kittens feels like an excellent game for experienced gamers ready to take it seriously and aggressively outmanoeuvre their friends, but players may have a harder time making the game interesting if your group are only half-invested in what’s going on.

That said, while it’s definitely the case that the game demands focus to make it entertaining, seasoned board gamers can appreciate that this is a game made for them. The game removes the dreaded need to tell the next player ‘Er… it’s your turn’ and instead pummels you with fast-paced gameplay you will be expected to follow, or be blown to smithereens.

We can’t talk about Exploding Kittens without mentioning that, along with games like Penny Arcade: Gamers vs Evil, many people were first drawn to the game through their love of the comic series. Matthew Inman’s The Oatmeal comics are a well-beloved series for their outrageous humour tempered with the common sense and sane advice of your great-grandad.

Exploding Kittens is absolutely true to form in terms of The Oatmeal’s brand of silliness, with clear thought gone into the lovingly designed cards, box, and even rules set which is laid out like one of Inman’s comics.

Thanks to Kickstarter funding the game comes in two editions: the base game of Exploding Kittens, and the NSFW Edition. Whilst identical in terms of gameplay I would suggest that the Not-Safe-For-Work edition is the better buy for fans of The Oatmeal who fully embrace its toilet-humour with cards revolving around rubber dick collections, penis balloons, and baby owls smoking crack.

The standard Exploding Kittens version is, of course, far more family friendly, whilst still incorporating Inman’s brilliant art style and a more subtle brand of deviousness. While the joke might wear-thin for some, Inman’s art is really what livens up Exploding Kittens and fills it with charmingly stupid and silly cards which play into the atmosphere of jokingly messing up all your friends’ plans.

Overall, Exploding Kittens delivers well to the audience it was made for. To experienced gamers and fans of The Oatmeal this game is a quick-fire way to mess with your friends, flex your meta-game muscles, and enjoy the silliness of a theme and art style built around stupid fun.

Exploding Kittens is ultimately successful because whilst it’ll have you giving serious attention to its rapid gameplay, in style and humour the game knows not to take itself too seriously.