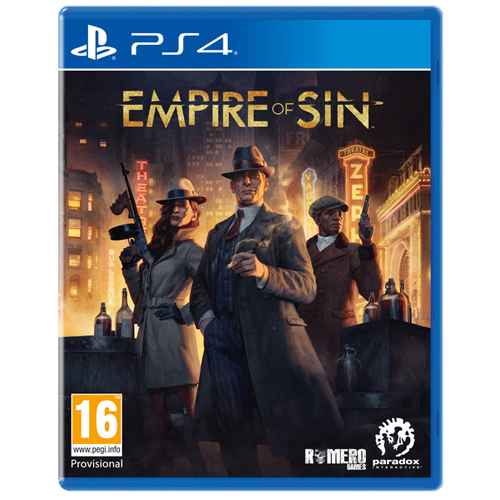 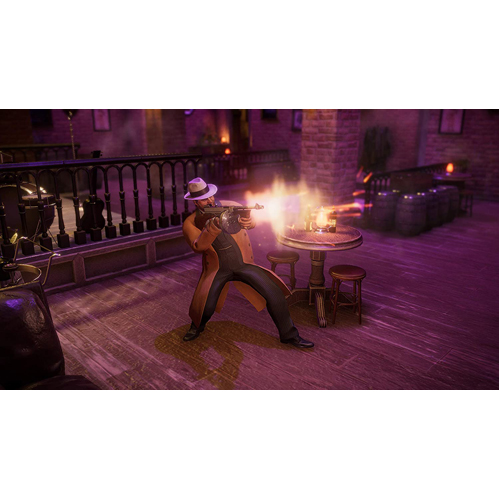 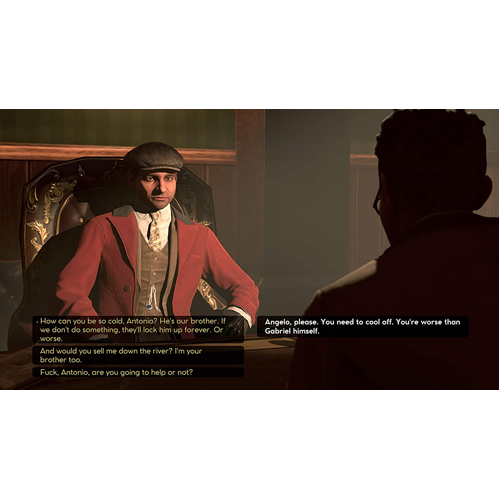 Empire of Sin, the strategy game from Romero Games and Paradox Interactive, puts you at the heart of the ruthless criminal underworld of 1920s Prohibition-era Chicago. It’s up to you to hustle, charm and intimidate your way to the top of the pile and do whatever it takes to stay there. This character-driven game puts players smack dab in the glitz and glamor of roaring 20s all whi…
Read More
Category Video Games Tags Empire of Sin Video Games, Paradox Interactive, PS4, Sale, Software, Strategy Video Games SKU VKM-PARA09.UK.22ST Availability 2 in stock
Share
Share this
68%

Empire of Sin, the strategy game from Romero Games and Paradox Interactive, puts you at the heart of the ruthless criminal underworld of 1920s Prohibition-era Chicago. It’s up to you to hustle, charm and intimidate your way to the top of the pile and do whatever it takes to stay there. This character-driven game puts players smack dab in the glitz and glamor of roaring 20s all while having them work behind the scenes in the gritty underbelly of organized crime.

Empire of Sin, developed by Romero Games, will have you exploiting Chicago as 1 of 14 playable mob bosses. Against the backdrop of prohibition, players will build an empire of speakeasies, casinos, brothels, and breweries. Along the way, you'll hire thugs, organise sit-downs, and bribe the police. This gangster sim has it all - city management, XCOM combat, and roleplaying. So, grab a fedora. It's time to become top dog.

In Empire of Sin, you have 14 mobsters to choose from, including household names like Al Capone and O'Banion. Each boss comes with unique skills, talents, and stories. Choosing a boss was difficult. I wasn't sure which gangster was best but settled with Daniel McKee Jackson. As it turned out, he was a brilliant choice; he's an all-rounder and his special move, Last Rites, is seriously overpowered. But each boss has their own pros and cons, which adds to replayability.

Once you've picked your kingpin and jumped into the game you get to hire underlings. There are 56 thugs to choose from. Each has their own class, back story, and array of talents. You can hire up to 10 at a time but as they can die for good you will end up replacing them. I learnt this the hard way and was devastated when I lost a thug in my first showdown. RIP Bau Chai-Ung. Consequently, after her death, I could no longer hire her lover. Seems he wasn't too keen on my health and safety practices.

Interactions between thugs is a highlight for sure. As the game went on my thugs entered romantic relationships with one another. One of my thugs, Norah Quinn, took it upon herself to cure every alcoholic I hired! These small details fleshed out the world and made me feel connected to my criminal team. When a rival boss tried to hire my thug, Vincenzo, I felt great pride when he turned the offer down. These moments made the game shine.

As with all games, there is an upgrade system. Your boss will earn notoriety and the higher this is the more options you'll unlock. Each boss/thug has their own talent tree and using weapons often will improve their proficiency, adding further bonuses.

But becoming the best gangster in town isn't just about stats. Players can accept an abundance of quests that develop their criminal enterprise. For example, one of my breweries found a body in the vats, so I was led on a mystery to find out who had the audacity to kill someone on my property! In true roleplay fashion, these storylines can resolve in many ways depending on your approach. If you have high persuasion skills you can sweet talk them. If you're intimidating, you can beat them into submission. What I loved about these quests was how they built your character. I decided Daniel Mckee Jackson was going to be a respectable gentleman and thus resolved quests peacefully when I could... I mean when you wear a top hat how can you not be a gentleman!

Once you have an established empire you can assign thugs as advisers, underbosses, and lieutenants. I enjoyed this element as the game didn't become static. It felt like I was continually growing my empire and moving forward with the business.

Ultimately, all these mechanics tied together and created a real feeling of progression and growth. My small-time crook was becoming the master of Chicago.

To become the best gangster, you need to rule Chicago. You do this by taking control of districts and neighbourhoods. However, to own more neighbourhoods you've got to stamp on a few feet. There are other gangs on the map fighting for space and some will take up shop where they're not wanted.

Yet, sometimes going full Capone isn't the solution. To be an honourable gangster you can invite other mobsters to sit-downs. These are a great addition to the game as you get to watch overegged dialogue and choose how you want to handle a situation. You can demand tribute or throw negotiations back in an adversary's face.

Personally, I found diplomacy a bit weak. Being diplomatic meant I wasn't warring with everyone and allowed for trade. But in the grand scheme of things I didn't get what I wanted. Instead, I found it easier to turn up at a rival's front door and kick em' out of business. But each to their own playstyle.

At its heart, Empire of Sin is a sim game. To run your empire, you must secure buildings and turn them into rackets; speakeasies, casinos, brothels, breweries. These buildings earn you money so you can hire thugs, buy out gangs, and bribe the boys in blue. Rackets can also be upgraded to improve your profit margins.

When building rackets make sure you do so with synergies in mind. If you build rackets in correspondence with poker scoring you can gain extra buffs. For example, building 3 brothels in a district will give you 3 of a kind synergy and you'll profit more. The game never explicitly tells you about this system so make sure you investigate it. It will help with the bank balance.

Managing rackets can be fun and it's rewarding to upgrade them. Over time, low-level rackets may draw the attention of the police and get shut down. Be wary! I enjoyed upgrading my breweries so I could produce the good stuff, Whiskey. It's a top seller!

When you tire of sit-downs and city management you can throw yourself into the action. The combat is like XCOM's; you cycle through characters and choose actions. Every move is like a game of chess, and you know a wrong move may kill a valuable teammate. Initially, I found the combat clunky. But as I grew my roster and built a dynamic team the combat flourished, as I had more abilities to play with.

Yet, despite its foundations, combat can suffer the more you play. Due to budget restraints, map assets are continuously reused. Once you know how to tackle each location, combat begins to lose its strategical depth. Although, I'm still shocked when Norah Quinn, my medic, lands a headshot with her sniper rifle. Trust me it's a rarity.

One thing that cannot be questioned is Romero's love of the prohibition era. The aesthetics, although not Triple-A billing, are lovely to look at. The city is roaring, and each location is thematic and atmospheric; I especially love the speakeasy design.

Along with graphics, this game delivers with its audio. The soundtrack is delightful, and the effects are authentic. The voice acting is theatrical but feels reminiscent of The Godfather.

Weapons are tremendous as you kit up with fan favourites like The Tommy Gun and brandish a pair of golden knuckle dusters.

Empire of Sin does a good job of capturing the 1920s setting. The music, game design, and hammy voice acting bring this era to life. I thoroughly enjoyed exploring the streets of Chicago and planning takeovers.

Diverse gameplay and an evolving story keep the game fresh throughout. Each mobster has a unique story to follow which adds replay value. After I'd finished my campaign, I was eager to start again and explore different bosses and thugs.

Sadly, for all its boons, the game is highly repetitive and once you've been to every location firefights become a chore. The reused assets become eyesores as you log more hours and aesthetic variation dwindles. Also, certain mechanics aren't quite established - like police activity and diplomacy.

Empire of Sin is a worthy adventure for those who want a gangster sim experience. Upon release, this game had many issues. But two years on the patches seem to have done the trick. If you were avoiding the game due to its bad press, I can safely say it's playable and you won't be walking into any infamous bugs… only infamous gangsters.