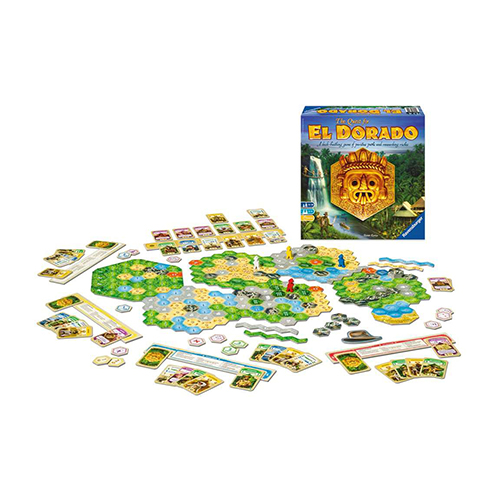 you could earn 3379 victory points

you could earn 3379 victory points

Reiner Knizia is a well-known name in the board game world. A prolific designer with some of the best games ever made coming from his huge brain. The Quest for El Dorado is a racing game that uses the card-based mechanic of deck-building. In a deck-building game players all start with the same hand of basic cards, that they improve throughout the game – leading to drastically …
Read More
Category Board Games Tags Golden Pear, Great Gifts, Podcast Approved, Ravensburger SKU TRV-26754 Availability 5+ in stock
Share
Share this
85%

Reiner Knizia is a well-known name in the board game world. A prolific designer with some of the best games ever made coming from his huge brain. The Quest for El Dorado is a racing game that uses the card-based mechanic of deck-building.

In a deck-building game players all start with the same hand of basic cards, that they improve throughout the game - leading to drastically different decks between players. The fun comes from reading the situation of the game and building a deck that efficiently deals with it.

Your deck in El Dorado will do one of three things:

To move you need to play a card with the same terrain and a power rating that is equal or higher than the hex you wish to enter. Terrain types are jungle, water, and gold(!) but there are also special spaces that require you to discard any card you play or even remove it from the game. If you decide instead to improve your deck you can use cards to buy from the market. Gold cards are worth their power, and every other card is worth half a gold.

Purple cards introduce powerful actions, such as moving onto any hex or drawing more cards, which can be incredibly useful. However, don’t be drawn in too far by shiny upgrades, as this is a race and you still need to move! The Tracks are made from modular double-sided boards which gives you an array of races to create and try, with a guide to how to get the best experience from the game.

El Dorado straddles the line between an approachable family game and an enjoyable game night game with ease. It is simple enough for younger players but with enough options to keep hardened gamers involved!

El Dorado, legendary myth, tribal leader, golden city, subject of books, films and one awful British soap opera. Thankfully, this Reiner Knizia game is about the legend rather than the woodenly acted drama. The Quest for El Dorado sees up to four adventurers race to the golden city using a deck-building mechanic. Knizia is known for some amazing games and some more forgetful ones, where does El Dorado fall in the Knizia Spectrum (TM)?

The Quest for El Dorado

Each player starts with the exact same eight cards which they shuffle together and draw four for their starting hand. These cards are all of one strength and relate to the hexes on the modular board.

A machete of strength one will allow you to move on to a hex with one machete indicated on it. Machete cards are used to move on to jungle hexes, oar cards onto water hexes and gold cards to move on to gold hexes. Instead of using these cards to move you can use them for money to purchase a new better card. Gold cards are worth their strength and every other card is worth half a gold. Cards in the base game go up to five cost, but there is a clever little seeding system in play to stop you being able to buy exactly what you want when you want.

The market starts with the six pre-determined cards in it, each in a pile of three. Once this pile is empty, the next player to buy a card may fill the gap by buying any of the other cards. This lets you shape your tactics, but also makes the card you have chosen available to your opponents. This simple mechanic creates some difficult decisions! Despite this, all these cards have their uses, so it is easy for younger players to get in on the action and not lose out.

The Rest of El Dorado?

Maps are made from double-sided larger hexes boards which can be put out in a myriad of combinations, and the box includes plans for a number of tracks ranging from easy too difficult, and also includes guidelines for building your own. In two-player mode you will race with two meeples instead of one, and there is an advanced cave variant to keep things spicy.

The worst thing I can say about the components is the cards are those mini cards rather than standard sized, and though I understand the space-saving reasons for using them they just don't shuffle or play as well as regular cards.

The Best of El Dorado

As a fan of deck-building games like Shards of Infinity and Star Realms, playing El Dorado is really interesting. My usual tactic of buying a few decent cards as early as possible doesn't seem to work as everyone else is halfway across the map by the time I have left the first tile! You have to remember that this is a race and moving is important. Yes, that six machete card will be very useful on the last tile but if you don't get to the last tile it's not going to help much at all. Then, there are the purple cards which give bonus powers like the ability to draw more cards or enter any tile.

The Quest for El Dorado is an easy game to recommend. Great for beginners, and seasoned gamers alike, the deck-building flows naturally into the racing gameplay, presenting lots of good choices without overwhelming.

Bottom Line - 'El Dorado is an excellent game for any collection with it's easy to learn approach and compelling gameplay.'