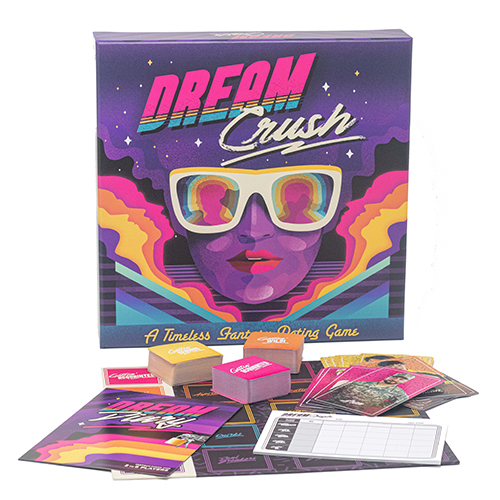 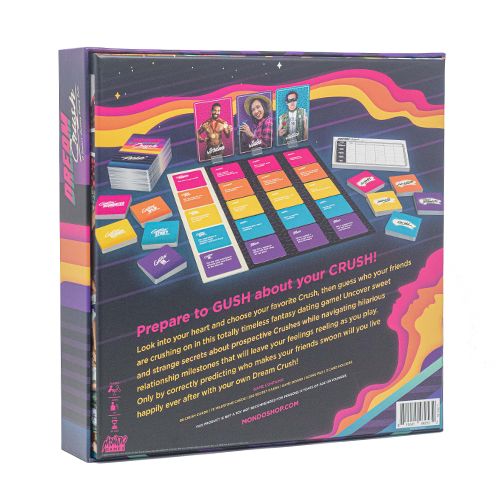 Prepare to GUSH about your CRUSH! Look into your heart and choose your favorite Crush, then guess who your friends are crushing on in this totally timeless fantasy dating game! Uncover sweet and strange secrets about prospective Crushes while navigating hilarious relationship milestones that will leave your feelings reeling as you play. Only by correctly predicting who makes your fr…
Read More
Category Board Games Tags Best Sellers, Girls Night In SKU ZBG-MNGDC001 Availability 3+ in stock
Share
Share this
80%

Prepare to GUSH about your CRUSH!

Look into your heart and choose your favorite Crush, then guess who your friends are crushing on in this totally timeless fantasy dating game! Uncover sweet and strange secrets about prospective Crushes while navigating hilarious relationship milestones that will leave your feelings reeling as you play. Only by correctly predicting who makes your friends swoon will you live happily ever after with your own Dream Crush!

Inspired by the classic dating games of the past half-century or so, Dream Crush was brought to life by Found Footage Fest cofounder Nick Prueher, with graphic design by Chris Bilheimer and the Mondo team, original artwork by We Buy Your Kids, and incredible photography by Carli Davidson featuring a gorgeous cast of Crushes.

The game is played over five rounds: in each round, a Milestone Card with steadily increasing impact is revealed (ex: “They ask you to be on their bar trivia team” or “You must co-sign a lease with one Crush”. Next, a Secret about each Crush is revealed, lending insight into their unique personalities and lifestyles.

Each player secretly chooses a Crush to embark upon the Milestone with, writing it on their scorecard, while also predicting who their friends will pick. Once everyone has recorded their answers, players take turns revealing their choices, often engaging in passionate table-talk defending their decision-making process (which becomes more agonizing as the rounds pass).

All correct guesses count as points toward a total that will determine the winner at the end of the game.

Every now and again I think back to a time when I would dance around my bedroom listening to pop music. I'd sing along in the direction of a poster on the wall of my crush. I'd have my parents banging on my door for being too loud, but it would just get me more angsty and I would sing even louder.

Anyway, Dream Crush is a timeless fantasy dating game published by Mondo Games. In the game, you are given three people to choose as your crush. The game is played over five rounds, and with each round, you learn slightly more about the candidates. After every round you write down who your crush is, as well as who you think everyone else has chosen. You get a point for every correct guess. The person with the most points is the winner.

Party games do tend to be the marmite of the gaming world. They're loved by many because they are light on rules but high on entertainment. They are also hated by the board game purists for not being challenging enough. If you are the former rather than the latter, then there's a lot of fun to be had with this game.

That is Dream Crush in a nutshell. So let me start off by telling you why I love this game so much. The first thing that drew me in was the artwork. It is so deliciously 80s. The use of neon colours and bold patterns is just a complete winner for me. The portrait cards are also very well made, and you feel the personality coming from each card. This then brings us to the 'secrets' you learn about your crushes. When I learnt that Oakley the beardy lumberjack aspires to open a pastry shop and sell macarons, I was like "awww, he's strong AND sensitive!" It was going so well until the last round, where I found out he voted for Trump in 2016. At that point, I had to say goodbye to him and move on.

At the end of every round, you are invited to not only disclose who you chose but also explain why. Sometimes your friends might shock you (one of my friends was so taken by Oakley they were willing to overlook the Trump voting), and some might just reaffirm who you thought they were. Whilst I wouldn't say the game or scenarios themselves were always funny, the conversations that came from them were. The game at times became secondary because you find yourself joking and laughing about your friend's choices. That doesn't make Dream Crush a forgettable game, because I feel like party games should do this. They should be an enabler of fun and laughter.

The box estimates a playtime of about 30 minutes, but I don't think I've had a game shorter than an hour. Again, that's not a bad thing, it just shows how carried away we get playing it. The rule book (or dream diary as it's called) also suggests variants to change the gameplay. The first variant invites you to play the game blind, with crushes face down. I've seen 'Love is Blind' on Netflix and that is a recipe for disaster. I guess for people less familiar with that, it would be the same as 'Blind Date.' Even better if you have someone to play the roles of Cilla and 'Our Graham.' There is also a blank card in each deck to create your own secrets for the game.

No Likey? No Lighty!

For balance, I should probably mention the parts I would definitely swipe left on. The first thing is the scenarios. In each round of the game, you are supposed to be in a certain place when you find out your crush's secrets. I don't think the scenarios add anything to the game, as often they're irrelevant to the secrets you learn. It doesn't matter when and how you find out someone voted for Trump, it's just an automatic pass. It's a shame that there are so few scorecards as well. I know that you can just reuse, but often erasing the same sheet over and over makes them worn and tatty. It gives the feeling that Dream Crush is around for a good time, not a long time.

Overall, Dream Crush is a definite swipe right. The artwork and portraits are an absolute joy, and the way your perception of a person can turn on one piece of information makes for a highly enjoyable game. It does rely on you having the right group of people, but Dream Crush has been such a joy to play.