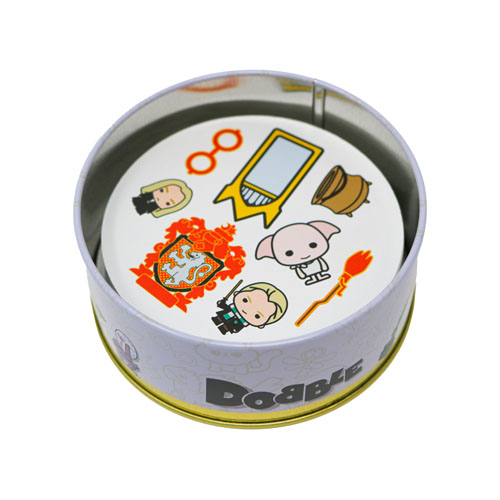 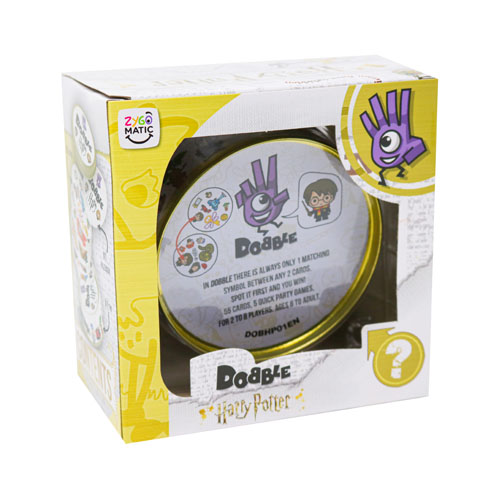 The smash-hit game of speedy observation gets a magical twist! Perfect for fans of J.K. Rowling's wizarding world, Dobble Harry Potter sees players trying to spot the single matching image between two cards. Can you find the match among chibi-style drawings of Harry, Hermione and Ron, magical wands and creatures, the houses of Hogwarts and more?

Themes in games are a fickle thing. There is a fine line between thematic genius, overboard, and missing the key elements. Too much volume and you'll take away from the game itself by drowning it in pop-culture references. Not enough and it's just a game with a bit of paint on it. It's tricky. And of course, it's not as simple as just getting it perfect every time. It's game dependent. Luckily, some games just adopt a theme naturally and require no massive changes. A few image drop-ins and it works. It becomes that theme, effortlessly. A game that, time and again, picks up a theme naturally, is Dobble by Asmodee. Specifically for us, Dobble Harry Potter. Dobble is already a tremendously versatile game, but having it in a fan favourite flavour just enhances that fun.

Dobble is a weird game from the outset. It isn't just one game really, it's several. Each runs on the golden rule of spotting a specified figure before your opponents, what you do next is determined by the choice of game being played. It's worth having a good look at the cards beforehand to see the symbols. Make it so you can spot a Slytherin from a Hufflepuff, a Granger from a Lovegood, an Elf from a Philosopher's Stone... you get the idea.

Objective? Collect the most cards. To set up, deal a card to everyone and leave the rest face-up. When the game starts, if you spot a matching symbol, call it and take the card. The winner is whoever has the most cards.

Objective? Be the first to have no cards. It works in the opposite way to The Tower. Deal all but one card out. When the game begins, if you spot a matching symbol, call it and add your card to the pile.

Objective? Have the most "potatoes" after however many rounds. Every player gets a card visible to everyone. When you spot a matching symbol, pass your card to that player. If you have all the cards you keep the stack. This counts against you.

Objective? Have the least cards. It works like a reverse of The Tower. You all receive one card and leave the rest in a stack. You need to be looking at your opponents' cards and the stack to find matches. When you see one, give them the card from the centre.

Objective? Have the most cards. This one works on a grid. You need to deal nine cards for all to see. Then you have to find three matching symbols across the cards, call it and take them. You then replace the taken cards from the stack.

Dobble, as a game, is already pretty diverse, but the fact you can play a round and switch it out effortlessly made it the perfect on the go game. No messing around with cards, shuffling, tidying... it's a case of collecting the cards and handing them out again as needed. Easy! There is a charm to the game's simplicity that combines superbly with its imagery. The theme is clear and unmistakable. With that, the symbols are identifiable from one another without feeling out of place! However, they're also similar enough to pose a challenge to spot in the heat of the moment. Of course, knowing the theme doesn't pose a barrier exactly, but it helps to be able to explain the characters/symbolisms.

In the heat of the moment, there is no scope for complaints or moans. Nor is there scope to argue about whether man with beard is a suitable description for the Grand Wizard Dumbledore. You know when someone knows what they mean - you won't have time to lie either way! It's a game of pace, speed, and watching. Opportunity strikes when it strikes, and the fastest voice will be beaten by the fastest hand! With this though, we found there to be some wizardly chivalry. You know when someone has beaten you to noticing the three Weasleys staring at you across the cards. No amount of arguing would do any good, as this isn't a game for breaks or stops. You spot, you say, you do.

Dobble is already a tremendously versatile game, but having it in a Harry Potter theme is extra magical. The immediacy it sparks wizardly conversations is impressive - one of our gamers is not a Potter Head, a proper muggle. Through gritted teeth she agreed to play, it may have only been the Dobble element that encouraged her.

Only through the power of witchcraft and wizardry was she swayed to ask questions about the characters. She even named some by name by the end! "That Gothic looking bloke" to Severus Snape, "Blue Flying Thing" became Pixie, and "Dragon" became.. well, a dragon. But it felt like it meant something more! Not all mountains can be conquered, but it was progress. She may even consider reading one of the books! Who knows?

The games themselves are similar in style but feel different. A small change makes a big impact! The Tower is centred around taking from the middle, gaining, then needing to look again. There is time between. Whereas in The Well, you're dropping your cards on that you know. You're adding the familiar to the focus, meaning if you're watching for a Dragon, and there's one on your next card, you're going to be on a roll!

Our favourite game for this one was The Poisoned Gift. It just felt more Harry Potter-esque. Everyone's watching the card, then Expelliarmus! (Or something like that.) You hit someone with a shocking card after they've spent a while studying it themselves, and now they're worse off again.

Dobble Harry Potter is a Hogwarts goer's easy access, travel game. It's lightweight in both its size and its complexity, but that's not to say it doesn't leave an impact. We played this while waiting for a meal, a guest, and a plane, and every time it was delightful. It was never the game we had to play to kill time, but the one we wanted to! What's more, is the appeal the theme gives. Whether they were a board gamer or not, the fans of Harry Potter and his whacky adventures were besotted with Dobble's charm. It is a winner all around!

If you're in need of a travel game, a lighter game, or a game that is tremendously fun, Dobble is a good call. But if you're a Potter fan, then Dobble Harry Potter is the one for you, guaranteed.

Editors note: This blog was originally published on October 18th, 2019. Updated on February 1st, 2022 to improve the information available.