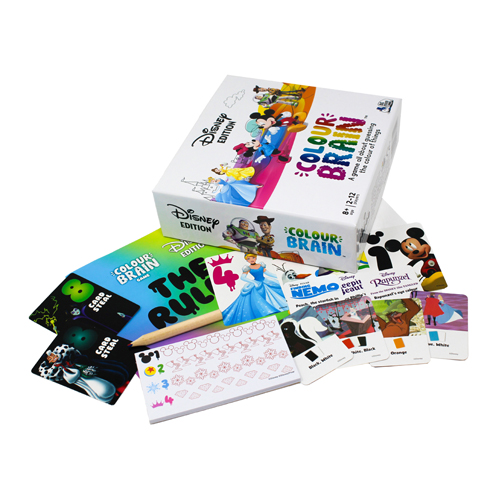 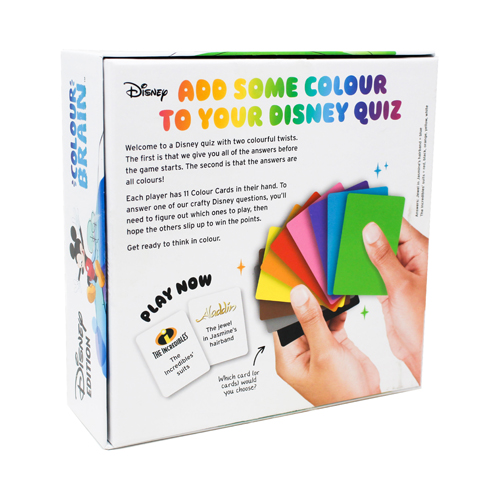 Disney Colourbrain Big Potato Games are one of the best publishers for unique party games. Whether it is rhyming your way through puzzles in Obama Llama, wearing the tin foil hat of physic blocking in Head Hackers, or following the cow crowd in Herd Mentality, they always have a trick up their sleeves. Colourbrain aims to be the quiz for those who aren’t good at quizzes. It does t…
Read More
Category Board Games Tags 6-8 Years, 9-11 Years, Best Sellers, Big Potato, Colourbrain, Disney, Family, Fun For All the Family, Fun for Kids, Great For Two, Zatu Silver Award SKU ZBP-DC01 Availability 3+ in stock
Share
Share this
73%

Big Potato Games are one of the best publishers for unique party games. Whether it is rhyming your way through puzzles in Obama Llama, wearing the tin foil hat of physic blocking in Head Hackers, or following the cow crowd in Herd Mentality, they always have a trick up their sleeves.

Colourbrain aims to be the quiz for those who aren’t good at quizzes. It does this by handing you all the answer cards in the form of 11 colour cards. Helpfully these are coloured and written on so that there is no debate about what colour a card is.

A question card will be drawn and it’s your job to answer with the relevant colour cards. For example you might be asked about the colours of the power rangers and you’d answer with the correct cards. You’d also hope that some of the other players get it wrong because you score a point for each other player that gets the answer wrong!

Each player of team also gets a power card to use, when they are losing to severely limit the leading teams options and give them a chance to catch up. Because the questions are greatly varied across different themes and categories every player feels involved and has a good chance to compete.

This Disney variant, unsurprisingly, tailors all the questions to Disney and all its characters, films and tv shows. The questions have a surprisingly wide range and can be more difficult than you’d expect. But this is a great version of Colourbrain for families, or too mix in with the main game or use the questions from for your little super fans!

Despite my very cold, mean looking exterior, it can be argued that inside I'm equally as cold and mean. But just under that layer of pure "Scrooge McDuck" is a true fan of Disney animated films. It's no secret that I love a good singalong, a cracking tale, a hero saving the day. I've even grown to enjoy it when the hero wins - though that's taken some time. I'm not quite the fountain of fairytale and happy endings knowledge as some others, but I know enough to do well in a pub quiz. Or in a round of Disney Colourbrain! It's a game for 2-12 players that takes around 20 minutes to play.

To set up Disney Colourbrain, establish each team's size. There can be up to four teams with any number of players in the team. (For sense, it is recommended to not surpass five in one team). These teams are then given a set of cards for their team. These are double sided with one being the team's number, and the other being one of eleven colours. The large stack of question cards is then placed somewhere all teams can access. Finally, place the scoring pad somewhere all players can access it.

To play, a card is placed so all can see the card's question. These cards are double sided with one side being a question and the other a picture which will give the answer. Teams must choose the colours of cards which will answer the question. This may require multiple cards to be played. Teams choose and play their card simultaneously. Once one team has played their cards, they shout "COLOURBRAIN!", as an indicator to others that they have 15 seconds before the answer will be revealed. Any team who had a correct answer gains a point on the pad. However, should all teams be correct then no one scores and the next question is worth an extra point. The final element of the game is the steal. The team in last place can play this against those in first place to steal eight of their colours for the next round.

The game doesn't last long due to the time constraint of others playing simultaneously. As soon as any team fills their score track, the win and the game is over.

Disney Colourbrain (or Colourbrain: Disney Edition depending on your flavour) is a lovely party game for all ages. The accessibility is incredibly low and there is no learning curve. What's more is it allows you (me) to express their passion for all things Disney without being overbearing!

All The Intellectual Property Is Here!

It's fair to say that Disney have produced their fair share of movies. And bought their fair share of smaller companies to bring them under the Disney umbrella. In fact, most everything may be Disney in the future! For now, however, the wide selection is still incredibly vast... so does Disney Colourbrain cater to this wide palette of variety? Yes it does. And it does so with surprising reach!

It was astounding the range of Disney content in the box across many years. I'm fortunate in having a child as an excuse to watch more Disney, so I'm up to scratch on the recent things. But it was the older stuff I was able to nail! But what threw me was those moments where you knew the film. Knew the character. Could visualise everything in your head and guess a colour, and somehow never notice that Dumbo's magic feather was black. (I even watched it again to check, it is!) And I feel that makes the game quite accessible even when against a Disney buff.

What else helped was the use of the images from the specific scenes which best showed the evidence. I would have argued no end about things like Pinocchio's eye colour, had they not laid it bare for the world to see. You can't argue with the facts, and inevitably it results in those "Oh yeah!" moments. And I also love the numerousness of the cards. There's so many. So so many. More than 200, actually! It's tremendous, but also means I've got no chance of remembering every card's answer. It's all down to knowledge of logical (lucky) guesses!

Disney Colourbrain has a way to stop you having that one in eleven chance of guessing correctly every time. Guessing multiple colours. Simple, but effective. Suddenly Woody's bandana is three colours, not two like you though. And Nemo isn't just orange and white. There's a third colour there too.

What really slowed me down were the big numbers I wasn't expecting. It was neck and neck between myself and the other Disney genius of the group. And we got asked for five colours. Five! The audacity of the animators to make Mrs. Potts the Teapot five colours! Needless to say I lost. But it was intense and awesome. Having us both just name colours until we hit a film we hadn't seen would have killed the momentum and fun we had whilst playing. By spicing it up with some extra expectations, we were taken aback and put back into our places.

Banned from Disneyland for Theft...

The only element of this game I didn't understand entirely was the steal. It made no sense to me, personally. As the last place team, you can steal eight cards from the first place team. That's all well and good, but logistically it didn't work every time. If there were two points up for grabs, and one team on nine and another on eight, either could win. I target the leaders who know nothing about Tangled and I've lost regardless.

What's more is how unfair it can feel. Eight cards out of eleven taken is effectively a guaranteed loss, right? We haven't seen the game won on a steal round before, and that's simple due to the statistical impossibility of it. It could happen, and it would be epic, but the pretence of a massive steal doesn't work for me. Personally, I'd play it as play against anyone. But hey, maybe it's just lost on me.

Disney Colourbrain is a game for nearly everyone. If you've seen, heard of, or passed a poster with any Disney content on it, you can definitely have a go. Sometime it's logic, sometimes memory, sometimes a guess. But as a team game it's one a lot of people can have a crack at. The game is undeniably simple. In fact, it should probably be classed as a party game, however the fact you won't be distracted from the game until it's over, it supersedes that label. We really enjoyed Disney Colourbrain, and can easily see families with children enjoying this too.