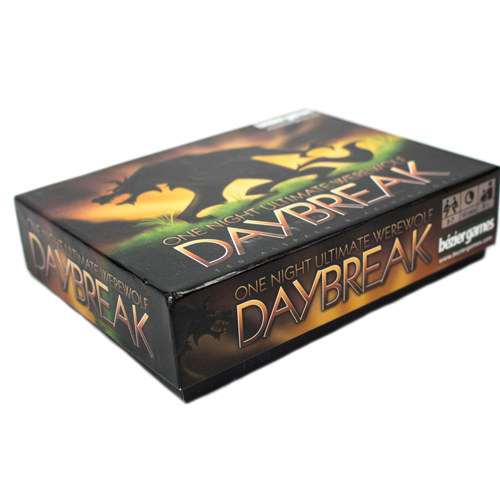 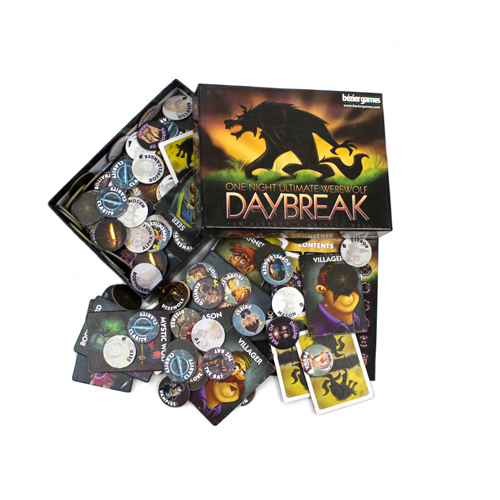 One Night Ultimate Werewolf Daybreak is a fast game for 3-7 players in which everyone gets a hidden role each with a special ability. (No plain villagers here!) In the course of a single morning your village will decide who among them is a werewolf…because all it takes is finding one werewolf to win! Daybreak includes eleven new roles and it can be played on its own or combine…
Read More
Category Board Games Tags Akihisa Okui, Companion App, One Night Ultimate..., Podcast Approved, Ted Alspach SKU ZBG-BEZONDB Availability 3+ in stock
Share
Share this
87%

One Night Ultimate Werewolf Daybreak is a fast game for 3-7 players in which everyone gets a hidden role, each with a special ability. (No plain "villagers" here!) In the course of a single morning, your village will decide who among them is a werewolf...because all it takes is finding one werewolf to win! Daybreak includes eleven new roles, and it can be played on its own or combined with the original One Night Ultimate Werewolf game; when combined, you can have up to ten players in a single game.

Inside this small, portable box, you will find 11 new roles, with 8 new roles for the village team and 3 for the werewolves. There is also a token for each character which can be used to claim roles. Special tokens can be used for the sentinel and curator which relate to their card’s abilities. Just like the base game, the cards are printed on thick quality card which means they cannot be easily damaged or bent.

While Daybreak can be played as a standalone game, it's recommended that you buy the base game before purchasing this. These roles are more advanced, adding complexity for experienced players, but can make the game trickier for new players. If you haven’t played the base game before, please consider having a look at it since I will continue this review assuming you’ve got the base game and know how to play. Now that’s out of the way, let’s have a look at those shiny new role cards!

Each role is daybreak is completely new, meaning no more pesky villagers. The roles vary in complexity, with the ‘Apprentice Seer’ being a simplified version of the Seer, while the Curator comes with 6 tokens that all have their own separate effects. My group enjoyed playing with almost all of these roles, the only real ‘dud’ was the ‘Village Idiot’, a card which switches everyone’s cards to the left or right. While the chaos caused by this ability can be fun at first, eventually it becomes repetitive as the game is less about deceiving people and more about trying to figure out what your own role is. The other village roles are all great and very flexible additions to the game.

The new werewolf roles are fun to play with as well and add a lot of variety to the game. The dream wolf especially was a favourite in my group. The dream wolf doesn’t know who the other werewolves are. This means they have to try and piece together who their teammates are without revealing their identity. It’s a lot of fun!

Daybreak: One Night Ultimate Werewolf is a great addition to the base game, adding new roles for both casual and competitive groups. As mentioned before, it is recommended not to purchase this before the base game. However, this deducts very little from the overall value of the product. If you enjoyed playing the base game, it’s almost impossible to go wrong here.