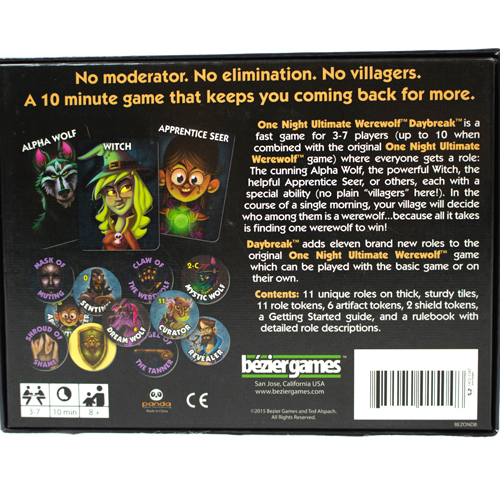 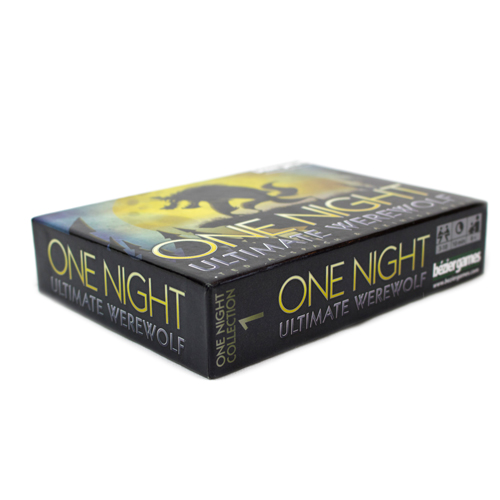 One Night Ultimate Werewolf will have you on the edge of your seat, lying through your teeth and trying to fend off the judgemental finger-pointing, especially if you have been unfortunate enough to have been given the dreaded Werewolf card! One Night Ultimate Werewolf is a fast-paced, bluffing card game for 3-10 players in which players each take on a role very different to each ot…
Read More
Category Board Games Tags Akihisa Okui, Best Sellers, Bezier Games, Big Groups, Dice Tower, Fun for Kids, Golden Pear, One Night Ultimate..., Podcast Approved, Ted Alspach, Top 20 Party Games, Value For Money, Zatu Gold Award SKU ZBG-BEZONUW Availability 5+ in stock
Share
Share this
89%

One Night Ultimate Werewolf will have you on the edge of your seat, lying through your teeth and trying to fend off the judgemental finger-pointing, especially if you have been unfortunate enough to have been given the dreaded Werewolf card!

One Night Ultimate Werewolf is a fast-paced, bluffing card game for 3-10 players in which players each take on a role very different to each other! You could be a harmless villager, defending your village from the night-crawling terror! You could be an all-seeing Seer, with the ability to see what others cannot! Or you could be the sly Troublemaker, who, as the name suggests, is intent on causing trouble and outrage, but of course, as the name would suggest one, or two of you could be the moon-bathing menace that is, a WEREWOLF!

As night draws in, the players must sleep by closing their eyes. Their characters actions are performed and chaos may ensue, but who would know! You are all asleep!!

Day breaks, and the accusations begin! Be honest, lie through your teeth and accuse others! Do whatever it takes to hide your true identity because when the time is up, and the chips are down, the last thing you want is to be the Werewolf with all the fingers pointing at you. Players will vote on who they think is the Werewolf and if you are found to have that card, you unfortunately meet a grizzly end, the villagers being victorious. However, if you have managed to win over the majority with your charm and prowess, and the players vote for a non-werewolf player, then the Werewolves steal victory and howl into the night!

One Night Ultimate Werewolf comes complete with a free to download companion app (highly recommended) which guides players through the game, while also throwing some creepy music into the mix!

This party game will have you bluffing and guessing to your heart's content and will have you coming back for more time and time again! This great, engaging game is a must have for any game night! Be warned though, you may not want to play this during a full moon!

So, you’re all sat around a table and you know that one of you is a werewolf. Although not a pleasant feeling, you know that it is your duty to find out who’s telling porkies, who the innocent bystanders are, and who is just plain confused. Welcome to the epic befuddlement that is One Night Ultimate Werewolf.

This game is a back-stabbing co-op for three to 10 players and can take as much time as you want it to. It comes in a beautiful little box and requires the free app to begin gameplay, unless you want one of you to sit out and adopt a smooth Morgan Freeman-esque voice for the whole game.

Role cards are shuffled at the start of the game, and each player receives one which they peep at in secret and place in front of them on the table. Three mystery cards are then placed in the middle of the table.

‘Everyone, close your eyes’ says the app, and you do so, Wink Murder style. Villagers need their rest, after all, Werewolf hunting doesn’t half wipe you out. The app then instructs you on when to ‘wake up’ during the night phase, as each player does so at different times depending on their card. When you wake up, the smooth voice of the app instructs you on what to do. This ranges from swapping your card with another card, to having a peep at another player’s card. Cue shenanigans.

By the time all this tomfoolery is over, and you’ve pulled some stealthy moved trying not to bump the person next to you as you swap cards, everyone opens their eyes and ‘wakes up’. At this point, you don’t know who’s who, who you are, and everything you thought you knew about who’s who could be wrong. Make sense?

The app gives you a time period to work out collectively who you think the Werewolves are, and at the end, pull out your best finger guns and point at the culprits on the count of three. You win if most of you guess the Werewolves correctly, the Werewolves win if they avoid capture or their Minion gets shot, and the Tanner wins if he gets killed. Poor bloke.

One Night Ultimate Werewolf is a game that requires a play-through to understand. This can initially put people off, but sticking it out yields hours of fun. The best thing about this game is the flexibility.

You can opt for the extreme approach, putting in three Werewolves and a Minion in a small group of you, so that you can truly annihilate this poor little village. If more complex cards like the Doppelganger don’t suit you, you can just take them out and pop more of the cards that you like in.

The game is a hilarious quick warm-up to any board game night, or you could make it last an entire night in a murder-mystery dinner party style affair. Give your guests a role card before the night, let them dress up as villagers and spend the whole night trying to see who’s eating the raw steak.

This exciting party game is available right now at Zatu Games! You can also pick up the two expansions to the game, Daybreak and Vampire.