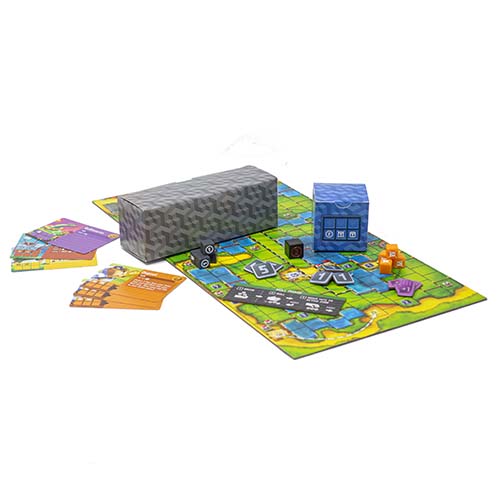 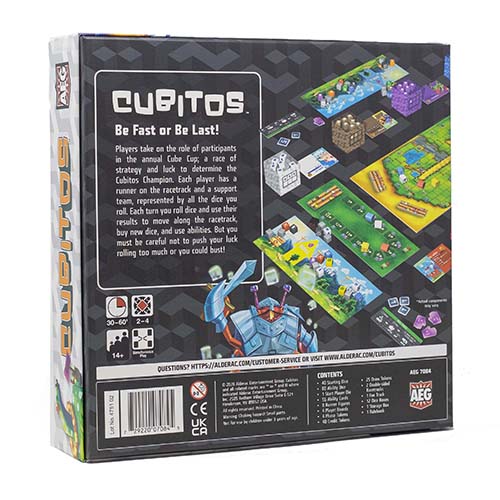 you could earn 4239 victory points

you could earn 4239 victory points

Cubitos In 2016 AEG released Automobiles a highly acclaimed bag building game. Bag building took the idea of deck building with cards and turned it into building up cubes, dice or meeples in a bag. Automobiles used cubes of different colours to race around a course. Cubes were given different abilities depending on cards that were assigned to them. There was a huge amount of variety…
Read More
Category Board Games Tags Alderac Entertainment Grouo, Dice Games SKU ZBG-AEG7084 Availability 3+ in stock
Share
Share this
91%

In 2016 AEG released Automobiles a highly acclaimed bag building game. Bag building took the idea of deck building with cards and turned it into building up cubes, dice or meeples in a bag. Automobiles used cubes of different colours to race around a course. Cubes were given different abilities depending on cards that were assigned to them. There was a huge amount of variety due to this, but the rally theme might have put some off.

Cubitos takes the core bag building and variety of Automobiles and turns it into more streamlined game with less rules overhead and more craziness. Including that cheese on the cover. Automobiles’ cubes are replaced with dice. Dice have blank faces and faces that give money or movement and special faces that activate their special powers.

Players don’t actually have a physical bag in Cubitos rather they have a player mat with draw, roll. activate and discard sections. At the start of a turn all players will roll dice up to their roll limit. This starts at 9. In the beginning you will only have rubbish gray dice, which yield very little but will get you started. Once you start getting other dice you will unlock more powerful movement and abilities.

There is four course included and they are the perfect size. On some spaces are power ups including free dice and money you can save round to round. Money generated from dice usually on lasts one round.

By stripping away the realistic racing theme Cubitos becomes a streamlined, fun and fast race game with tons of replay value. Also Automobiles has been out of print for a long time so you may struggle to get hold of it. That doesn’t matter though as Cubitos holds it’s own as a fun, engaging race game.

Welcome to the annual Cube Cup. A dice-rolling race game of strategy and luck which will determine who is the Cubitos Champion.

In Cubitos each player will have a meeple on the race track and a handful of dice that they roll on their turn. Dice are used to moving along the racetrack, buy new dice and use abilities. Any dice that show a face are kept and the rest re-rolled. You can keep rolling as many times as your like to get bigger and better rewards, but beware as if you roll your dice and get no hits then you bust.

Each coloured dice is used in all games but the abilities and the powers of these dice will change depending on the ability cards used. There are also multiple racetracks that you can play.

Cubitos is a dice rolling, highly replay-able and entertaining race game. There is a ton of variety in the box; four different racetracks/maps & seven different abilities for each of the eight different coloured dice make this a game with a multitude of combinations and permutations. The rulebook comes with ten recommended different track/ability setups but you can create your own combinations for endless possibilities (well maybe not endless, but you get the point).

It has the feeling of a deck builder, but with dice, that you can select which dice you pull from your reserve. Eventually, you will run out and you can move your exhausted dice to your available dice. This creates a fun dilemma, as you want to use all your good dice because they will give you the powers, bonuses or special abilities to push you forward. But using all your good dice in one turn will leave you with a couple of substandard turns. Balancing the dice you roll and figuring out which dice to take per turn is a fun game in itself.

The push your luck element has a feeling of Mystic Vale (by designer John D. Clair). You can keep pushing and pushing and rolling your dice. But the odds of you rolling blanks and going bust will increase the more times you roll. But sometimes you just need that one more die or ability. I absolutely love this tension and angst of wanting to roll again but not wanting to go bust. Sometimes it pays off and other times it doesn't, but either way, it is always fun and creates some laugh out loud moments.

Yet, going bust can be a viable option, especially early on. When you go bust you get to move up the fame track. This track can give you additional bonuses and benefits and can be worth it in the long run.

The abilities and bonuses of the coloured dice are very varied and you can create some very exciting and entertaining combos. Some give additional movement or money, others allow you gain or shed die and others let you avoid going bust altogether. There are always interesting things to look at, consider and hopefully purchase on your turn.

The turns themselves are pretty quick as the die rolling is simultaneous. Everyone can roll and groan when they go bust at the same time. After the die rolling player evaluates and perform their turns in player order. I also enjoy how the maps are all varied and different. There are bonuses and abilities on some of the spaces, with shortcuts, jet packs and ways to gain and remove dice from your pool.

Cubitos is a light-hearted game. It is a fun dice chucker that can create some tense moments. I would happily bring this out with experienced gamers and non-gamers alike. I don't think there is too much in the way of rules that are going to make this hard to grasp. The main complexity comes from the abilities of the dice and this can be tailored if needed.

Overall, I am loving Cubitos. I love the replayability, the fact that you can grab a big handful of 9 or more dice and roll them. Then do it again and again. Gain satisfying combos and abilities and race around a cool looking track. If you are after a dice chucking race game this one might be worth you checking out. Be warned though, the storage boxes for the dice are subpar and I think I may just put all mine in baggies and use component trays going forward. A very minor point against the game though.