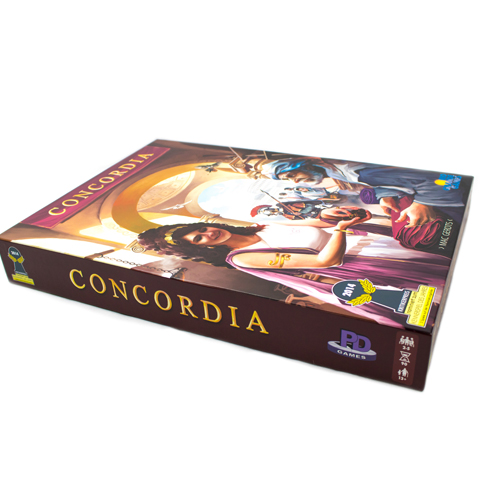 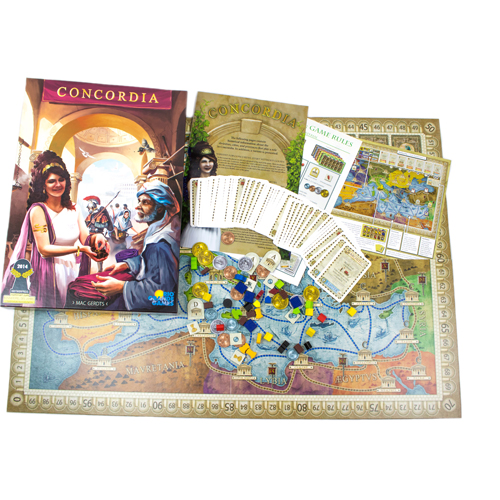 you could earn 3179 victory points

you could earn 3179 victory points

Two thousand years ago, the Roman Empire ruled the lands around the Mediterranean Sea. With peace at the borders, harmony inside the provinces, uniform law, and a common currency, the economy thrived and gave rise to mighty Roman dynasties as they expanded throughout the numerous cities. Guide one of these dynasties and send colonists to the remote realms of the Empire; develop your…
Read More
Category Board Games Tags Concordia, Golden Pear, Mac Gerdts, Rio Grande Games SKU ZBG-RGG499 Availability 3+ in stock
Share
Share this
95%

In Concordia two thousand years ago, the Roman Empire ruled the lands around the Mediterranean Sea. With peace at the borders, harmony inside the provinces, uniform law, and a common currency, the economy thrived and gave rise to mighty Roman dynasties as they expanded throughout the numerous cities. Guide one of these dynasties and send colonists to the remote realms of the Empire; develop your trade network; and appease the ancient gods for their favor — all to gain the chance to emerge victorious!

Concordia is a peaceful strategy game of economic development in Roman times. Instead of looking to the luck of dice or cards, players must rely on their strategic abilities. Be sure to watch your rivals to determine which goals they are pursuing and where you can outpace them! In the game, colonists are sent out from Rome to settle down in cities that produce bricks, food, tools, wine, and cloth. Each player starts with an identical set of playing cards and acquires more cards during the game. These cards serve two purposes:

Concordia is a strategy game that requires advance planning and consideration of your opponent's moves. Every game is different, not only because of the sequence of new cards on sale but also due to the modular layout of cities.When all cards have been sold, the game ends. The player with the most VPs from the gods (Jupiter, Saturnus, Mercurius, Minerva, Vesta, etc.) wins the game.

Rise of an Empire

At its height, the Roman Empire extended from Britannia, to Egypt and Babylonia, and encompassed the Mediterranean Sea. With uniform law, and a common currency established throughout the provinces, the economy boomed. From this foundation, savvy merchants could thrive and establish their own empires (of sorts), built on the trade of commodities. This is the setting for Concordia, a two - five player, mid-weight, strategy game of economic development.

Thematically, players each take control of an emerging merchant power in Rome. Your objective, ultimately, is to set yourself up for a windfall of end-game points. This is done by developing a trade network throughout the empire, and paying due respect to the gods. There is little left to luck in Concordia. To be successful you will need to plan ahead, and keep track of your opponents. When you understand what goals they are pursuing, you can adapt your strategy, to either outpace them, or focus elsewhere.

Whilst you will of course, be working to overhaul your opponents in the race for glory, Concordia is a peaceful game.  In keeping with euro-style abstract strategy games, there is no direct player conflict. In Concordia, there isn't even a particularly notable way in which you can indirectly block an opponent. At most, they may be temporarily disadvantaged when placing a trade house, which I'll cover later. Temporarily is the key word, because unless they have had the worst game ever, that disadvantage will be balanced elsewhere.

A Punch of Peace

Such a peaceful game may not appeal to everyone, I get that. I'm partial to a little friendly tabletop conflict, but don't let its peaceful nature put you off. Concordia presents a well designed, balanced, gaming experience that abstract strategy fans will appreciate. I rate it highly. The game provides you with ample scope to make decisions, and it has a high replay value - a value which is further increased by a number of map and content expansions.

Another big positive for Concordia is the ease in which it can be setup and taught. The rulebook covers four pages and it communicates game setup and player actions clearly. You can be up and running with new players in no time. When you are playing, gameplay is intuitive and smooth. The action cards will tell players all they need to know. Without the constant need to refer to the rules, you will all quickly become immersed and, hopefully, enjoy the experience. With that, we turn our attention to gameplay.

All roads lead to Rome

Or rather, in the case of Concordia, all roads lead from Rome. All players start the game in the eternal city with two colonists: one in a boat and one on foot.  From there, you can move between regions and cities via land and sea. During setup, each city is randomly assigned a token denoting the goods type produced there. Each region is assigned a bonus token, denoting the most valuable type of goods produced by a city in that region. Seven personality (action) cards are also laid out in a common market. The combination of starting cards and tiles will shape your initial strategy.

There are no game rounds in the standard sense. Instead, players will take turns until game end is triggered. During a turn, the active player will choose one personality card from their hand. They’ll take the action(s) as described on the card, then leave the card in front of them.

The personality cards are the driving force behind gameplay. Each player starts with an identical set of seven. Once a card is played, it remains in front of the player. Cards cannot be reclaimed (and played again), until the player uses a specific card to reclaim all of their cards. Actions available include moving colonists, gaining new colonists, establishing trade houses, purchasing personality cards, producing goods, and trading.

It is in the management of your hand, and the sequence in which you play cards, that your strategies will unfold. I particularly like this aspect of the game. The value of a card has the potential to change turn on turn. I enjoy the challenge of working out the best time and order in which to take certain actions to reap the most reward.

As I have alluded to earlier, player actions do not directly hinder opponents, which removes the worry about being 'blocked in'. However, the placement of trading houses is worth attention. All players can place a house in the same city, but the cost increases with every house already there. A particularly unlucky player may pay highly to place their houses, but generally they will have an advantage elsewhere.

The end game is triggered when a player places their last house on the board, or the last personality card is purchased. Every other player takes a final turn before proceeding to final scoring. This is where the influence of the gods is felt. Each personality card is related to one of six Roman gods, who award victory points (VP) before progress in a given area.

Players tally their progress in the stated area. They then multiply that value by the number of relevant god cards they possess. Mars, for example, awards 2 VP for each colonist the player has on the board. If a player has four colonists, they get 8 VP, multiplied by the number of Mars personality cards they have.

The player with the most VP wins.

Concordia is a peaceful strategy game with high replay value, which is quick to learn but offers an immersive experience. If you are a fan of abstract strategy games I recommend it highly. It has become a personal favourite of mine. It is a game I can enjoy both with casual gaming groups and those who like to play more competitively.