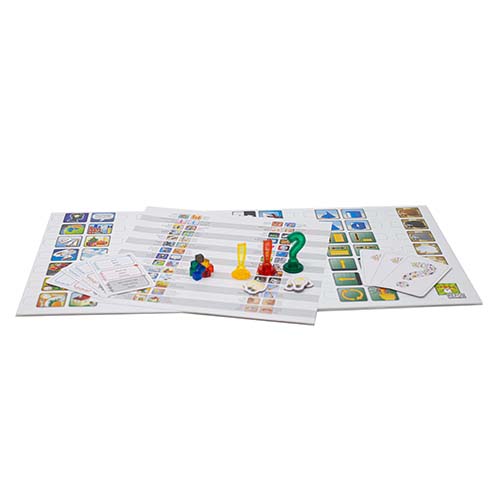 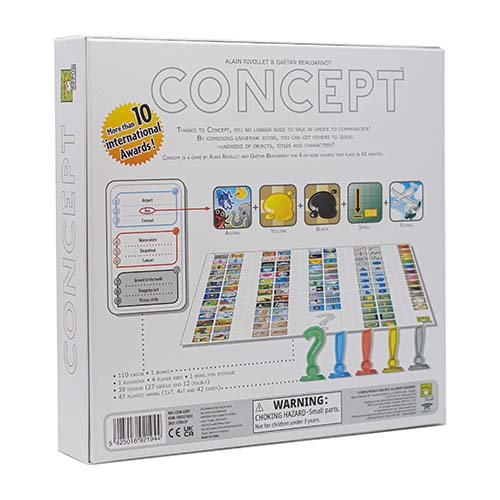 Imagine you’re playing Charades, but instead of using the medium of mime you now have a board covered in very generic pictures and symbols. With this board and its pictures you have a collection of coloured plastic items, like a Question Mark, a couple of Exclamation Marks and some cubes. Now all you need do is to convey to your teammates what the object, personality, action or t…
Read More
Category Board Games Tags 9-11 Years, Asmodee, Best Sellers, Concept, Value For Money, Zatu Gold Award SKU ZBG-ASMCONUS01 Availability 3+ in stock
Share
Share this
88%

Imagine you’re playing Charades, but instead of using the medium of mime you now have a board covered in very generic pictures and symbols. With this board and its pictures you have a collection of coloured plastic items, like a Question Mark, a couple of Exclamation Marks and some cubes.

Now all you need do is to convey to your teammates what the object, personality, action or thing, basically what the concept is, written on the card.

Concept, from Repos Production, is a 4-12 player, party, deduction game, that lasts around 40 minutes and is as funny as it is frustrating! How many times can someone bang the same picture with an Exclamation Mark before either they realise the clue isn’t coming across or that their teammates cannot see the blatantly obvious answer!

Get the answer right and you’re rewarded with two Lightbulb tokens. Whomever has the most of these at the end of the game wins!

If your family or game groups enjoys fun party games, make sure you bag this one today!

Concept is a communication game published by Repos Production of 7 Wonders fame. It shares similar elements to traditional family games like Charades or Pictionary, in that players take it in turns to convey a word or phrase indirectly, using creativity and communication skills.

The real charm of Concept is in how this is done. Gone are the days of rotating your hand next to your head for 'film', or flapping your arms madly for 'bird'. In this game, players are given a board dotted with images, and coloured pieces to link those images together. This allows them to form the 'concept' of their word or phrase.

Learning how to play is incredibly simple; the rulebook is more a fold-out than a book!

To begin playing, the board is set up within easy reach of all the players. Each player is handed a useful reference guide for the images on the board. Next, players shuffle up the deck of words and phrases and place that next to the board also; I've found it easier to have one person as the designated 'dealer' for these.

For the standard out-of-the-box game, you should also separate the lightbulb point tokens into one and two-bulb piles. Place the white dish with the coloured pieces into it, next to these token piles. Find a way to determine first player/team (such as flipping a coin or rock-paper-scissors) and you're good to go. Quick and easy!

Players will then take it in turns, either in singles or in teams depending on the number of players, to form their concept using the board. The player performing the concept will draw a card from the deck. they must select a concept from the 'easy', 'hard', and 'challenging' categories. Once a concept is chosen, the player then begins placing pieces on the board to illustrate their concept. An example of how a concept, the board, and the pieces are used in the game could be as follows;

Player A has picked the word 'Magpie', an easy category concept (they have very little faith in their friends). They begin by placing their ? piece on the 'Animal' icon; this is the main theme of their concept. Immediately players start rattling out all the animals they can think of. Confident they won't guess a specific bird straight off the bat, Player A places cubes of the same colour as the ? piece on the colours black and white.

The other players guess zebra, skunk, a cow, even a white tiger. Sighing, the player decides to start a 'sub-concept', usually some form of descriptive or aligning concept that has a lot to do with the main concept.

Player A places the ! piece of a different colour on the icon representing air, wind, blow etc. The other players realise it's an animal that is related to the air, assume it's a flying animal, and suddenly understand the concept. They all begin shouting the word Magpie over and over with glee. Player A hands their team a 2-point token, takes a 1-point token for himself, and play passes around the table for someone else to draw a card. Play continues like this until all the 2-point tokens have been claimed, as previously stated.

Alternatively however, players can simply play as a table and try to rack up a set amount of points together. This alternative method is hinted at in the rules themselves. This is the only way I and my friends and family now play ourselves, as its much more engaging and allows for more creativity and fun. In this way of playing, I've found you can base it on rounds, with rounds consisting of every player having one go.

You can scale the amount of rounds and the amount of points required up or down depending on player count. In this way, the game is enormously scaleable, and it makes itself a staple for big parties and small gatherings alike.

An example of this is how I, my partner, and my brother and his partner recently played. We played 4 rounds and aimed for 30 points. We then scored concepts based on their category; 1 point for easy, 2 points for Hard, and 3 points for Challenging.

Concept is an absolute stalwart as far as social or party games go.

With this in your possession, old haunts like Charades will be a thing of the past. Due to this, it makes it an especially useful gateway game for family members or friends who aren't aware of the tens of thousands of excellent board games out there. It has an infectious quality! You're eagerly awaiting your turn at the helm but thoroughly enjoying the wait guessing other peoples concepts.

Everyone I've played Concept with has motioned it to me sometime after, whether its to ask about playing again or reminiscing on a fun evening. Its massively replayable too of course, as there are a lot of cards with 9 concepts each on them. Beyond that, there's nothing stopping players thinking of their own in the vein of Charades. It shares elements of games such as Dixit in its symbolism and communication elements, and how engaging it is for every player regardless of whose turn it is.

Altogether, Concept is an enormously fun, engaging game designed for any player count or skill level that would be at home on anyone's shelf. Moreover, Repos Production have produced another classic!