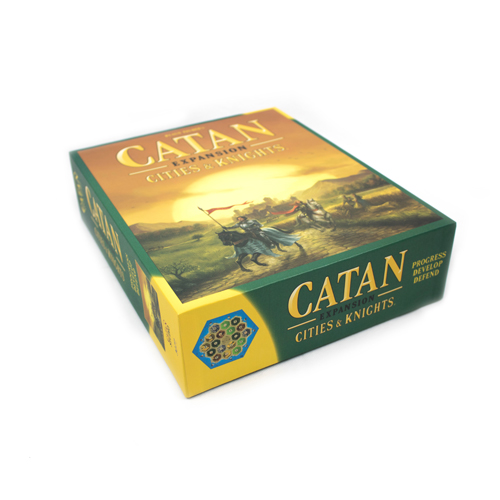 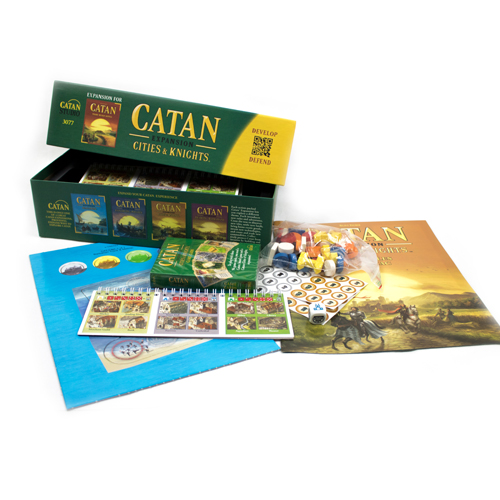 Dark clouds gather over the once peaceful landscape. Wild barbarians, lured by Catan’s wealth and power, manoeuvre to attack. Their massive warships loom against the orange horizon.You must be strong Barbarians attack the weakest targets, and the victim of their onslaught will be the player who contributes the least to the defense of Catan. Don’t take any chances Field y…
Read More
Category Board Games Tags Catan, Klaus Teuber, Mayfair Games, Podcast Approved SKU ZBG-MFG3077 Availability 5+ in stock
Share
Share this

Catan: Cities & Knights is an expansion for Catan, the classic board game by Klaus Teuber. You’ll need the base game of Catan to play. A lot of modules and additions come in this expansion. It’s an ideal next step if you can’t get enough of the island of Catan. You can combine Cities & Knights with another Catan expansion, Seafarers, for a giant game.

The core mechanisms remain from the base game. The slogan on the original Catan box reads ‘Trade, Build, Settle’. In Catan: Cities & Knights, this slogan is different. Now it’s ‘Progress, Develop, Defend’…

Players begin with one city, already. Cities are important in this expansion! They can even become a metropolis (worth 4VP). Cities produce new, additional resources: paper, cloth or coins. Cities next to forest, meadow and mountain hexes provide these, respectively. These new resources are key components to building a range of new constructions. There’s no mere single player aid, any more. Cities & Knights provides you with a trio of flip charts.

These charts allow you to build ever-increasing improvements to your cities. As you build more, you roll the Event Die. The better your improvements, the better chance you have of getting free Progress Cards. (These replace the Development Cards.) One face on the Event Die is that of the barbarians, whose ship sails ever-closer to the island…

Yes, the barbarian horde are coming! You can pay for trained knights to join your road networks for added protection. (Knights help scare the robber away, too!) Once the black ship arrives, the players have to fight off the barbarians using their knights. If they succeed, the player who contributed the most knights gets the Defender of Catan card (1VP). If the players fail, the one who contributed the fewest knights takes a hit. The barbarians sack one of their cities, reducing it back down to a settlement!

Catan: Cities & Knights takes the base game of Catan and ratchets it up a notch or two. This is a perfect addition to fans of the base game!