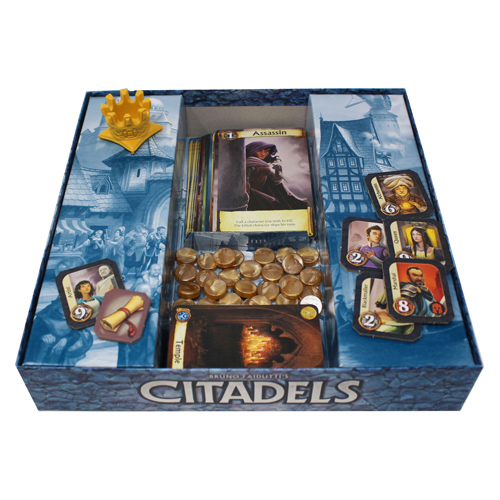 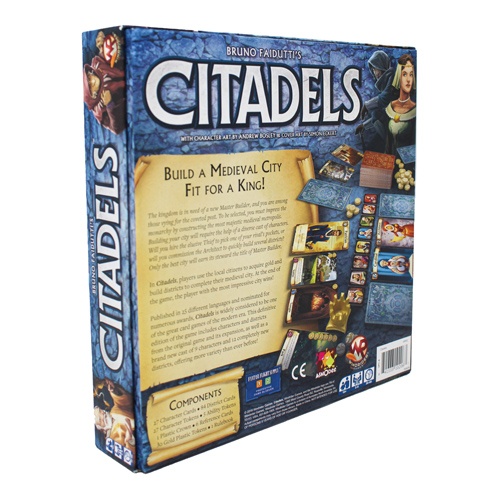 In Citadels, players take on new roles each round to represent characters they hire in order to help them acquire gold and erect buildings. The game ends at the close of a round in which a player erects their eighth building. Players then tally their points, and the player with the highest score wins. The 2016 edition of Citadels includes twenty-seven characters — eight from the o…
Read More
Category Board Games Tags Best Sellers, Bruno Faidutti, Citadels, Fantasy Flight Games, Golden Pear SKU ZBG-FFGWR02 Availability Restock Expected
Share
Share this
80%

In Citadels, players take on new roles each round to represent characters they hire in order to help them acquire gold and erect buildings. The game ends at the close of a round in which a player erects their eighth building. Players then tally their points, and the player with the highest score wins.

The 2016 edition of Citadels includes twenty-seven characters — eight from the original Citadels, ten from the Dark City expansion, and nine new ones — along with thirty unique building districts, and the rulebook includes six preset lists of characters and districts beyond the starter list, each crafted to encourage a different style and intensity of gameplay.

Compete to become the kingdom's next master builder; enlist help from the game's characters and collect gold to see your city take shape. You must deceive, betray and bluff your fellow builders if you are to create the kingdom's most impressive city and be crowned master builder.

Citadels is a strategy-based card game that is designed to be played with two to eight players. It is recommended for players aged 10 and above and the box suggests the game should take between 30 minutes and an hour.

The History of Citadels

First released in the year 2000, Citadels was widely considered to be one of the best card/strategy games on the market. It was so well received, in fact, that an expansion quickly followed. 16 years on and this definitive edition includes some elements of the original game and expansion, as well as introducing nine exciting new characters and twelve brand new unique districts.

Each player begins the game with four district cards and two gold. The oldest player takes the crown at the start and will be the first to play the role of King. Starting with the King, each player takes a turn to secretly choose a character that best suits their playing strategy for that round.

Depending on your preferred strategy you might like to choose the Assassin so you can execute a formidable character, or maybe you would rather just steal gold from them and therefore pick the Thief. If sabotage is not for you, maybe you would choose the Architect or the Merchant and gain extra resources.

Choose wisely, each character has different abilities and it's your job to pick the character that will best suit your strategy, whilst foiling your rival's strategy at the same time. Once you have chosen your character for this round the remaining cards are passed to the left for the next player to select from, and so on, until all the players have a character. The first round can then begin.

Order of play is now determined by your chosen character. It is the king's job to call the characters to take their turns in the proper order, as indicated by the character's rank. When your character is called you must reveal your character's card, (unless you have been assassinated) and your turn begins.

If applicable, you may now use your character's special ability, whatever that is, before you proceed to the main part of your turn. Here you may gather resources and you have a choice to take gold or choose a new district card. Then, finally, you may build a district in your city by paying the districts build cost in gold.

Once all the characters have been called the round ends and the character cards are collected up ready for the next round. The game ends at the end of the round in which the first player builds their seventh district and completes their city (eight districts are required for two or three player games). After the last player has had their turn it is time to total up and the builder with the highest points score wins.

There are a few ways to earn points but most of your points will come from adding up the build cost of each completed district. Extra points can be gained by building in all five districts and being the first to complete your city will also earn you a bonus. Unique districts have special powers that earn extra points too, so don't forget to check them at the end of the game.

The rules are really easy to pick-up and once we had completed our first round we all pretty much knew what we were doing. Having played Citadels in small and large groups, I can say the game plays well either way, although in larger groups it is easy to get distracted while the rest of the players take their turns, especially if you have a couple of very strategic players in your group.

The box recommends that the game came be played in 30-60 minutes, we have yet to play a game within this time frame but I do think it is possible. In terms of replay-ability, there are lots of possible characters to choose from, and many different strategies you could adopt, so this is definitely a game that could be played over and over.

Citadels is an easy game to teach too, making it a perfect game to choose if you want to introduce new players.