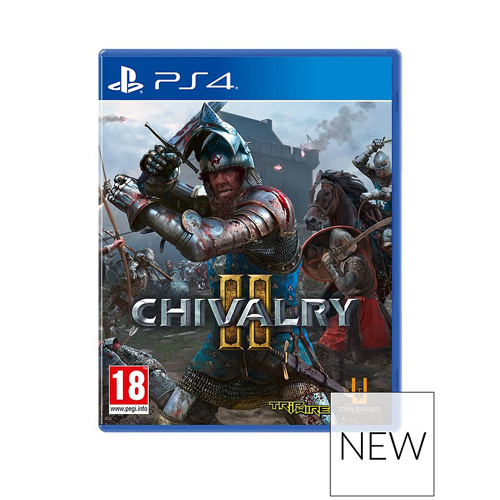 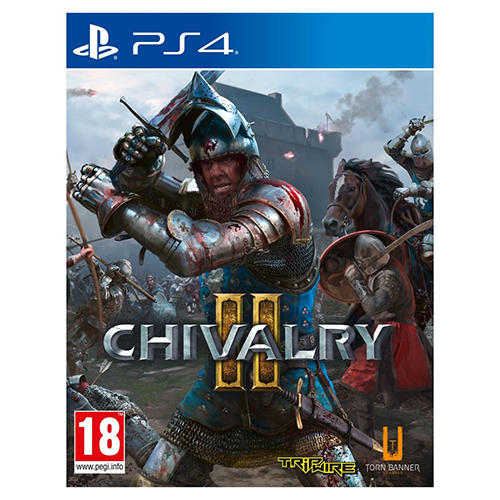 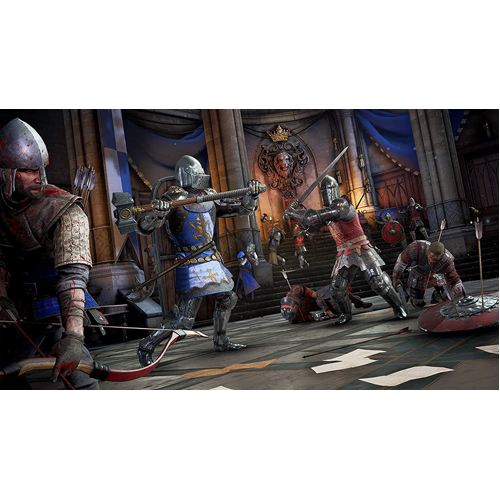 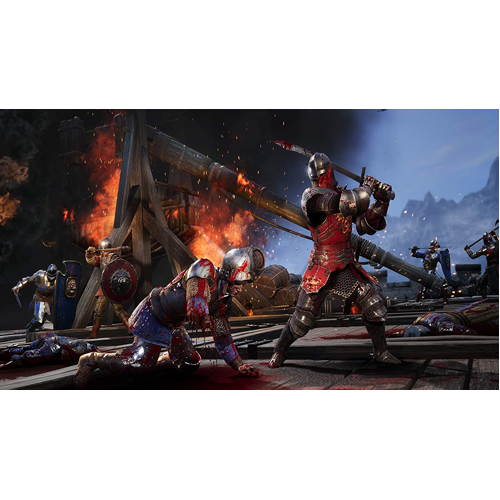 Pay in 3 interest-free payments on eligible purchases. Learn more
Success! We will let you know when this product is available again.
Your email address has been unsubscribed!
Your email address has been unsubscribed!
Notify me when this product is available to purchase!
This email address is already subscribed to this product!
Chivalry II is a multiplayer first-person slasher inspired by epic medieval movie battles. Players are thrust into the action of every iconic moment of the era from clashing swords, to storms of flaming arrows, sprawling castle sieges, and more. Dominate massive battlefields. Catapults tear the earth apart as you lay siege to castles, set fire to villages, and slaughter filthy peasa…
Read More
Category Video Games Tags Fighting Video Games, PS4, Software, Tripwire Interactive, Zatu Gold Award SKU VKM-DESA44.UK.22ST Availability Out of stock
Share
Share this
84%

Chivalry II is a multiplayer first-person slasher inspired by epic medieval movie battles. Players are thrust into the action of every iconic moment of the era from clashing swords, to storms of flaming arrows, sprawling castle sieges, and more. Dominate massive battlefields. Catapults tear the earth apart as you lay siege to castles, set fire to villages, and slaughter filthy peasants in the return of Team Objective maps.

Experience the Next Era of Melee Combat: Master the blade with an all-new combat flow that combines our real-time strikes and free-flowing combo system to speed up the action and let players become a whirlwind of steel on the battlefield. Created with the ability to fight multiple foes in mind, Chivalry II combat mixes the best of both FPS and Fighting game genres for an unmatched melee experience.

Chivalry II is the follow up to Chivalry (no surprise there) and is a first/third-person PvP battler - sort of Call of Duty for the Middle Ages. As such it is part of a fairly niche genre and sits alongside older games like Mordhau and For Honor but for me it tops the chart with a blend of accessibility, gore and humour - a video game of Monty Python and the Holy Grail crossed with Joan of Arc.

I'm a history teacher - and a mediaevalist at that, so Chivalry II was always going to pique my interest. That said I have spent many an hour shouting at the television while watching historical films and railing against their inaccuracy (sad, I know). So maybe this wasn't going to get a completely free ride.

Chivalry has all of the features you'd expect in a PvP battler. There are multiple classes: 4 main classes each with three sub-classes, which are unlocked as you level.  Each of these has a different balance of stats: speed, health and stamina; also a different array of weapons, some uniques others shared across classes. The Archer is as you'd expect: you get a longbow, crossbow and javelins with unlocks.

The Vanguard is high speed, heavy-hitting and lower health, with a tendency for massive two-handers. The Footman is an all-rounder and has a mix of loadouts: polearms, 1 hand and shield and an engineer with a sledgehammer. The knight has the greatest health and tends to 1 hand and a larger shield, but with some 2 hand picks. The asymmetry is very much evident in the gameplay, and as well as stats and weapon loadout being differentiators, each class has a different special on cooldown. These are a mix of different heal effects, obstacles and traps and they add more flavour to play.

There are two play main modes to choose from; a free for all or a team-based objective match (with either 40 or 64 players). Both are fantastic in their own ways. The team-based games put you as one of the two factions: Agatha (goodies) or Mason (baddies). You then play a scenario similar to Rush on the Battlefield games. You have an amount of time to achieve certain objectives which unlock sequentially. These include occupying an area, looting, breaking some scenery or killing an NPC. They are wrapped in a mini-narrative and string together well, generally being effectively balanced with only a few stages of certain maps currently feeling rather biased. I like the blend of melee and objective fulfilment. The character specials all play a bigger role and at times there is a genuine feeling of teamwork.

The Clash of Arms

I thought the free for all would be terrible. Actually, it tends to give you a better combat experience if you want one on ones. Why? Well, there are fewer pile-ons as large factional gangs push on an objective, which does happen in the team games. Certainly, there are plenty of times when you get blindsided, but often you get some good bouts of two or three players squaring up. And as it's a first to X kills not a battle royale, you are thrown back into the thick pretty quickly once you get cut down.

Which takes us on to the combat experience itself. Definitely not an attempt to be super realistic but a layered approach to difficulty. At first, you will be mastering the four different basic strikes: overhead, stab, slash and special. All have different characteristics beyond direction, as damage, range and speed vary.

On the other hand, you'll be trying to block and manage your stamina, while starting to experiment with parry-riposte and counter attacks: two ways to avoid damage and come back at your enemy. From there you'll start to learn to interrupt blocking with kicks and attacks with a jab. You'll get better at fancy footwork to avoid being hit and or attack an opponent from an angle that's hard to block. You'll start to feint, to mess with other players who are becoming more advanced. Then you'll start to mix it up by throwing your weapon occasionally or using tackle/sprint attacks.

From the outset, you will get kills. You are also going to lose a lot of limbs in the process. Equally, as you get better your K:D will improve. I haven't seen many with the top tied K:Ds of Apex. This game certainly doesn't take itself too seriously: after all, you can pick up bread, fish and severed heard and lob them at enemies. I have heard you can also set light to chickens and lob them at your enemies.

Chivalry II, like many in the wider genre, also embraces the 'dress your dolly' fixation with skins. You have different skins for each main class in both of the two factions and the free for all. The unlock for these is either in-game gold earned through levelling or purchased coin - while I find the latter fairly offensive in a paid game, the good news is that there are no exclusives that can only be bought with real money and the in-game gold comes in at a fair rate and allows you some skin buying pretty regularly if that floats your boat.

So do I have any quibbles? Only a few and they are pretty minor. I'd like a better practice mode or small skirmish mode: 3v3 for example. The tutorial is an effective linear affair but it has limited actual combat. Equally the offline bot fights are far too easy. Free for all is good fun, but I'd like a bridge into improving your skills with some more contained fights.

The other main one is I really want the ability to remap the controls. They are mapped pretty sensibly but there are a couple of inelegancies, particularly with strikes on the shoulder buttons for PS4 and kick on Circle. I have a way around with back buttons, but it could be a real pain without.

These aside, I am really enjoying Chivalry II. It's pacey, gory, skilled and, at times, laugh out loud funny. It's a historical hodge-podge but none the worse for it. Only history geeks like me will notice and I really don't care. Most importantly when you fight, it really does give a sense of swinging around a blooming great hunk of sharp/blunt/spiky metal!

I am feeling a sense of progression in my fighting technique and I am enjoying the gradual unlocks of weapons and sub-classes. I have already got my money's worth from it and it still hasn't outstayed its welcome. For real longevity, I think it will need some more maps and modes. Hopefully, those will come - there is a Trello dev roadmap that looks encouraging. I would strongly recommend Chivalry II and I can see it getting a fair bit more intense play and then being a regular I come back to again and again.