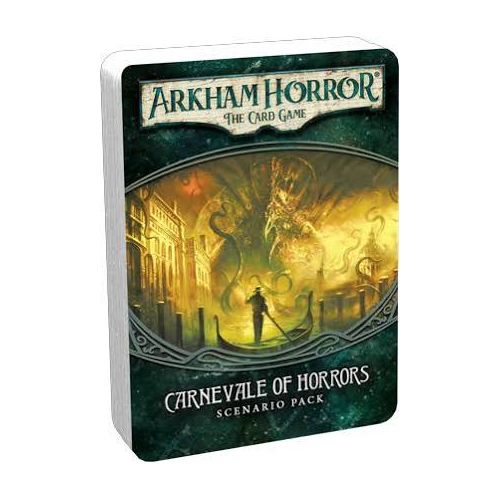 you could earn 1266 victory points

you could earn 1266 victory points

Arkham Horror: The Card Game is a cooperative game for up to two players (or four, with two core sets). Set within the fictional world of H P Lovecraft’s Cthulhu Mythos, players will each take on the role of an investigator. Each investigator is unique, with their own set of skills, strengths and weaknesses, represented a deck of cards. The game is played by completing a numbe…
Read More
Category Board Games Tags Arkham Horror LCG, Fantasy Flight Games, Halloween, Living Card Game, Platinum, Stunning Artwork, Value For Money SKU ZBG-FFGAHC10 Availability Restock Expected
Share this
92% 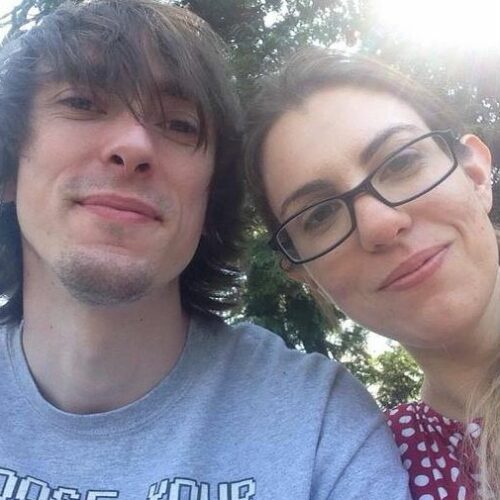 The game is played by completing a number of adventures; individual scenarios that combine to form a campaign. As players progress through a campaign, and purchase new expansions, they will have the opportunity to customise their investigator decks. This will enable them to tweak the gameplay to their personal preferences, and better equip themselves against challenges thrown up by the game.

Carnevale of Horrors is a 62 card self contained scenario, that can be played as a standalone campaign. It can also be inserted into another campaign, as side quest for your investigators.

The city of Venice has given itself up to the fun and merriment of the carnival. However, masked conspirators move amongst the crowds, using the cover to set in motion a sinister plan. Cultists work to bring forth an ancient one. Screams erupt throughout the city as the sun gives way to night. Something stirs in the lagoon. Your investigators must unmask the cultists before the innocent are sacrificed, and the being that stirs beneath the water, awakens.

This is an expansion. To play Carnevale of Horrors, you will require a copy of Arkham Horror the Card Game.

Come on in here, investigators. After a harrowing few nights tearing down a ghoul god-worshipping cult in Arkham Horror: The Card Game’s core campaign and hunting an honest-to-Cthulhu werewolf across the Louisiana bayous in Curse of the Rougarou, I’d say you’ve earned yourselves a holiday. Fortunately, Carnevale of Horrors is offering you just that: an all expenses paid cruise to a street party in beautiful Venice, Italy!

Sample the wine, shovel down some pasta- what’s that? Oh, the name’s bothering you, I see. Well, there’s a reason the tickets were cheap, investigator. Don’t worry! I’m sure they’ll be, y’know… minor horrors. Like insufficient parking and, uh… some sort of convoluted wristband system for the rides.

Alas, You Will Beg For a Convoluted Wristband System

Venice is a city of two distinct faces. A stunning labyrinth of winding canals, cobbled streets and spectacular architecture. An amphibious sewage-infested urban nightmare that stinks to high heaven whenever it floods. You’ll come to know both of these well as you traverse La Serenissima in Carnevale of Horrors. Your investigators will be taking in famous sights such as the San Marco Basilica and the Bridge of Sighs.

An unsettling killing in Boston leads you across the ocean to the annual Carnevale di Venezia celebrations in Italy. The murderous servants of the sea fiend Cnidathqua hide amongst the masked revellers. With the assistance of the Abbess Allegria Di Biase, you’ll rescue as many innocent party-goers as you can. This is all before the sect plunges Venice into chaos and unleashes their eldritch doomsday weapon. 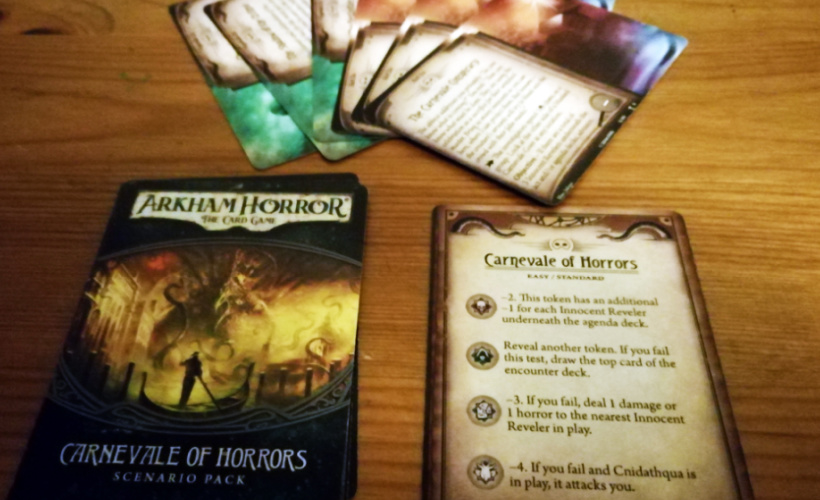 The Circle of (Endangered) Life

Carnevale of Horrors is the second adventure to expand Arkham Horror: TCG. It follows the excellent Curse of the Rougarou. Whilst it may not have its predecessor’s gruelling level of difficulty and sense of dread, it is as close to unapologetic fun as the series will get for a long time.

Sorcerers erupt from the stampeding crowds to duel you to the death! Writhing appendages tear through the canals,  searching for prey to drag to the depths!

A hulking zealot in disguise hunts you through the streets, squares and gardens. And that, my sanity-dwindled sleuths, is just the first act!

Moreover, this standalone escapade is also the first in the series to attempt something truly interesting with Arkham Horror’s location set-up. In opposition to the open plan playing areas, Carnevale of Horrors arranges eight location cards in a circle. They can only be moved in a clockwise direction. This simulates the surging crowds pushing through the narrow alleys and walkways.

At the beginning of the scenario, a special Masked Carnevale-Goer card is dealt to seven of these locations. Each has a concealed identity on their reverse side. Three of them hide the innocent civilians that you’re trying to escort to safety. The other four cloak high-ranking members of Cnidathqua’s order. They will immediately attack you upon their discovery.

The one-way circular layout of Venice can both cleverly help and hinder you here. Pursuing hunters may have their route options strangled as they chase you. A bad turn of luck with the chaos tokens may force your investigator to move on from a location before they’re ready. This ensures another full trip around the waterways! 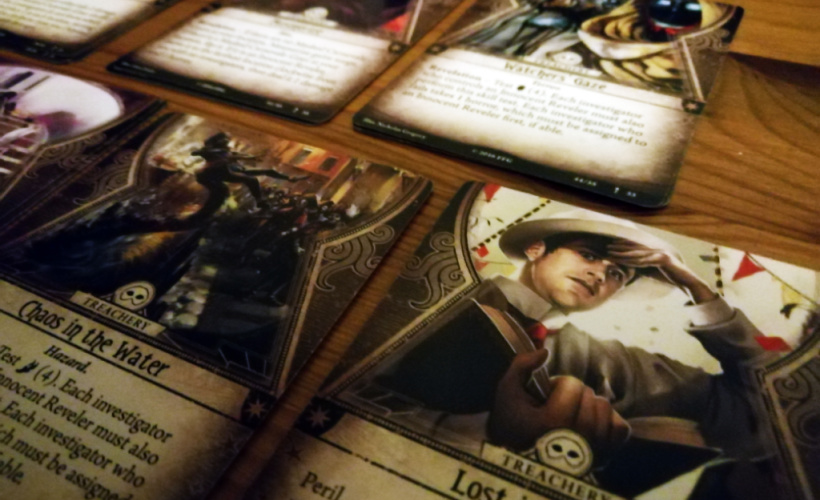 Of course, this is Arkham Horror and even the greenest investigator will quickly learn that whenever this game appears to be extending a helping hand, its other one is grasping around for something sharp to jam through your ribcage. Carnevale of Horrors’ encounter deck is comprised of vicious treacheries and enemies designed to disorientate you and pry those innocent revellers out of your hands.

Therefore, these cards range from minor irritations like the gondola-riding Poleman to more troubling punishments such as Abduction.

Others are just plain aggravating. For the price of a clue, you have the option to peek at the identity of a Masked Carnevale-Goer, sparing you an unwanted showdown with a hidden undesirable. Imagine spending those hard-earned clues on this seemingly wise venture, only to have it mockingly thrown back in your face by Mass Hysteria. A treachery that forces you to take all the Masked Carnevale-Goers, jumble them up and relocate them back around Venice. 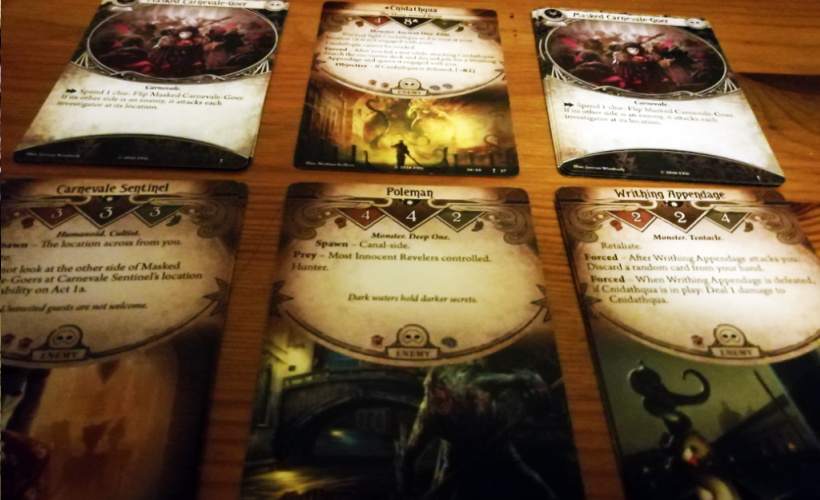 Despite its filthy tricks, I found (and continue to find) Carnevale of Horrors to be my go-to scenario for recruiting new players into the world of Arkham Horror: TCG. Its theming is outstanding and that artwork that drives it is as beautiful and involving as has become the par for every new entry in this game’s canon.

Narratively, it moves quickly and of its own accord; by the time you’re about to get sick of the Carnevale-Goers being switched around before your eyes like a ball and cup sideshow, the game will automatically spawn Cnidathqua for one of the most memorable climaxes of any scenario in the series.

I really only have a couple of minor complaints. First, print on demand quality cards. Not great. Will not look or feel good when mixed in with any non-standalone packs. Sleeve immediately. Problem solved.

In the second campiagn mode, quite a few leaps are made in terms of the narrative. If you can justify to yourself how an investigator manages to leap from Massachusetts to Italy in between two scenarios that are otherwise linked by a single night as demonstrated in the core Night of the Zealot campaign.

From a practical standpoint, I’m not a fan of having to pay experience points to play these standalones halfway through an existing campaign either. Carnevale of Horrors costs an obscene 3XP per investigator to embark upon which is a lot to pay for an adventure that is more than likely going to leave you worse off at the end of it. 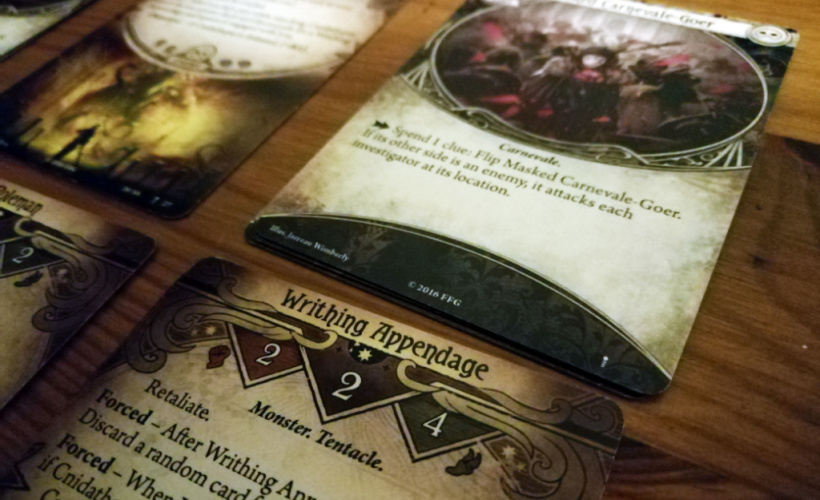 This game is easier to finish than Curse of the Rougarou or the last half of the core campaign. Carnevale of Horrors has a mean chaos token set-up that would penalise the marrow from your bones if it could. You’ll most likely end up with a permanent new weakness in your deck come the finale.

Again, my thoughts are of nibble-sized quibbles among a feast of horror-fried excellence. If you’re digging on the Arkham Horror: TCG core set and you’re looking to take this relationship to the next level, pack your stuff into a cardboard box and move on in with Carnevale of Horrors. Venice is one of the world’s most romantic cities, after all… no matter how many octopus-limbed terror gods are floating in it.