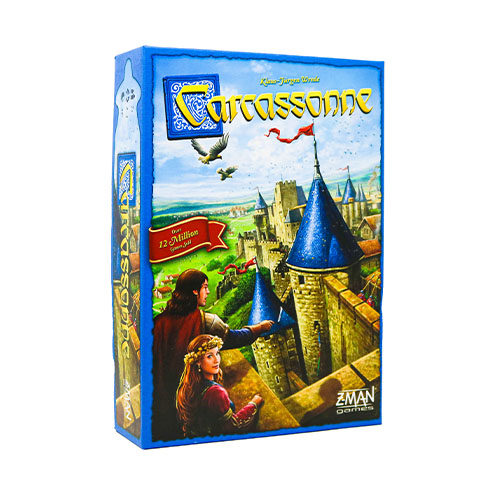 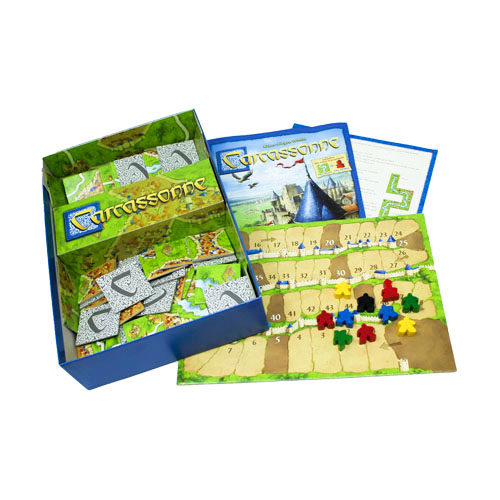 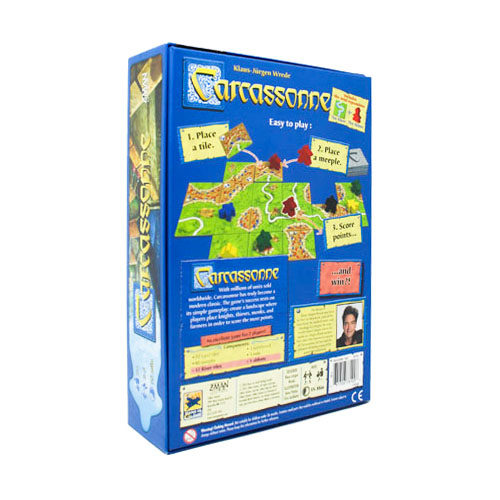 you could earn 2486 victory points

you could earn 2486 victory points

Add to Wishlist
Transport yourself to the old, medieval, hilltop town of Carcassonne, in this tile and worker placement game that has become an absolute staple of the board game world. Carcassonne is a game, suitable for 2-5 players, which sees players selecting a face-down tile from the centre of the table, and placing it to continue the landscape of the already-placed tiles on the table. This is …
Read More
Category Board Games Tags Best Sellers, Carcassonne, Dice Tower, Gold, Golden Pear, Great For Two, Great Gifts, Podcast Approved, Podcast Episode 12, Podcast Episode 13, Z-Man Games SKU ZBG-ZMG78100 Availability 5+ in stock
Share this
85%

Transport yourself to the old, medieval, hilltop town of Carcassonne in this tile and worker placement game that has become an absolute staple of the board game world.

Carcassonne is a game suitable for 2-5 players, which sees players selecting a face-down tile from the centre of the table and placing it to continue the landscape of the already-placed tiles on the table. This is the one key rule in Carcassonne. Roads must continue roads, castles must continue castles; you cannot cut off a feature. Then comes the key decision, do you place a meeple on one of the available features on that tile, that feature being anything from a road to a monastery? Or do you keep hold of your meeples and await another placement opportunity that may yield more points?

This dilemma is had by all who play Carcassonne and it is what makes this game so fiendishly fun. While the artwork and the general theme may be quaint and friendly, it is you, the player, who can turn that image around and become rather militant in your tile placing antics!

You may see that a player is about to complete a castle feature and score a respectable eight points. However, you see an opportunity to steal said feature and end up placing tiles away from the feature, joining it up and stealing it from right under their noses, as you will have placed more meeples on that feature than them! This is just one of the many strategies one can employ while playing Carcassonne and it is something that sets this game apart.

With its simple yet rich game mechanics and eighty-four tiles that can be configured into numerous combinations, Carcassonne appeals to beginners and veteran gamers alike. This edition is entirely redesigned and modernised and includes two expansions: The River and The Abbot. This easy-to-play, fast-paced, family-friendly game encompasses everything good about board gaming and will give you an experience you will cherish for many games to come!

Carcassonne is a tile placement and area control game designed by Klaus-Jürgen Wrede and was released in 2000. It was the Spiel des Jahres winner in 2001 and has been nominated for and won several other awards and accolades since being published.

It has earned its place in many board game collections and has served as a gateway game for many non-gamers. Since its launch there have been many expansions to the base game that add various new tiles and gameplay. Carcassonne plays with 2-5 players in under 45 minutes, with simple gameplay and quick turns.

In Carcassonne players are creating, tile by tile, an ever-expanding section of southern France. These tiles can depict a combination of cities, roads, cloisters and grasslands. Each player has a number of meeples that can be placed on the tile to score points. Depending on the piece of landscape that the meeple is placed victory points are scored in different ways.

The set-up of the game is simple, place the starting tile face up in the middle of the play area. Place the remaining game tiles face down to the side and give every player a set of meeples.

On a player’s turn a tile is drawn from the face down stack at random. This tile must then be placed next to an already existing tile following a simple set of rules, i.e. roads connected to roads, cities connected to cities, grasslands connected to grasslands and so on. Once the tile has been placed the player can choose to place a meeple on that tile. Depending on the type of landscape a player placed their meeple will depend on how they score.

A meeple is classed as a knight when placed on a city space, a thief on a road, a monk on a cloister and a farmer on grasslands. The knight, thief and monk stay on the board until their respective area is completed, at which point they score victory points and are returned to the player to be used on subsequent turns.

Cities are completed once it is surround by walls and there are no gaps inside the city. Knights score two points per city tile or four points if the city tile displays a shield. Roads are completed when it has a start and end location represented by either a village or city or if the road connects to itself forming a loop. The thief scores one point for each tile that makes up the road. Once a cloister is surrounded by eight other tiles the monk scores nine victory points.

Farmers work slightly differently to the knight, thief and monk as they stay on the board until the end of game and contribute to final scoring. The farmers make up the area control aspect of Carcassonne. As with the other meeples, only one farmer can be placed on connected grasslands at any one time. A field can consist of any number of continues grassland spaces that are not separated by roads or cities. At the end of the game each completed city that a farmer is connected to scores three victory points. 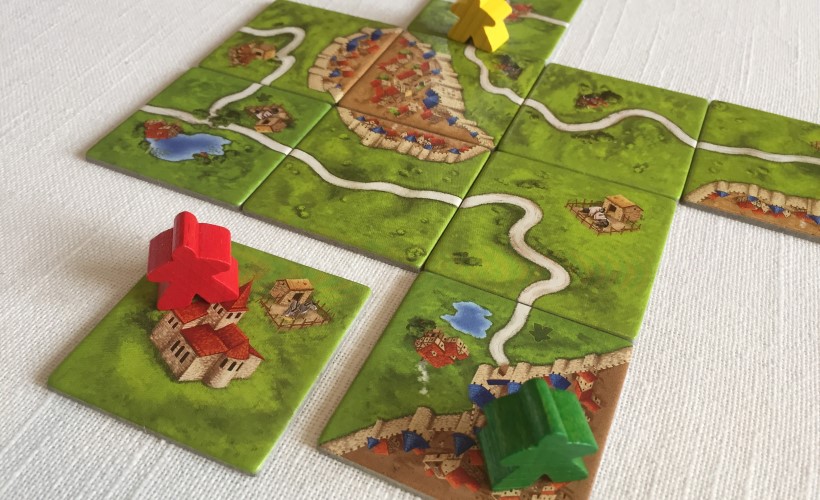 Play continues this way until all the tiles have been used. Each player adds to the same growing map and only one meeple can be added to any section of landscape at any one time. The dilemma comes when placing the meeple on the tile. As a player only has a limited number of meeples they can soon start to run short. The knight, thief and monk are not returned until the area is complete and farmers stay on the board until the end of the game. A player can go for quick points by completing roads, cities and cloisters or go for a more long-term strategy with farmers.

Although only one meeple can be placed on a location at any time, with clever placement of tiles players can compete for points on the same location. For example, one player can start a city and place a knight in it. Another player can start a second unconnected city also containing a knight. If these two cities become connected then the final completed city may contain knights from more than one player. The player with the most meeples at the point of completion will score the points.

This is the same for the thief and farmer. The competition of farmers can be serious as some big points can be gained by having the most farmers in the field, especially if the field is connected to many castles. Many games of Carcassonne are played trying to compete for the majority in farmers. There can be more than one field in the game as they can be segregated by placing roads and cities, effectively cutting off fields from other areas in the game.

Carcassonne holds a special place in my gaming collection. I remember playing Carcassonne with a friend of mine before my interest in board games grew to what it is today. It holds a certain nostalgic value for me. The gameplay is smooth and simple; pick a tile, lay a tile, place a meeple. The rules are simple and easy to understand, the downtime between turns is minimal, even at the higher player counts and the game can play quickly.

Despite its minimal components and simple gameplay, the game offers some tough tactical and strategic decisions balancing short terms victory points with end game victory points. Each turn a player only gets a single tile and they need to place that tile to optimise every move. This is what I like about the game. There is not a complicated turn order with multiple options. There is a single randomly drawn tile and the player working out the best possible place to lay it.

The competition for farmers can be fierce and can often mean the difference between winning and losing. For new people to the game, the significance of farmers might be lost if they are not fully explained. The fact that that farmers are not returned once they are played means that placement of a players meeple is critical. Is it worth placing this thief now for a few quick points, or keeping hold of it until the right tile comes up to win the farmer majority? Is it worth placing a knight in this castle now hoping that I can complete the castle quickly and get my meeple back? Should I place a farmer here and lose a meeple for the rest of the game to secure my majority? These are all the type of questions that go through your head when playing.

The game has huge replay-ability. Yes, the tiles are the same but the order they come out and where they are placed will create a unique map and landscape to play on each time. At the end of the game I often sit back and admire the little piece of southern France that has been created. In addition, there are several expansions that add additional tiles and new meeples to the original Carcassonne game. This further increases the replay-ability of the game and adds a lot of variety in to which sets are played with.