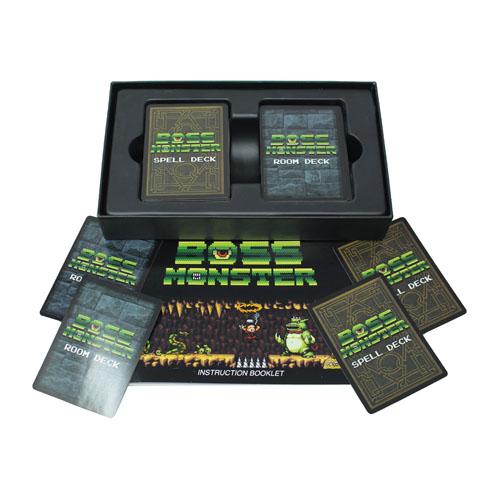 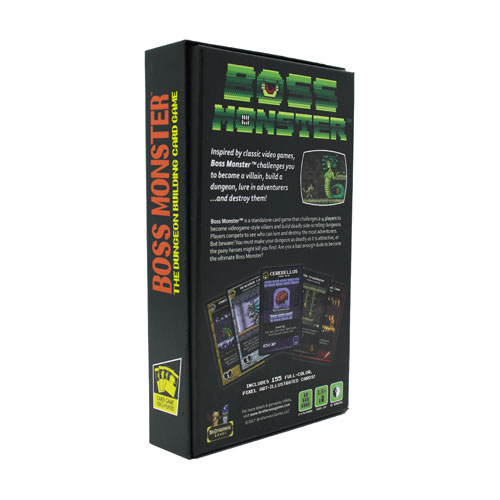 Inspired by a love of classic video games, Boss Monster: The Dungeon Building Card Game pits 2-4 players in a competition to build the ultimate side-scrolling dungeon. Players compete to lure and destroy hapless adventurers, racing to outbid one another to see who can build the most enticing, treasure-filled dungeon. The goal of Boss Monster is to be the first Boss to amass ten Souls, which are gained when a Hero is lured and defeated — but a player can lose if his Boss takes five Wounds from Heroes who survive his dungeon.

Playing Boss Monster requires you to juggle two competing priorities: the need to lure Heroes at a faster rate than your opponents, and the need to kill those Heroes before they reach your Boss. Players can build one room per turn, each with its own damage and treasure value. More attractive rooms tend to deal less damage, so a Boss who is too greedy can become inundated with deadly Heroes.

Players interact with each other by building rooms and playing Spells. Because different Heroes seek different treasure types, and rooms are built simultaneously (played face down, then revealed), this means that every "build phase" is a bidding war. Spells are instant-speed effects that can give players advantages or disrupt opponents.

As a standalone card game with 155 cards, Boss Monster contains everything that 2-4 players need to play.

Boss Monster flips the typical and clichéd narrative of heroes vanquishing monster at the end of a perilous dungeons and makes YOU the Boss Monster.  You'll be building trap rooms, monster hatcheries, and haunted libraries etc, in an attempt to save your scaly and monstrous hide from a range of would-be heroes.

If that doesn't already sound like fun, you'll be playing this game in a wonderfully retro homage to the 8-bit computer games of the eighties and nineties.

Your mission is simple; lure fabled heroes into your ever growing and increasingly dangerous dungeon to destroy them. The Boss Monster who collects 10 hero's souls first is declared the winner, and boss among bosses.

Alternatively, the last Boss left standing wins if any Heroes are able to penetrate you're almost death-trap and score five wounds.

Boss Monster presents a wonderful merging of theme and mechanics in this quick and light game of tableau and pattern building, harking back to the late eighties and early nineties video games like Super Mario Brothers, with its replication of side-scrolling dungeon exploration, and monster crushing.

Dungeons are made up of a maximum of five Dungeon Room cards, each of which will carry with it a damage value, a treasure type and special rule.

Each turn players may add another room to their dungeon that can be at the end of the tableau of cards or layering a card over an existing one. In this way players can adjust the damage and special effects of cards, chaining them together for maximum effect.

This will also allow players to attract (or repel) the various Heroes that appear in town each turn. With four different types of hero with their own treasure preference; fighters like fighting, thieves like gold and so on.

On the surface, Boss Monster is a very simple game, you have only one build action per turn and your choice of that action extends as far as your hand of Dungeon Room cards. Equally, your dungeon is built with a very tight construct: only placing cards to the leftmost space or over an existing card.

Spell cards are another action that you can take and you can play any as many of these in a turn as you can afford to, with the simple limitation of being played during the build phase, or whilst an adventurer is in a dungeon (Adventurer Phase). Unlike Dungeon Room cards, Spell cards aren't drawn each round, and getting more of these very useful cards will require particular room effects.

All of this makes Boss Monster very, very easy to teach but it takes a lot longer to master.  You don't want to attract too many heroes too early, as there is a very good chance you'll end up taking wounds and getting knocked out of the game, but you also need to start building up your dungeon and this needs to be relative to your opponents.

If players are tied for the most gold, the Thieves wait in town until there is a clear leader, and since you can build over existing rooms you can use this ability to force bottle-necked heroes into your opponents dungeon when they are ill-equipped to deal with the onslaught - even better if you have a few nasty spells up your sleeve.

The limited actions do sometimes feel very limited, every now and then you can end up with a hand of dross - particularly in the later stages of the game or spells that won't have any worthwhile effects, so your hand becomes cluttered and full. This stagnation can be more frustrating if an opponent is running away with the lead.

The obvious solution to this comes in the form of expansions, of which there are many, adding more and new flavours and jokes to your games.

There is, I feel, a very fine balance between the direct and indirect player interaction that Boss Monster strikes.

The Spell cards introduce a clear Take-That aspect to the game yet none of them have a particularly nasty sting, so no one's fun is ruined solely by a spell.

Indirectly, good or experienced players will monitor and be aware of the dungeons around them, which heroes are being attracted, the room combinations that are particularly effective and so that you can plan and scheme your machinations of destruction by building your dungeon to conflict or contract with theirs.

Boss Monster is made up of a few simple decks of cards; Heroes, Dungeon Rooms, Bosses, and Spells, and the artwork, along with the iconography throughout is all simple and totally on theme; capturing the tone and feel of those 8-bit games.

When playing Boss Monster you cannot possibly forget you are playing a tabletop adaptation of those games and for many gamers who grew up with, and loved that era of gaming, Boss Monster will resonate with you immediately - and there is a fair chance you in fact already own this game. Younger gamers will still be impressed by its charm and the small flourishes and nods to fantasy works such as Jonny of the Evening Watch.

This game looks great on the table and it even looks great on the shelf with the lovely recreated pixelated art, theme and box. It's super quick, easy to pick up and play and understanding the finer points to the game's strategy all evolve at a good steady pace when you're all new to the game.

The luck of the draw can limit your choices when only playing with the core set, which also means that more experienced gamers may tire of this game after a few play-throughs. It is a very charming, fun small box game, one which you are unlikely to ever forget playing.