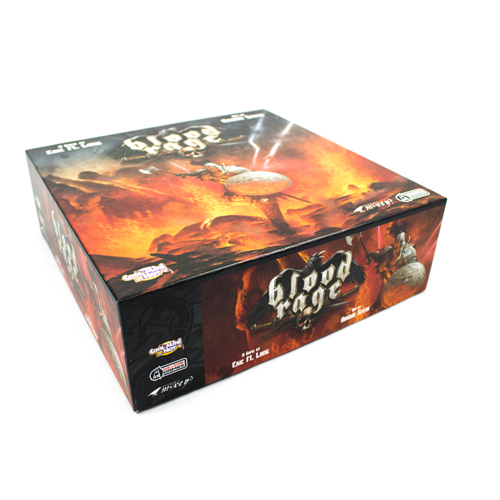 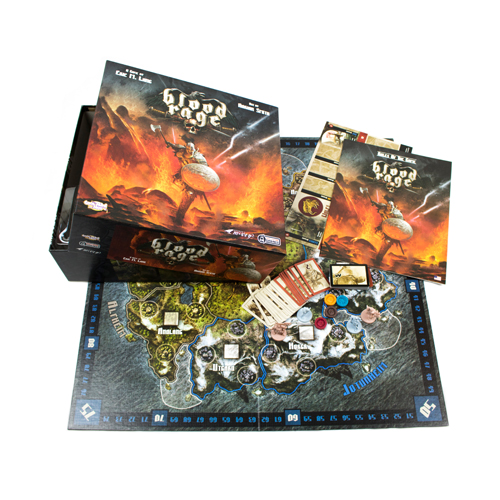 you could earn 6820 victory points

you could earn 6820 victory points

Blood Rage Coming from designing giant Eric Lang and CMON Blood Rage that’s place during Ragnarok as your vikings trying to secure as much glory as they can and secure a place at Odin’s side in Valhalla. The game comes with beautiful miniatures that represent your clan on the board and the various monsters and creatures inhabiting the land. Gameplay is led by card drafting as…
Read More
Categories Board Games, Miniatures Tags BGG Top 100, Blood Rage, CoolMiniOrNot, Eric M. Lang SKU ZBG-CMNBLR001 Availability Restock Expected
Share
Share this
85%

Coming from designing giant Eric Lang and CMON Blood Rage that’s place during Ragnarok as your vikings trying to secure as much glory as they can and secure a place at Odin’s side in Valhalla.

The game comes with beautiful miniatures that represent your clan on the board and the various monsters and creatures inhabiting the land. Gameplay is led by card drafting as players move through three ages (rounds). Cards will have a variety of effects including stats boosts, battle strategies, clan upgrades, access to those creatures mentioned earlier!

Cards will often be aligned with a norse god, giving clues about their use. These benefits are used in the area control portion of the game as you fight the other players for control of strategic areas of the board. Strength initially comes from the miniatures, but can be augmented by cards. This includes tricky cards that reward you for losing or punish your opponent for winning battles!

This means that you can engineer situations where you want to lose as your death will be rewarded with glory. All these elements combine to create an area control game that feels tense and exciting as you build towards the climax of Ragnarok. What makes this more so is the shrinking board as the effects of Ragnarok destroy regions one at a time. Of course you can use this to your advantage by leaving units in the doomed region to earn glory.

Dooming minis to Valhalla is not so bad though as they return to your player board at the end of the age. At the end of the game you will add glory earned through upgrades to your glory earned during the game. Blood rage plays up to four players but can be expanded up to five and other expansions add more elements into the game.

Eric Lang is one hell of a prolific designer. Not only has he had a hand in designing games like the Dice Masters series, Chaos in the Old World and Kaosball (chaos is perhaps the most recurring theme in Lang’s games), but he is also the designer of one of the most successful Kickstarter campaigns of all time in Rising Sun, a game that raised well over $900,000 in its first day and well over $2 million by the end of the campaign.

Moreover, he was only recently hired as Director of Game Design at Cool Mini or Not. Such success relies on a reputation for persistent quality. So, how did he develop such a reputation? It would be vastly incorrect to assume that only one game was responsible for all his success, however, it could most certainly be said that no other game contributed quite as much to his reputation as the phenomenally popular Blood Rage.

“It sates itself on the life-blood of fated men, paints red the powers' homes with crimson gore.” -Poetic Edda

Ragnarök has arrived, Midgard is being ripped asunder, all will perish and you must seek glory through battle before you arrive in Valhalla. You and your clan will call on the service of the gods for boons that will be the bane of your opponents as you battle and pillage the burning land. Through the strength of Tyr, the power of Thor, the grace of Frigga, the foresight of Heimdall, and the tricks of Loki you will command your troops and perhaps, even powerful monsters, to death and glory in what little time yet remains.

Blood Rage is a hybrid drafting and area control miniatures war game with beautiful components and a sleek, but open-ended rule set. Players will manage three stats to control their clan, Rage, Axes and Horns, engage in battles and perhaps even nefarious tactics to gain the most glory and the favour of Odin.

2-4 players start the game by selecting one of the four available clans. Each clan is mechanically identical, but each has a distinct aesthetic and all clans have entirely different sculpts, with a few different sculpts for each clan. Once you have selected your clan you will attach your colour coded bases to each figure, take the corresponding clan sheet and then you are ready to begin play.

These figures will be used to control territories, called provinces, on the huge board. One of these provinces is destroyed every Age of the game, and players are aware of which due to the ‘Doom’ marker placed randomly at the beginning of each age. The winner will be the player who has accrued the most ‘Glory’ points at the end of the game.

The game is divided into three rounds, called ‘Ages’. Each Age is composed of five phases:

How Does It Play?

The combination of drafting and area control is a unique one, or rather, it was at the time of this game’s release but now, a couple of years removed, we can see its influence in newer releases such as Matagot’s Inis, which is the only other game in my experience that bears any semblance to this design. If you know of any others please comment below!

The card-driven, deterministic combat has more in common with Cosmic Encounter and Days of Wonder’s Small World than it does Risk, which is most certainly a good thing. It’s a clean and easy to teach system, which is helpful, considering the myriad mechanics already present in the design. Not only that, but thematically, the combat has some brilliantly conceived ideas. This is a game whereby you can benefit by losing all your figures in combat with the powers of trickster-God, Loki. That’s right, losing is beneficial in some cases, so trying to live inside your opponent’s head is of paramount importance.

These are hallmarks of Lang’s design philosophy. He often stitches disparate mechanics together in a tapestry that looks like it shouldn’t work on paper, but somehow, he always manages to weld them together into a cohesive whole. His penchant for ‘ESP Games’ is quite apparent in this design also, something that he will no doubt iterate on in the spiritual successor to Blood Rage, the aforementioned Rising Sun, and there is a carefully crafted balance between this aspect of the game with the more mathematical concepts.

All of this makes for a game that is more rewarding with each play through, especially if played with a consistent group. The emergent strategies are so much fun to execute, and even more fun to explore, that you will be hard pushed to find a better board game about area control elsewhere.

Aesthetically, the game is astoundingly good looking. The layout of the clan sheets, the design of the map and the figurines are of the highest standard, the only downside to the design is the mini-sized cards, but hey, you can’t have it all, right? The monster miniatures* are especially glorious and are sure to pop your friends when you place them on the table, so that should more than make up for the mini card size.

Some of the models, however, smack of artwork from early 80’s Advanced Dungeons and Dragons 1st Edition. Chainmail bikinis and exposed midriffs are present in this box, and while you could argue that the male models are just as readily hyper-sexualised, it’s not a valid counter argument in this case.

Call me an SJW all you like, but personally, it breaks the psychology of the game world when these women are not dressed for war, particularly when they are not dressed as Viking women would be dressed for war. For all the care that has gone into curating faithful accuracy to Viking culture and sagas, it seems to stick out a little more than it should. If that has the potential to offend you, perhaps you should refrain from purchasing this one. However, I would warn you that you will be missing out on a wonderful design if you do so.

Blood Rage is an excellent game. It truly is, and herein you can see why Eric Lang is one of the most sought after designers working right now. There are few area control games that can match the depth of play in the time frame this game plays in. El Grande, is perhaps the only exception to this rule. There are few games (not by Cool Mini or Not) that can match its production values. Even less games can match the seamless stitching of so many mechanisms.

It is a masterful design, produced by a designer who seems to be coming into the prime of his design career. If you haven’t played this, and love the sound of participating in the blood-soaked battles of Ragnarök then you absolutely must buy and play this game.

*All of these beautiful miniatures were painted by Gail Gilchrist.