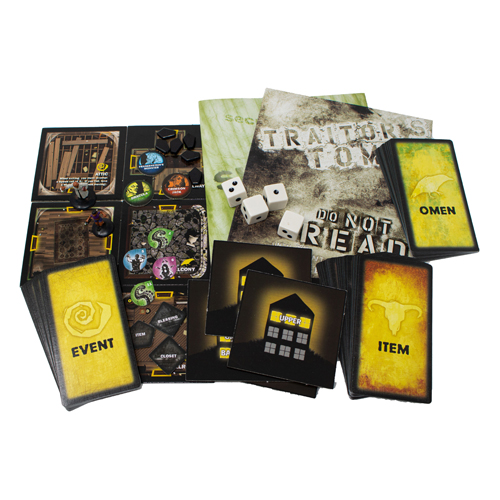 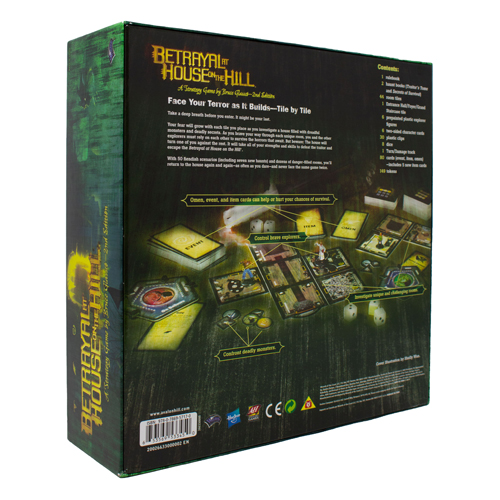 Betrayal at House on the Hill

you could earn 7079 victory points

you could earn 7079 victory points

In Betrayal at the House on the Hill, creaking floorboards, unsafe architecture and an ominously named “Pentagram Chamber” are not all you have to worry about. As you and your intrepid cohort scour this twisting mansion, choking smoke fills the air, deafening screams flood your mind and sinister spirits peel away from the walls. You scavenge weapons and trinkets for protection o…
Read More
Category Board Games Tags Best Sellers, Betrayal At House on the Hill, Bruce Glassco, Hasbro, Mike Selinker, Podcast Approved, Rob Daviau, Zatu Gold Award SKU ZBG-HAS266330000 Availability 5+ in stock
Share
Share this
80%

In Betrayal at the House on the Hill, creaking floorboards, unsafe architecture and an ominously named “Pentagram Chamber” are not all you have to worry about. As you and your intrepid cohort scour this twisting mansion, choking smoke fills the air, deafening screams flood your mind and sinister spirits peel away from the walls. You scavenge weapons and trinkets for protection only to be betrayed by one of your allies, whom you discover is embroiled in a classic horror plot.

Brought to you by Avalon Hill, this largely co-operative experience has you exploring a haunted house, which has each of its three floors built as you play. This procedurally generated board is the host of all manner of terrors, which can alter your stats and grant you items as you play. As you discover particularly creepy items, known as “Omens”, the game reaches closer to its crescendo, wherein a dice roll decides when the “Haunt” begins. It is at this point that main horror trope is triggered, typically controlled by one of your friends.

Each haunt is selected based on what the most recent omen was and where it was found. This can result in one of 50 different scenarios unfolding, with instructions for both the survivors and traitors in separate handbooks. Both sides have their own objectives and knowledge as to what is going on, but neither are aware of quite how much the other knows. Once one team has completed its goal, be that destroy the opposition, escape the walls of the house or bring a sacred item back to its resting place, the game is won.

The Betrayal at the House on the Hill game box contains six pre-painted, plastic explorer figures, each of which is paired with a two sided character card. These cards display two different sets of statistics per figure, for you to choose from, affecting both starting traits and progression. You’re also provided with 45 tiles to build the board, ensuring a wildly different layout each time you play, and 80 cards which depict the events, items and omen that your party may encounter on the way.

This title boasts simple rules, combined with massive replay-ability, making it a fantastic game to rope people into the hobby. For those more experienced, Betrayal at the Hill on the Hill is a great opportunity to let your hair down and have some good clean fun in a terrifying setting. If you find that you just can’t get enough of the game and demand more, plenty more waits for you in the Widow’s Walk Expansion.

Betrayal at House on the Hill is a strategy role-playing game, designed by Bruce Glassco and published by Avalon Hill Games (Wizards of the Coast). The game's first edition was released in 2004 (no longer in print) and the second edition was released in October 2010. The game has an expansion (released in October 2016) called Widows Walk, which does not change the core concept of the game but extends certain elements.

Betrayal at House on the Hill combines some of the tabletop's favourite mechanics; tile-laying, dice, traitor players, and miniatures, to create an atmosphere where the feeling of imminent disaster is always hanging over your head. Enter the mansion and see if you and your companions can escape with your sanity, and your humanity, intact...

The game consists of rule books (rule book, traitors tome and secrets of survival); 44 room tiles (to expand the mansion); a specific set of starting tiles; six miniatures and characters to represent players; eight dice; a turn counter; 13 omen cards; 22 item cards; 45 event cards; and a slew of tokens to represent unique circumstances within the game.

The components in Betrayal at House on the Hill are well made, and the miniatures are detailed. Some of the components seem overbearing and clunky but serve a purpose during the journey through the house. The artwork is thematic and contributes to the sense of fear while exploring the mansion.

To set up, each player selects a character card and chooses a side, before attaching plastic clips to indicate character values for their attributes. Character attributes are Might, Speed, Knowledge, and Sanity. The player also takes the miniature to represent their character.

The Traitors Tome and Survival Secrets are set aside for later use. All cards are shuffled and stacked in their specific piles (Omen, Item, and Event). The three starting tiles are located and placed.

The room tiles are shuffled and prepared to draw from. All miniatures will start in the Entrance Hall.

From this point, the object of Betrayal at House on the Hill is to explore said house and strengthen your character to prepare for the inevitable conflict.

Betrayal at House on the Hill is split into two phases, Exploration and the Haunt. The exploration phase is used to build your character and collect inventory items to assist you. The Haunt is the second phase where the traitor is revealed and the conflict begins.

In either of the two phases the following set of actions are allowed, in any order and as many times as your cards and traits allow:

After the haunt starts, one additional action is available once per turn:

As you explore the house, items will be collected from rooms as indicated on the new tile placed. Not all rooms will grant items. When you draw a card (of any type) your movement ends. The various cards are obtained from the following:

Item cards can be traded, used, or dropped, with certain limitations. For each individual item you can Use, Trade, Drop, Steal (combat rules) or pick up an item, but only one of those actions per turn. Making an attack with an item is considered as using it.

Die rolls in the game use a number of the eight dice which have the following sides: zero, one or two dots. The die rolls work differently for different scenarios:

Example - Two die of physical damage. Roll two die, count the number of dots, then subtract that number from either or a combination of Might and Speed.

Trait rolls are executed against a trait specified by the event, room, or action. You roll a number of dice equal to the trait and have to reach a certain number, indicated by the event.

Example - Sanity Roll of three required, your explorer has four Sanity. Roll four dice and count the number of dots. three or more will be a successful role in this scenario.

When attacking, select dice based on your might trait (unless something different is specified). Your opponent will do the same. The damage dealt is the difference between the two rolls. For a tie, no one is hurt. Additional special attacks will be possible and described in other details of the tome.

Haunt rolls are made by rolling six dice. The total number rolled needs to be equal to or greater than the number of omens that have been discovered. If this roll is failed, the haunt will begin and the second phase is initiated.

The Haunt will be revealed based on the room you are in and the haunt card drawn. This creates a unique, repayable experience with up to 50 different haunts possible. During this phase, a traitor will be revealed (or a hidden traitor exists).

Each member of the party will then attempt to complete the objective for their respective tomes (Traitors Tome and Secrets of Survival). Movement and exploration can continue as normal, but winning the game will ultimately be determined by who can complete their objective first. Both the traitor and the survivors will be given unique and hidden information to assist in achieving their objective, and should only be shared between party members if they are known not to be the traitor.

The traitor will often gain new abilities and increased traits as well as additional minions to assist in destroying the survivors. This helps to balance the second phase when the traitor is often acting alone.

This is the most thrilling aspect of the game where you are pitted against one another and all of the items you have acquired will help you to achieve your objectives. This section appeals to RPG fans, where having the best items and traits could make you stomp the opposition and see them fear for their lives.

Final Thoughts On Betrayal At House On The Hill

Betrayal at House on the Hill is an in-depth, well-designed game, but it is not without its flaws. This game should not be played by inexperienced or new board gamers, since some of the rules that make up the second phase can be complex and confusing.

That said, for any RPG fans or experienced gamers, the process can be extremely rewarding. And it will almost never get boring since there are so many variations in the second phase. The game also fits well with Halloween based themes and should be part of any serious player's collection.

Editors note: This blog was originally published on September 19th, 2017. Updated on October 26th, 2021 to improve the information available.