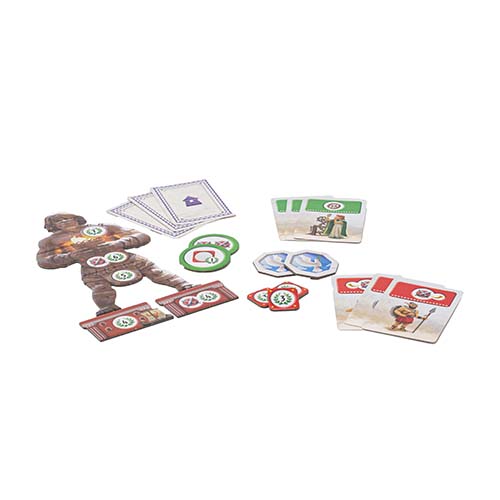 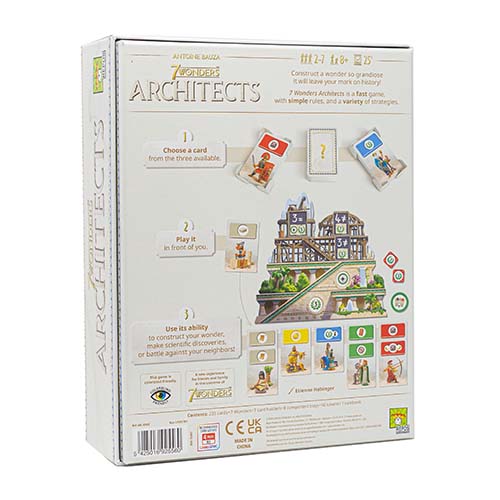 you could earn 2875 victory points

you could earn 2875 victory points

In 7 Wonders: Architects, 2-7 players race to become a leader of the ancient world by completing an architectural wonder that will last through the ages. Players receive an unconstructed wonder at the beginning of the game and must collect resources to build their society, develop military might to navigate conflicts, oversee resource management, research science improvements, and c…
Read More
Category Board Games Tags 7 Wonders, 9+, Companion App SKU ZBG-ASMARCEN01 Availability 3+ in stock
Share
Share this
87%

In 7 Wonders: Architects, 2-7 players race to become a leader of the ancient world by completing an architectural wonder that will last through the ages.
Players receive an unconstructed wonder at the beginning of the game and must collect resources to build their society, develop military might to navigate conflicts, oversee resource management, research science improvements, and collect civil victory points as they race to leave their mark on world history.

7 Wonders is regarded as a bit of a modern classic. Playing 2-7 players in around 20 minutes is no easy feat. While I've moved on to other drafting style games, like It's a Wonderful World and Bunny Kingdom, many still rave about 7 Wonders. While 7 Wonders might not be a keeper for me, 7 Wonders Duel remains one of the best 2 player games there is, taking the formula and boiling it down to near perfection. So it's not surprising I was very skeptical about 7 Wonders Architects.

The early information didn't seem to distinguish it from the main 7 Wonders very much. And I also questioned the idea of simplifying the game, wondering what would actually be left in terms of any depth. Thankfully I was wrong.

The first thing you will notice upon opening the box is the brilliant components. There are 7 (obvs) nations in the game each with their own wonder to build. At first you will need to punch out the tokens and wonders and then each nation has it's own plastic box. In that you place all the cardboard parts of the wonder for that nation and it's own deck of cards complete with a plastic card holder.

There is also a general tray for a central deck and the general tokens. Each deck also has a plastic clear lid that snaps on keeping all the components snug in their compartments. There are stickers to apply to the nation boxes that give you their special power and a diagram showing how the wonder is constructed.

Each player will choose one of the nations to play as and take their box. Simple arrange the wonder in the correct shape, facedown and shuffle up the cards placing them face up in their holder. Each player places their cards deck between them and the the player to their left. The general deck is shuffled and placed face down in the centre of the table along with progress, military and peace tokens.

On a players turn they will take a card from either the deck on their left or right or the general deck. Remember. though that two of these decks will be face up and may provide the other players with cards they need!

Card come in a few varieties, resources used for building your wonders, coins which are wild resources. Points cards give end game points and sometimes access to the cat statue. This standee is worth 2 end game points and allows the holder to look at the top card of the central deck before choosing which card to take. Of course as soon as someone else takes a points card with a cat they take the standee too.

Science cards reward you with progress tokens when you have three different ones or two the same. Progress tokens provide upgrades and/or victory points. Being able to draw more cards is always well worth pursuing. But progress tokens can also be a great source of points.

Military cards both make you stronger and can trigger a military conquest. When this happens you compare your shields to the players to your left and right, the player with the most taking a 3 point token.

The big difference here is that you discard a lot of your card to pay for things. Resource cards, Science cards and some military cards are all discarded upon use meaning you don't build a large unwieldy tableau as you do in the main 7 Wonders game. Everything is a bit more welcoming and manageable.

You can take a card from any of the three piles available to you with no cost whatsoever, so the game comes down to your decisions, priorities and a little bit of luck. The game will end when one player has completed their wonder.

Each wonder has the same costs but they can be built in different orders depending on the shape of the structure in question. They all cost resources cards starting at two the same and two different and increasing in cost. This is another difference. In the other 7 Wonders games you would need specific resources whereas here it is simplified to matching of different sets.

Not only this if you have the required set you must discard them to build your next step of your wonder. The wonders all come with slightly different powers that are obtained by building certain stages. Usually these gain you extra tokens or cards and with good timing you can combo a fair old chain.

The best thing about 7 Wonders Architects is the speed of play in every sense of the word. From learning, teaching and playing the game whips along at a great pace, meaning my family will not only play it with me, but more than once in a row too!

There is also enough game play here to make it a solid choice for game night. Especially when you have 15 minutes to spare waiting for a game to finish or someone to arrive. In distilling the elements of 7 Wonders down to their bare minimum something has been found rarely than lost and than something is quite compelling.

Of course it obviously has limitations. There is only so much depth here, but given the game length it isn't an issue for me. It has more than enough depth for the time it takes to play. I suspect the Pyramids are the best wonder in the game as they score the most points but they are also the most boring given their lack of any other power.

Enough Room To Swing A Cat

Military and science still play their parts, but don't provide separate routes to victory this time round, rather they offer a lot of point potential to those sage enough to utilise them. Blue scoring cards are always a good shout too, especially those with cats on. Grabbing that Cat standee really does help giving you a chance to peek at the central deck before you decide where to draw from is always a tempting power!

This is not game of the year material but it is an excellent example of how streamlining can create something akin but different to it's source. 7 Wonders Architects is one of those games that deserves a spot in most peoples collections, and I'm sure it will become many people's 'gateway' in to the wider hobby.

This blog was originally published on Nov 9th, 2021. Updated on May 25th, 2022 to improve the information available.