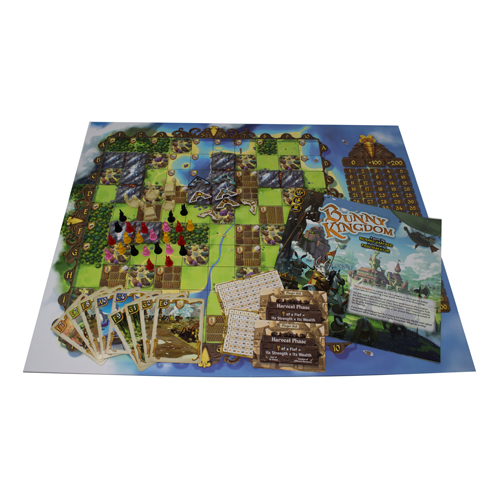 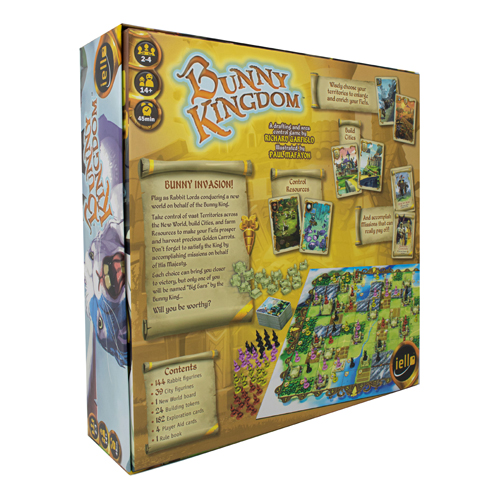 you could earn 3649 victory points

you could earn 3649 victory points

Take on the mantle of Rabbit Lords and lead your rabbits into the new land of Bunny Kingdom, claiming territory, building cities and growing vital resources as your fiefs grow and flourish, all in a bid to harvest the most Golden Carrots. Heavyweight designer Richard Garfield has created a two to four player game that is as cutthroat as it is cute, utilising card drafting and area …
Read More
Category Board Games Tag Richard Garfield SKU ZBG-BUNNY_K Availability 3+ in stock
Share
Share this
85%

Take on the mantle of Rabbit Lords and lead your rabbits into the new land of Bunny Kingdom, claiming territory, building cities and growing vital resources as your fiefs grow and flourish, all in a bid to harvest the most Golden Carrots.

Heavyweight designer Richard Garfield has created a two to four player game that is as cutthroat as it is cute, utilising card drafting and area control mechanics and played over four rounds.

Once you have selected your two cards, you pass the rest on to the next player and choose from the new hand that has just been given to you by an opponent. You’ll have delicious decisions to make when considering what to take and what to pass on. Is it worth leaving a card you need in the hand and hope that it comes back around, or do you take it now to ensure you get it, but then you may miss out on another important card.

The round ends when all cards have been claimed.

If you need to brush up on your times tables, then Bunny Kingdom is the game to help, as you multiply the spires on the cities in your fiefs with the resources produced within the same fief. As the rounds roll by, you’ll have more spires and more resources, meaning a significant points (Golden Carrot) increase as the game progresses.

This game comes with beautiful components and fantastic art by Paul Mafayon that every gamer will enjoy.

Who will draft best and ultimately win the battle to produce the most Golden Carrots and be name King or Queen of Bunny Kingdom?

Bunny Kingdom doesn't sound like the kind of game that you would recommend to a group of adults, or place proudly upon your gaming group table. However, I have now done just that on multiple occasions and will continue to do so. I think it is fantastic and you should definitely give it a chance.

Firstly, when you open the box you are immediately drawn to the beautiful little castle and rabbit miniatures. The castles are detailed and have little indentations which the rabbits slot into; already, little details like this make me want to play the game.

The instructions are clear, and the rule book gives you gameplay examples which always helps to get a game to the table quickly.

You play as a group of rabbits that slowly accumulate territories across an unclaimed land, with the main goal of seeking out cities, gaining resources and building Fiefs (a collection of territories containing cities and resources).

Though an area control game, Bunny Kingdom's main aspect is card-drafting. At the start of a round players are dealt a number of cards, they choose two cards to play and pass the remaining ones to the next player; this continues until all of the cards have been played.

There are four rounds in a game of Bunny Kingdom and the winner is the player who has accumulated the most Golden Carrots in the end.

To get Golden Carrots you will need to have a good combination of territories, cities, resources and Parchments, all of which are acquired through card-drafting.

Gaining territories is done by playing a card which features a coordinate. These coordinates correspond to a space on the board and if you are lucky, these spaces might even get you an extra city or resource (more to come on these later).

The final type of card that you will come across are Parchments. These cards gain you either a treasure (with a fixed Golden Carrot value) or a secret objective/ability which will give you an end-game advantage for when you do the final scoring.

One of the joys of Bunny Kingdom is the process of slowly connecting a group of territories to create a larger one. It is much harder than the light-hearted box and contents imply. The bulk of Golden Carrots are awarded by the number of city turrets multiplied by the number of different resources in each of your Fiefs.

To even score points in this game you need to have already gained multiple territories, built cities on them and started producing resources too. It is surprisingly difficult and complex.

Someone could say that gaining decent territories is based solely on the luck of your hand of cards. Yes, there is luck, but mostly there is prioritisation and strategy. You can only choose two cards before you pass the rest to your opponents.

Therefore, you must juggle the multiple opportunities in each hand to determine what will provide the best outcomes for you. Do you risk giving a decent card to your opponent? Or do you play a card that your opponent is after just to keep it from them?

Whilst many people tend to get caught up in the main area control element of the game; that is not the only path to victory. Despite totting up points at the end of each round, the Parchment cards are only revealed at the very end and thus this game is brilliant for the surprise win.

Whilst one player believes they may have won thanks to their expansive territories, their opponent might have been cleverly squirreling away secret objectives and treasures which sneakily lead to their late victory.

Bunny Kingdom requires lots of thought and strategy, is incredibly fun to play and looks great on the table (especially when lots of territories have been claimed and there is a sea of bunny ears). I love the variety of options that each card brings to the game and think that the ability to keep the final victory uncertain until the very end is a triumph.

Rabbits wouldn't be my first choice for theming a successful game and I imagine that point alone has put many people off. However, if you can get past the theme you will find a game of great complexity and fun. Whilst I think that this is a brilliant game, with fantastic mechanics; it is not without its faults.

My one main concern is the sizing of the components. Despite being detailed and well-crafted, they are simply too small. You will love the game as it is, but like me, you will probably struggle with the final scoring due to the cramped territories being full of tiny rabbit miniatures.

This issue does not break the game but makes it much harder to speedily process each player's scores. If the board, cities and rabbits were bigger, it would be far easier to keep track of everything at the end of the game.

I think that Bunny Kingdom is a 'must' for any collection and with some minor tweaks to component sizing it could be flawless.