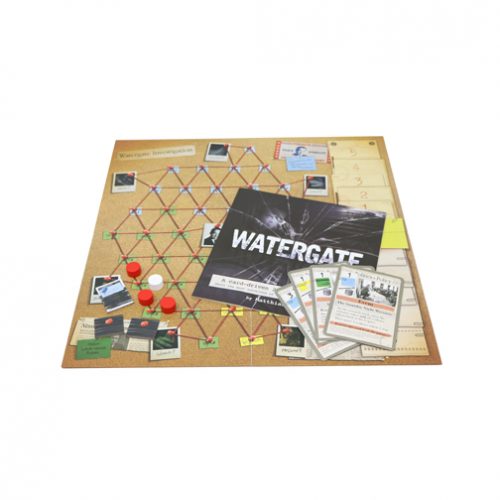 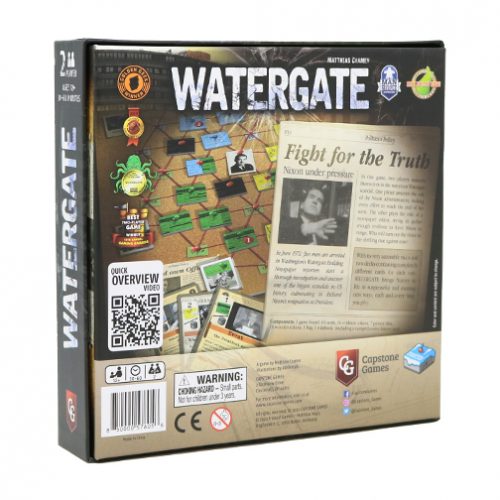 In the two-player game Watergate, one player represents the Nixon administration and tries not to resign before the end of the game while the other player represents The Washington Post and tries to show the connections between Nixon and some of his informers.
Read More
Category Board Games Tags Best Sellers, BGG Golden Geek, Capstone Games, Dice Tower, Golden Pear, Matthias Cramer, Podcast Approved, Value For Money SKU ZBG-CAPFG1001 Availability 3+ in stock
Share
Share this
86%

In June 1972, five men are arrested in Washington’s Watergate building. What looks like a third-rate burglary attempt on the headquarters of the Democratic National Committee induces journalists Bob Woodward and Carl Bernstein of the Washington Post to start a thorough investigation. Over the following two years, they discover that the five men were directed from within the White House to spy on political opponents. As a consequence, in 1974 President Richard Nixon resigns from office to avoid impeachment.

In the two-player game Watergate, one player represents the Nixon administration and tries not to resign before the end of the game while the other player represents The Washington Post and tries to show the connections between Nixon and some of his informers.

The President of the United States is facing impeachment charges for criminal activities designed to undermine and smear his opponents. He fires a key figure tasked with investigating possible collusion between his administration and men accused of spying on his rivals and tampering with the democratic process. His relationship with the ‘fake news’ press is tetchy at best, paranoid at worst. And, to top it all, somewhere in the White House is a leak!

No, this is not the Trump administration in 2019. This is the early 1970’s and the Oval Office incumbent is number 37, Richard Milhous Nixon, caught in the crosshairs of a group of investigative journalists racing to uncover the biggest scandal in American political history. This President versus press game of cat-and-mouse is the conspiratorial atmosphere of intrigue and deception against which designer, Matthias Cramer, sets his two-player, card-driven push-me-pull-me, Watergate.

In Watergate, you are either President Nixon, desperately trying to cover his tracks and salvage his Presidency, or Woodward, Bernstein and Bradlee, chasing the leaks, information and, famously, the money right to the top in an effort to expose the truth and topple the President.

The board is split into two key areas of play: the evidence board and the research track. The evidence board is where the journalist player tries to use evidence to form a link between Nixon and any informants they can persuade to turn on the President. Nixon meanwhile is attempting to persuade informants to keep their mouths firmly shut and to use covered up evidence to block and thwart the journalists attempts to pin the scandal on him.

Informants and evidence are unearthed or buried by manipulating tokens on the research track through card play. Each round, players draw 4 to 5 cards (depending on who has the initiative) from their own deck. The decks are slightly asymmetric but mainly balanced, with cards representing individuals and events from history who were sympathetic to their respective cause. Nixon has co-conspirators, where the journalists have… well, journalists.

As with other card driven historically themed games like Twilight Struggle, 13 Days and Labyrinth: The War on Terror, cards can be played in multiple ways. Either for their value to move tokens and counters towards the player on the research track or for their event, which will usually allow players to win the support or silence of an available informant or manipulate evidence and tokens on either board in powerful ways.

However, powerful events often carry the cost of removing the card from the game, meaning they need to be played at a time that maximises their impact. Play all your events ineffectively or too soon and you may be forced to sit back and watch helplessly as your opponent cleans up. Hold on to them for too long and you may find the evidence board tips too much against you to recover. In what is a relatively short game, the timing and order in which you play your cards is key to victory.

So, how do you win? The journalists win if they manage to create a chain of evidence between Nixon and two recruited informants, thus bringing disgrace on the President. Nixon wins if he manages to thwart the journalists’ efforts long enough to win 5 momentum tokens or run down the game supply of momentum tokens, signifying that Nixon was successful in whitewashing Watergate long enough for Nixon to complete his term in office and the public to become disinterested/come down on the President’s side - #FakeNews.

Ok, full disclosure, I’m a massive fan of card driven historically themed games. Twilight Struggle is my favourite game of all time. I’m also a massive fan of this era of US history and this isn’t the first game that has given me the somewhat perverse pleasure of playing as the quintessential American bogeyman, Richard Nixon (Thanks 1960!). So, I guess my expectations for this little box of political intrigue were high. But boy did Matthias Cramer meet them!

First off, the simplicity of the design abstracts the events of Watergate into a tense head-to-head of move and countermove. This tension is further tightened by the brutal nip and tuck pace of the game (the box says 30-60 minutes, but once you know the game it’s toward the lower end) as the evidence board quickly fills with revelations and cover-ups and Nixon races to gain momentum.

The jigsaw like join-the-dots puzzle on the evidence board is a satisfying and unique element that prevents the game feeling like just a light derivative of 13 Days and Twilight Struggle, and allows the game to punch well above its small-box weight.

A fast pace, coupled with the asymmetric win conditions also makes the game vastly replayable, as each role offers different choices and strategies; Nixon needs to balance winning the momentum token with not giving too much free reign to the journalists on the evidence board, while the journalists must manage the reverse, efficiently chaining links in a way that isn’t too obvious and easy for Nixon recognise and block. Furthermore, if you lose in one role, the game is quick enough to turn the board and try your luck the other way straight away. Though I’m being Nixon every time, right!

Is my love for Watergate enhanced by my knowledge and interest in the historical era from which it draws its theme? Undoubtedly. But the game is abstracted enough to make that less of a problem and comes with a handy historical background to each card and the Watergate scandal generally (educational too, see!).

And, although a broad understanding of the Watergate scandal helps, for me, the success of Cramer’s design lies, not in dogged faithfulness to historical specifics, but in taking the broader atmosphere of the situation those specifics existed in and turning that into a thrilling, cutthroat tug-of-war. You don’t need background knowledge to experience the moods and feelings of the game. Watergate drops players drops into the second-guessing paranoia and rapid-fire decision making of its protagonists and antagonists, recreating those emotions, if not the factual events that caused them, superbly.