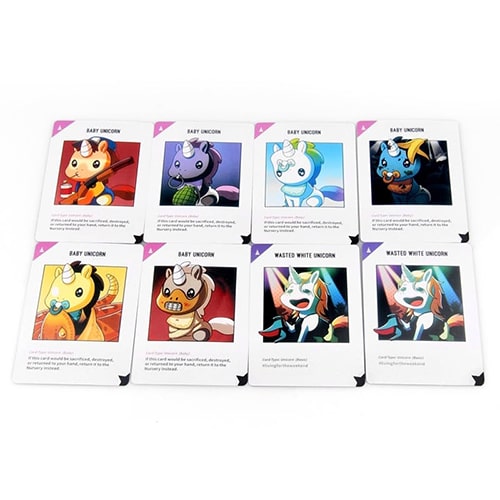 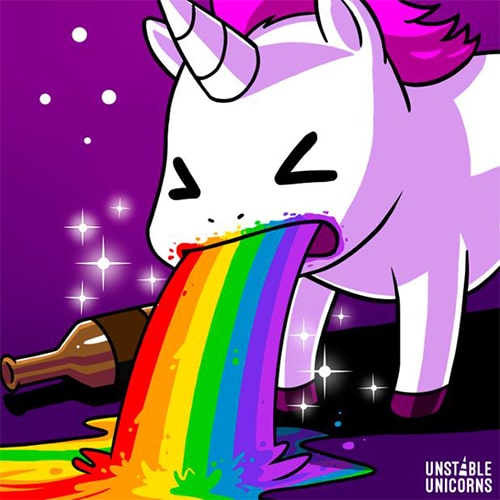 you could earn 1859 victory points

you could earn 1859 victory points

Unstable Unicorns is a strategy card game, in which you are trying to be the first person to collect seven unicorns in your stable. Sounds simple enough but your opponents will be racing to do the same and be willing to stop you achieving your goal at any cost. Inside the magnetised box there are 105 cards with cute artwork, a rulebook and a selection of quick reference cards that c…
Read More
Category Board Games Tags Big Groups, TeeTurtle, Unstable Unicorns SKU ZBG-TEE3678UUBSG1 Availability 5+ in stock
Share
Share this
80%

Unstable Unicorns is a strategy card game, in which you are trying to be the first person to collect seven unicorns in your stable. Sounds simple enough but your opponents will be racing to do the same and be willing to stop you achieving your goal at any cost.

Inside the magnetised box there are 105 cards with cute artwork, a rulebook and a selection of quick reference cards that can be handed out to players to make gameplay easier.

The gameplay is fairly simple, with four phases of a turn played in order:

You start with a baby unicorn in your stable and over the course of the game will collect more unicorns, but don’t get too attached to them, destruction could be right around the corner.

This is a fast paced game with easy to teach rules but also has enough strategy depth to be engaging and tactical. There are 20 different magical unicorns to collect, each with a special power, magical cards that have different effects on the game, stable upgrades/downgrades and much more.

You will need to balance defending your own stable whilst going on the offensive to make sure your opponents don’t win; it is a difficult balancing act but all part of the fun. You will have a blast playing with friends and the simplicity of the rules paired with the randomness makes it highly re-playable.

This is how Unstable Unicorns, by Rami Badie, introduces itself and it’s one of those rare games I find myself falling in love with from the moment I opened the box. From the cute artwork to the fast pace rules that are so simple to learn that I think the 14+ age recommendation is way too high, this game pulled me in before we even had our first play-through.

It’s a fast paced, take-that game for 2-8 players where each person races to be the first to collect seven unicorns in their stable while stopping their opponents from doing the same by any means necessary!

Inside the compact magnetised box there are 105 cards and a rule book. The cards are split into seven distinct types: instant counter cards called Neighs, and yes, this game likes its puns, that prevent the last played card from entering the game. Magic cards that have a special effect that is applied immediately and can range from killing your opponents’ unicorns to stealing cards from their stable. Stable upgrades that give you an advantage if the card remains in play under your control, for example, one of these lets you bring a second card into play on your turn while another makes you immune to Neigh cards. Stable downgrades that give your opponents’ disadvantages, such as limiting the number of unicorns they can play or even turning their unicorns into pandas. Basic unicorns that don’t do anything but may be affected by other cards. Baby unicorns that can only be brought into play by special means and finally Magical Unicorns that have their own unique abilities that may allow you to play a basic unicorn for free each turn or destroy an upgrade in another stable.

There are also a selection of quick reference cards that can be handed out to players, so they can look up important gameplay terms without having to pass around the rule book. The cards are made of decent quality stock which since taking out of the foil wrap has only curled back the tiniest amount and each one has stood up to being passed around a table as we play.

To begin with, the baby unicorns are removed from the deck and placed in their own pile, this is called the nursery, each player then adds one baby unicorn to their stable. This area in front of each player and holds all the cards that affect them in play. The rest of the cards are shuffled and five are dealt out to each player, the rest go back to the centre of the play area to draw on each turn.

Gameplay is simple and quick to pick up; at the start of a player’s turn they draw a card then may either play one card from their hand or draw another card. While Magical Unicorns and magic cards themselves often have effects that come into play immediately, stable upgrades must usually be in your stable at the start of your turn to gain their benefit.

Also, there’s a hand size limit of seven so don’t get too greedy drawing cards or you’ll just have to discard some at the end of your turn.

I first came across Unstable Unicorns while it was on Kickstarter and it was Rami Badie’s art that drew me in. Gameplay seemed simple to learn and fast enough to keep the attention of the gaming group I play with, which favours light games, and its price was such that even if no one liked it, it wouldn’t feel like wasted money.

It wasn’t until I got my hands on it that I truly realised what a gem it is. Everyone I’ve played this game with has loved it, praising the speed of play and the amount of interaction between players, a must for a good take-that game. However, not everyone has been as enamoured with the art as I have, claiming it to be too generically cute and just jumping on the unicorn fad that’s currently in vogue.

On the plus side, Unstable Unicorns boasts an impressive amount of replay-ability. With four expansions available you can supplement the base game for even more hours of unicorn collecting fun. The expansions are;

The obligatory NSFW expansion that we enjoy sneaking in after a few games with inexperienced players. Adding this expansion makes the overall game time shorter as it adds several ways to steal unicorns from other players and it has two alternate game modes for adults. It’s also the only expansion that won’t fit in the core box, instead, coming in a tuck box as it’s the largest of the four.

Adding several powerful dragons themed cards, this expansion extends the game time a little as it includes many magic cards that can wipe out a lot of unicorns at once.

This adds some super cute cards but does the least to affect the game time, most of the cards in this set are basic unicorns.

This pack was designed to have the biggest impact on the way gameplay works. The four unicorns of the apocalypse are extremely powerful in their own right, also there are also several cards that can almost wipe the playing field clean. Adding this pack massively extends the playing time and can in some cases almost make the game a little too long.

Unstable Unicorns may be light and yes it doesn’t have a great deal of depth to it, but it is a lot of fun. It makes a great filler game if you don’t include the Apocalypse cards or can become the main game if you do. If you’re on the fence about whether to try this I’d say take the plunge, no doubt you’ll soon be as addicted to unicorns as I am.