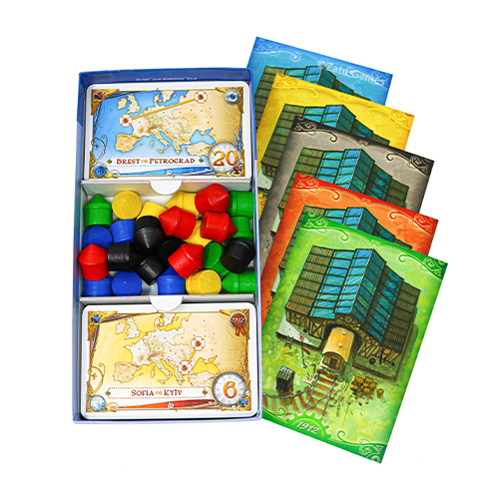 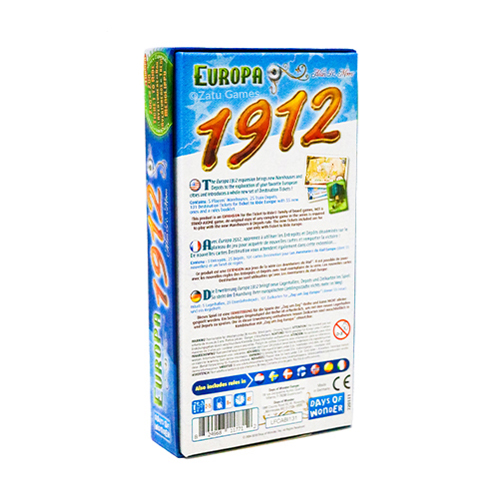 you could earn 1405 victory points

you could earn 1405 victory points

This expansion also introduces Warehouses & Depots - new game rules and pieces that create an additional strategic layer and can be played with any of the Ticket to Ride maps. Wooden Train Depots are placed on cities selected by each player. Throughout the game, each player's Warehouse will accumulate Train cards and those who have the foresight, clever timing, or just plain good fortune to build a route to a Depot can make off with a fistful of Train cards. Depot placement and skillful Warehouse tactics become a key part of a winning Ticket to Ride strategy!

Today we're talking about the Ticket To Ride 1912 Expansion. This small box expansion to Ticket to Ride Europe adds some new ways to play and keeps things nice and fresh. For those of you who are unfamiliar with Ticket to Ride - I’m sure there are one or two of you out there - this is how it works.

In a game of Ticket to Ride, players compete to finish building train routes across a map. The longer the route, the more points it is worth. You can also get bonus points by linking up two named cities on a ticket card. To build these routes, you’ll be collecting and discarding sets of matching coloured train cards. Four red trains get you a red route that is four spaces long. It’s pretty simple but very engaging and tactical in places.

There are two main modules to the Ticket to Ride 1912 Expansion: warehouses and new tickets. Warehouses are the biggest change to the game you’ll find in this expansion and they can switch up how you look at getting train cards into your hand. At the beginning of the game, each player is given 5 depot pieces and a warehouse card. Each player will place one of their depots on a city somewhere on the map.

Now, every time you choose to draw train cards, things are a little different. First of all, you have to draw a card off of the top of the train deck and place it under anybody’s warehouse card without looking at it. With the number of trains players will be drawing, the number of cards underneath the warehouse cards can get pretty impressive. But how do you claim them?

I’m glad you asked, dear first-class passenger, travelling on this review of mine. Whenever you claim a route into a city that contains a depot, you might be able to snag some extra cards. You can discard one of your unused depots to claim all the cards underneath the warehouse card of the player who owns the depot. As I said, this can be quite the windfall if you time things well.

You can also, as a free action on your turn, place one of your depots into a city that doesn’t contain another depot. This is a nice little module to add into Ticket to Ride. It adds a little bit more complexity to master without being too daunting to add. It also should be said that the warehouses can be played with any standard version of Ticket to Ride. Also, it can’t be used with smaller games or Rails and Sails.

The other half of the expansions, the tickets, can only be used with Ticket to Ride Europe. In the box, you will find another set of all of the tickets from the base game, as well as 19 new city combinations to keep things fresh. There are also a few new long routes that can be mixed in with the original set and, lastly, the new big city cards.

The big city cards are an alternative set of tickets that can be used in place of the standard ticket set. These tickets have at least one of the big cities of Europe on them. This can make the routes into these cities fiercely contested and can force you into playing a lot more of the stations from the base game.

This is definitely a welcome change in Ticket to Ride 1912. A lot of times when I've played Ticket to Ride Europe, I have completely ignored the stations. There was generally another way into a city I needed or a different ticket I could attempt. With the big cities cards in play, this is no longer the case. A lot of times, you need to make sure you have a path into at least a few of the big cities to make sure you have any chance of completing the ticket card routes.

Again, this is a nice way of keeping things fresh. There are a few different suggested ways of using the new tickets in the rules, but my favourite is definitely the big cities variant. I think that if you enjoy playing Ticket to Ride quite aggressively, this may be the variant for you.

So, there you have it. Ticket To Ride 1912 is only a little box but it definitely has some good stuff in it. The cards are all nicely illustrated and designed, and the depots are functional. If I had a complaint about the components, it’s that the warehouse cards are a bit flimsy. They are thinner than the standard cards and don’t have rounded edges, so my old set is starting to look a little beat up in places. Also, it would’ve been nice if the different coloured warehouse cards had different illustrations on them. The different coloured train cards do, so it would've been nice if the warehouses did too. But these are small little niggles rather than awful game-breaking issues.

Overall, Ticket to Ride 1912 is a nice expansion to add to Ticket to Ride Europe, and in the case of the warehouses, other Ticket to Ride games too. I probably wouldn’t recommend adding this in on your first game with a new player though. It’s not that this is a tricky teach. It isn’t. It’s just that it adds a little too much complexity to keep Ticket to Ride as the fantastic gateway game and introduction to the hobby that it is. But on that second or third game? I would absolutely be adding this into the mix!