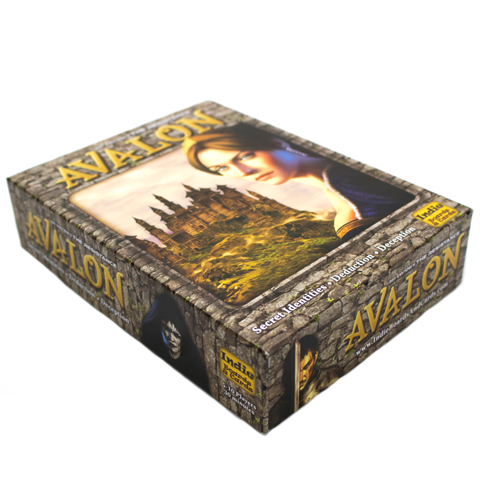 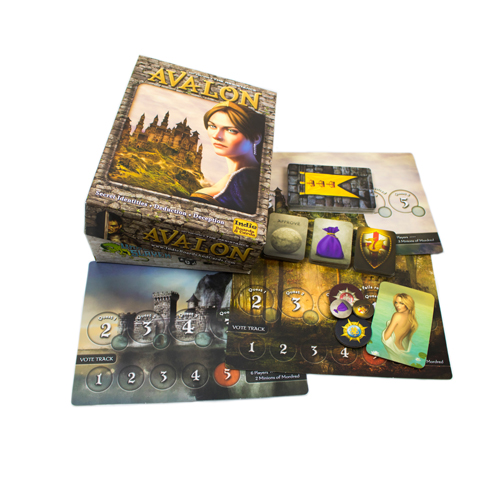 you could earn 1329 victory points

you could earn 1329 victory points

The Resistance: AvalonThe Resistance is one of the purest social deduction games there is. Two teams, one trying to succeed and one trying to sabotage. There are more ‘good’ guys, but they don’t know who each other is. Over the course of up to five missions players try to figure out who is trust worthy and who isn’t.In Avalon the resistance takes on an Arthurian theme and le…
Read More
Category Board Games Tags Best Sellers, Golden Pear, Indie Board & Cards, Podcast Approved, The Resistance, Zatu Gold Award SKU ZBG-IBCAVA1 Availability 5+ in stock
Share
Share this
89%

The Resistance is one of the purest social deduction games there is. Two teams, one trying to succeed and one trying to sabotage. There are more ‘good’ guys, but they don’t know who each other is. Over the course of up to five missions players try to figure out who is trust worthy and who isn’t.

In Avalon the resistance takes on an Arthurian theme and leans into it. Not only are you part of a team but you’ll also take up a character with their own unique power to mess with the status quo. Powers that might be too strong are tempered by restrictions so while Merlin might know who the traitors are they cannot reveal that they are Merlin, leading to bluffs, double bluffs and even fabled QUADRUPLE BLUFFS!

Each player is dealt their role which they keep hidden and then the team leader chooses a number of players (dependant on the player count and round) to go on a mission. Each player on the mission will be given a success and fail card. If you are on the side of good you must choose the success card but if you are evil then you can choose either. Your choice is handed back to the team leader who shuffles them before revealing them. Then follows a discussion about what is revealed. Of course if there is a fail you know at least one of the people who went on the mission is evil…

This leads to multiple accusations and declarations of innocence, the outcome which dictate the mission choices for future rounds. The addition of player powers make for added complexity/variety, giving you a social deduction game that will last awhile!

In The Resistance: Avalon, you are a knight of the round table, setting off on quests to save the realm. That is unless you're one of Mordred's minions, pretending to be a knight whilst secretly sabotaging those same quests. This is a quick, loud and classic social deduction and bluffing game.

It's a pretty small box, containing a few different types of cards, tokens and several small player boards (of which one is used dependant on the player count). The components all feel of a good quality and the artwork is nice, but you are unlikely to feel any sense of wonder on opening the box.

There is a small, clear rulebook and set-up is up and running nearly instantly. Even explaining the rules to newcomers won't take more than a couple of minutes.

Role cards are dealt out at the start of the game to each player, with a set number of good and evil roles dependant on the player count. Someone will read out the script from the rules (pretty easy to learn after a couple of games) and everyone will close their eyes and put their fists in front of them.

The leader will now pick a certain number of players to go on the first quest (the number dictated by the game board based on the number of players). At this point, there can be an open discussion with people voicing their concerns or validating the choice. This won't usually happen so much at this stage as only the bad guys and Merlin will have any information, and Merlin can't reveal himself, as you'll discover shortly! All players then either place approve or reject tokens face down. These are then revealed and if the majority have approved, the quest goes ahead.

Should there be more rejected tokens or a tie, the quest fails. The leader then moves on to the next player who now chooses those to go on the quest, and the process repeats until either a quest is approved, or there are five rejections in a row, at which point the bad guys win.

Once a quest is approved, each of those players secretly plays a “success” or “fail” card face down and discards the other. The quest must be passed by everyone to succeed. Any fail votes will doom it (although there are a handful of quests that specifically require two or more fails).

Then the leader token passes and everyone moves on to the next quest. Usually preceded by lots of accusations “I told you so”, laughter and discussion.

The Knights need to pass three of the five quests to win. The caveat to this is that the evil players will get one last chance to win if they can assassinate Merlin! They will reveal themselves at this point, discuss and the evil player who was dealt the assassin card will make the choice as to who they deem to be Merlin. Get it right and they have snatched victory at the last! This is a necessary mechanic to ensure that Merlin must subtly influence his team and can't just reveal who is evil at the start.

The other way for the knights to be defeated is if three or more of the five quests fail.

There are a few additional roles to introduce once everyone is familiar with The Resistance: Avalon. Percival is a knight who knows who Merlin is, so can ensure he listens to him and can confuse the other team. Mordred isn't known to Merlin (or the other bad guys). Morgana is evil but appears as Merlin to Percival. And then there is Oberon, who is a bad guy that can't tell who else is evil, and doesn't appear to anyone, basically off playing his own game!

So, is The Resistance: Avalon any good?

The Resistance: Avalon is a classic with good reason. It's quick to pick up and play, and encourages bluffing, lots of debate and arguing. There was a classic game today where not only did the bad guys win, but they left the knights arguing amongst themselves “why did you approve that quest?" “Well, why didn`t you fail the earlier one?"

There is a great mix of logical deduction and intuition and body language at play. The feeling of being evil but persuading the group that you're good and that it was the other person who failed the quest, is second to none.

The Resistance: Avalon is highly recommended if you enjoy games which are interactive, loud and involve discussion and bluffing.