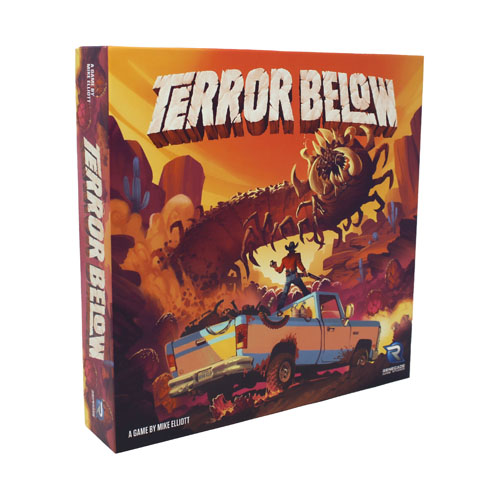 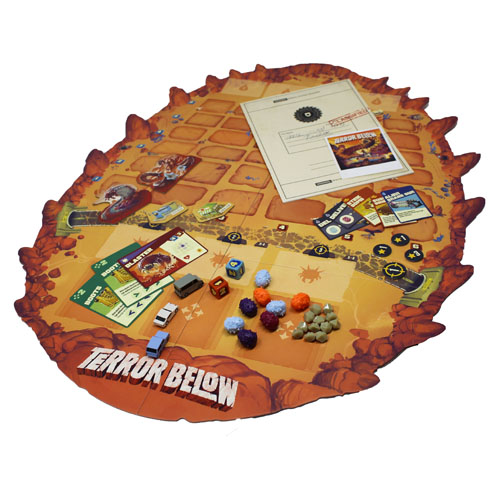 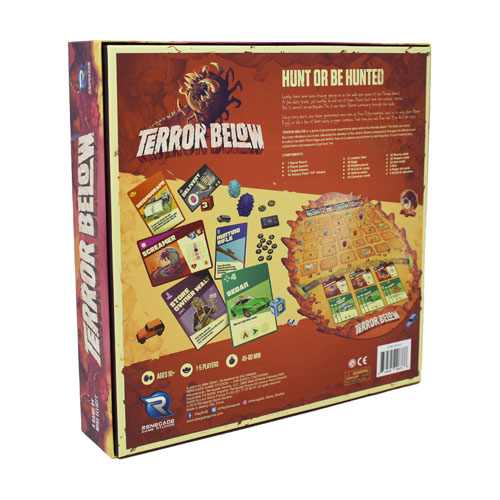 you could earn 3579 victory points

you could earn 3579 victory points

Add to Wishlist
Put on your boots! It’s time to wrangle some worms! Terror Below is a game of government experiments gone wild in the Nevada desert. The faster you move, the more vibrations you make, attracting the attention of the vicious worms underground. Navigate the difficult terrain to collect valuable worm eggs and deliver them to locations around town to claim bounties. If you’…
Read More
Category Board Games Tags Best Sellers, Mike Elliott, Renegade Game Studios, Silver, Terror Below SKU ZBG-RGS0878 Availability 5+ in stock
Share this
75%

Put on your boots! It's time to wrangle some worms!

Terror Below is a game of government experiments gone wild in the Nevada desert. The faster you move, the more vibrations you make, attracting the attention of the vicious worms underground. Navigate the difficult terrain to collect valuable worm eggs and deliver them to locations around town to claim bounties. If you're feeling lucky, collect items and weapons to go hunt 'em.

The goal of Terror Below is to be the first player to score 20 victory points (VP) by collecting worm eggs and delivering them to locations around town — or alternatively, by hunting down and killing those vicious worms.

During the game, your squad of unlikely heroes will visit locations around the small desert town to find bounties, scavenge for weapons, and try to survive as you distract the worms. Eventually, those worms will attack. If you are in their path of destruction, you better be prepared for a fight!

Tremors is one of those films that has earned the status of a cult classic. It's one which still holds up today. It was only a matter of time until this movie got the board game treatment. Renegade Games teased us earlier this year with a mystery release. People soon cottoned onto it and guessed it was going to be a game paying homage to the classic film. Terror Below lets players live out their Tremor dreams, taking on W.O.R.Ms (Weapons of Remote Massacre) with anything from a grenade to a pointy stick! Does the game do the film justice and give players that feeling of victory overcoming a Queen W.O.R.M?

In Terror Below, players must earn the most amount of Victory Points by delivering W.O.R.M eggs to various locations across the game map. They must do this whilst trying to avoid W.O.R.M attacks and using their action cards to manipulate the W.O.R.Ms movement in their favour. Players can move the W.O.R.Ms with these cards. When a W.O.R.M has enough cards on it, it will attack the spaces around it. This and potentially cause a player to have to defend themselves using the weapons and “hats” they have obtained throughout the game.

Terror Below is played over a number of turns. Players use one action card to move the W.O.R.Ms, take action points and activate any abilities associated with the card. The balancing of the game is evident here. The more action points a card has, the more negative the ability. For example, moving a W.O.R.M target marker closer to that player. Actions vary from movement, vaulting over other players, clearing rubble and collecting and dropping off eggs. Whenever a player collects and egg, that will end their action phase, no matter if they have action points left or not. Once a player has conducted all of these phases, you will check to see if a W.O.R.M attacks.

A W.O.R.M attacks when it has met a certain number of actions card below it. This amount is shown at the bottom of the W.O.R.M card. The health of the W.O.R.M is also shown. If it attacks, all cards are removed and wherever the W.O.R.M target marker is, is where the attack occurs. An egg will be placed in that specific space (the Queen works slightly differently) and then rubble is placed on spaces around the egg space, in differing patterns dependent on the type of W.O.R.M attacking.

If a player is caught in the attack, they must defend themselves, to avoid losing one of their three characters! They will have weapon cards that have a variety of uses and effects. They also vary in strength and effectiveness, giving the game a nice balance. There are also item and “hat” cards that can be used to mitigate attacks and even completely avoid them. Succeed in killing a W.O.R.M and you will be rewarded with VPs, making your journey to victory that little bit easier!

There are also bounty cards throughout the game which offer a greater amount of VPs for doing specific activities during the game. Deliver a specific colour egg to a certain location and you’ll find yourself getting a nice amount of points. The same goes for killing a certain type of W.O.R.M. There are four cards available during each turn so it’s a race to get them if you want them.

With various tasks going on throughout the game, players must keep their wits about them, making sure they avoid those attacks while also making the most of the bounty cards available to them! See the game's components in my unboxing video below.

How Did I Find It?

Of course, I have to start talking about theme! While this may not be an official Tremors game, it certainly goes a long way to paying homage to the film. The premise and storyline follow much of the film’s theme, with a few added bonuses. Those familiar with the film will not be disappointed as this certainly is a cheap rip-off of the film franchise. The nods to the film are evident and this theme is carried throughout the game in its entirety.

The rulebook gives you flavour text and is also formatted in such a way to look like a government document. This is something that is certainly befitting. The artwork gracefully fits that theme as well, having a cartoon look about it, something I quite enjoyed and does the game justice. Unfortunately, while visually the theme is there, I feel the gameplay itself, at its core, is just basic pick up and deliver. Over time, you begin to feel that more and more, which degrades that theme and story. Admittedly, it is becoming harder and harder to find new things to do with games but still, I feel Terror Below could have done more with the mechanics and gameplay to fit it more into the visual theme of the game.

One thing that did disappoint me about the game was the use of the W.O.R.M standees. One would expect that they would be used when a W.O.R.M attacks or moves but no! They are simply used to add to the theme and they are to be placed around the board while playing. This was a real disappointment for me but I can also see why it wouldn’t technically work as the board simply isn’t big enough to have the standees in play.

Theme aside, the game itself plays quite nicely. I got a real feeling of balance throughout, with the items and weapons all having varying effects but each balanced with the likelihood of you being successful using that item or weapon. Of course, there is still a luck element when drawing the cards but this was never an issue in the games I have played.

The one drawback in terms of the gameplay, I felt, was the admin side of things. You are constantly adding rubble and eggs to the board, and at times, it can be incredibly crowded. Therefore, you must have your wits about you when placing it all and this can at times be a little tedious.

The quality of the components is very good, with the wooden player’s meeples looking exceptionally cool. I did find that some of the eggs needed to have the burrs underneath them filed a little as they tipped over when placed. This wasn’t a massive issue though. Everything else included in the game was absolutely fine.

Terror Below also includes a solo mode, something more and more games are now doing. Modes from easy, medium and hard and all follow a short story with an objective that must be achieved by the player. The W.O.R.Ms are controlled by dice rolls, adding an element of luck into the mix. However, while extremely challenging, I found the solitaire modes to offer a good chunk of what the normal game had to offer. This is sometimes hard to find with solo modes.

Final Thoughts on Terror Below

Overall, I think Terror Below goes a long way to pay respect to the original film, Tremors. It definitely has the theme spot on, however the gameplay can let it down at times. Needless to say, while this may happen, it by no means makes this a bad game. Certainly, I have had many games in which I have been frantically rushing across the map and finding myself at the mercy of the giant killer W.O.R.Ms!

If you are a Tremors fan, then Terror Below is a must for you! Even for those not familiar with the film, you'l have a satisfying gaming experience with this one. The issues I mentioned are present, however they certainly don’t overshadow what this game has to offer. It certainly has enough in it to keep it interesting and offer a good experience all round!