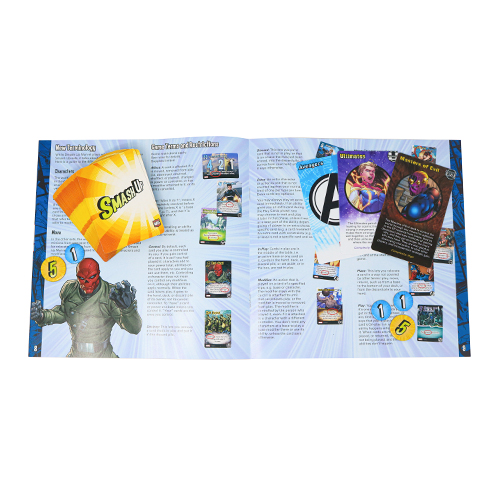 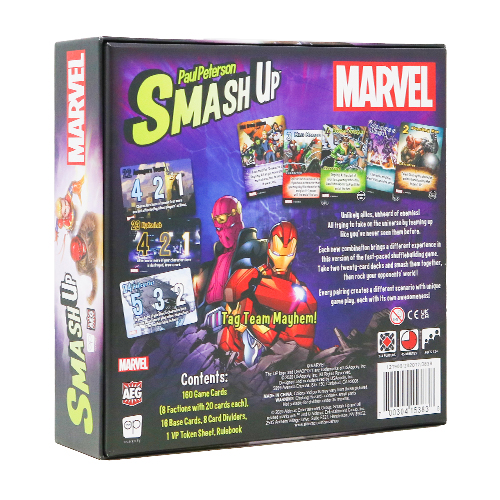 you could earn 2749 victory points

you could earn 2749 victory points

In Smash Up: Marvel, players smash up two groups of Marvel characters, such as the vigilant members of The Ultimates or the criminal masterminds HYDRA, to take over bases and score the most victory points. Mix and match the different decks of heroes and villains to see which combinations can best defeat the others! This game allows for fans to create stories that have never existed …
Read More
Category Board Games Tags Marvel, USAopoly SKU ZBG-USOSM011000 Availability 3+ in stock
Share
Share this
76%

In Smash Up: Marvel, players smash up two groups of Marvel characters, such as the vigilant members of The Ultimates or the criminal masterminds HYDRA, to take over bases and score the most victory points. Mix and match the different decks of heroes and villains to see which combinations can best defeat the others! This game allows for fans to create stories that have never existed in the Marvel universe. What combo will you choose?

Smash Up came out in 2012 and has since seen many different expansions and variations. One of the most recent is Smash Up: Marvel which brings in the wonderful world of Marvel into the crazy universe. The basic concept of Smash Up is to bring two different groups of characters and abilities from completely different worlds into one.

With this recent Marvel edition, you have the option to have Spiderman fighting alongside The Sinister Six against the Avengers and the Kree. Who doesn’t want to see that!? These decks can be mixed up with any other version of the game you have or future ones you plan to add to your collection. This creates a lot of variation and options in set-up and gameplay. It is the excitement of seeing these crazy combinations of heroes and villains fighting alongside and against each other, that makes this game so fun.

To start the game, players will in turn choose one of the eight groups of character provided in the game. Or from a wider pool if you have other decks. Once all players have two sets of cards, they then shuffle all their cards into their personal player deck. You will place locations card between the players. The number of which being decided upon, by the number of players plus one. So, for example, four locations in a three-player game.

In each player’s hand, they have more than just characters though. They have action cards that can manipulate their character's powers, reduce other players abilities, and even affect the location effects and breakpoint. This requires constant totting up in your head from all players. Trying to keep track of the locations fluctuating breakpoint and their current strength there, compared to the other players. This is a fun part of the game and keeps the tension high.

Games can be quick. The first player to score 15 points wins and this can come about quicker than you think, so you cannot fall behind early and need to be watching all players actions at all locations, all the time.

As you have realised, this is a very simple game You just learnt it in three short paragraphs. But the fun comes from the combo effects that you can create with the cards. And as you can mix up the eight different groups of cards however you like, the combo opportunities are very high. Find the perfect sets to smash up is a large part of the fun. Of course, mixing with other cards from other Smash Up games increase this even further.

If you don’t own any other version of this game yet, this version is a fine way to start if you like the Marvel universe. If you have another copy already and like Marvel characters then I would encourage you to add this into your collection. Seeing your favourite super-heroes battle alongside and against your existing cats and cowboys will be a lot of fun!

But perhaps check out the other versions that are out there too. See which group of characters interests you the most. If you like Vikings, Cowboys, Egyptians and Samurai? Try Smash Up: Oops I did it again. Maybe you’re more into Dragons, Mythical Greeks, Superheroes and Sharks? In which case try Smash Up: It's your fault. Or perhaps Princesses or Kitty cats are more your thing? Try Smash Up: Pretty Pretty! There really is a Smash Up for everyone!

Each group of characters in Smash Up: Marvel feels very different. Lets tale a look at the eight on this box.

The Avengers have fewer characters, preferring to fight in a small but powerful team. But their ability to get cards back and move through their deck is strong. Captain America inspires all his fellow Avengers by adding plus one power to each other character, whereas Thor uses his mighty powers to bring back Mjolnir if he has already used it. His mighty War Hammer can return to him bringing plus two power to his efforts.

When playing with S.H.I.E.L.D.’ you need to focus on their ability to call in reinforcements. Playing their cards in the right order will cause some powerful cascading effects. Working together can increase each character’s power by plus one, and Nick Fury can bring extra characters into play to assist their battles.

The Kree can take extra actions, bringing more power to their characters and draw extra cards. Using their advance technology, the Kree can create some mighty combos! Playing your Supreme Intelligence will add five power to the location and also plus one power for all other characters until the end of the turn. Being nine away from breakpoint could make your opponents feel comfortable about one particular location, but if you have four other characters there already, and you add this card, the win could be yours in a flash! Although not actually the Flash. He is D.C.!

The Sinister Six have many ways to reduce base locations breakpoint. As such, when the Sinister Six are in play, all players need to be careful to always have the most power at locations as things could change quickly.  They like to incite panic, ambush other players and the evil Doctor Octopus can even reduce the breakpoint by four just on his own!

The Masters of Evil can get points from destroying their own characters, so can sneak up on you points-wise, very quickly. The more points they have, the stronger they become, so you need to watch their growth carefully. Destroying their own characters to get points is one thing but they keep coming back for more. Baron Zemo gains victory points when a base scores, irrelevant of his team’s success thee. And then goes back to the player's deck rather than the discard, ready to do this all over again!

When Spidey and friends coming swinging into the game, they bring with them the ability to move from one location to the next with ease. Their main strength comes when they come together to fight in numbers. Spiderman will strengthen all other players; Miles Morales will reduce the opposing player's strength and Ghost-Spider can add extra cards into your hand when deployed. They are a great team to fight with and together.

The Ultimate’s like to move, and when they do, they grow in strength. They are team players so work well together, especially when their Leader Captain Marvel comes into town! She increases each other characters power by plus one which works well with Spectrum who has a power of four herself but can move to other bases at any point.

The Hydra characters have an interesting ability to destroy characters for their own benefit. Their leaders have an extra ability to draw extra cards when they order the destruction of their own troops! Madame Hydra seems to particularly enjoy doing this, adding plus two power to your location strength if you destroy one of your own characters. A decoy character in another area could bring you victory with this kamikaze move.

Smash Up: Marvel is a great fun game. It has a lot of replayability from the variety not just here, but with the ‘smash up’ effect with the other games. This box is a great place to start for fans of the Marvel universe. It's a great addition for players looking for some extra ‘Smash up’ fun!

It is best in a three I would say. Four can be a little longer and in a two the end can be a little frustrating. For example, if a player is 2-3 points away from victory and has a character in each location, then other players will trigger the end game and their own demise if they break a location due to the player in second or third place always scoring at locations as well as the lead player. It is a strange little nuisance that comes up in most two-player games I have experienced that is a little disappointing for the losing player.

This game has a lot of take-that. You can regularly destroy other players plans, characters, and attempts at victory. This game will not suit people who do not enjoy this sort of interplay. But this game is not to be taken too seriously. It is quick fun ‘arcade-style' fun. I really enjoy playing and find it to be a nice filler to play with my family.