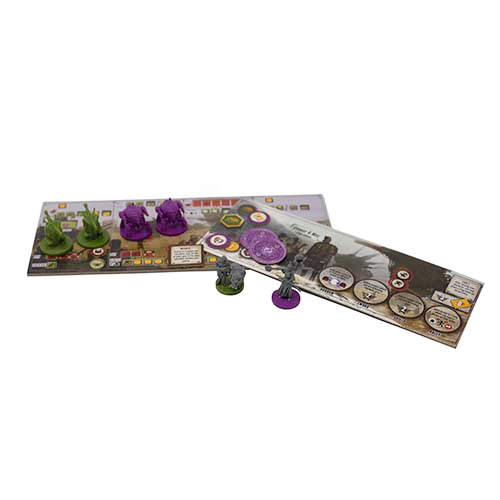 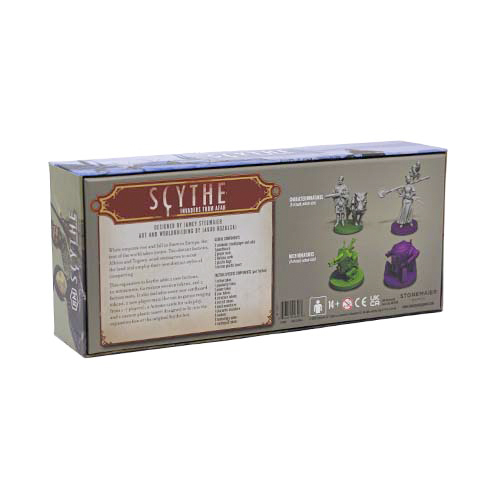 The first expansion for the original game, Scythe: Invaders from Afar is a great way to expand the player count and bring the total number of factions from five to seven for a truly epic gaming experience. Both the Albion and Togawa have arrived from distant lands to join the fight for the lands of Eastern Europa. The factions contain custom miniatures in new designs that further ex…
Read More
Category Board Games Tags Best Sellers, Scythe, Stonemaier Games, Zatu Gold Award SKU ZBG-STM615 Availability 3+ in stock
Share
Share this
86%

The first expansion for the original game, Scythe: Invaders from Afar is a great way to expand the player count and bring the total number of factions from five to seven for a truly epic gaming experience. Both the Albion and Togawa have arrived from distant lands to join the fight for the lands of Eastern Europa. The factions contain custom miniatures in new designs that further expand the lore and world of Scythe. These come with specific special rules and faction play mats. You may have noticed on the main board of the original game that there are already two starting home spaces ready for this expansion! The factions in Scythe: Invaders from Afar can be swapped out with any of the existing ones. In the case of playing with six or seven players there are also alternative abilities for the original factions to make sure everything balances correctly. The Scythe: Invaders from Afar expansion includes more custom wooden tokens for each player, more coins for the bank as well as six Automa cards for the solo-player. The plastic insert inside the expansion box is also designed to fit into the Scythe main box. Please not that the two factions do not come with new power dials for combat; you continue to use the ones present in the original game. A copy of Scythe is required to play. Player Count: 1-7 Time: 90-140 Minutes Age: 14+

It is common in the board gaming hobby for popular games to receive an expansion. This is done in an attempt to increase replay-ability, add variety, add to the player count and in rare cases balance an unbalanced game. As mentioned in my review of Scythe, the game has become quite popular within the hobby, meaning it comes as no surprise to fans of the game that an expansion was coming.

This expansion, which is also designed by Jamey Stegmaier, increases the player count of the game from a maximum of five players to a maximum of seven, which I've personally never played but would be extremely intrigued to have a go at!

Scythe: Invaders From Afar is the first of a few planned expansions for the Stonemaier Games franchise. This is a small box expansion that adds a few little things that can be integrated with ease into the base game.

The Scythe: Invaders From Afar expansion sees the addition of two new factions; the GREEN faction and PURPLE faction. Both of these have a unique feel to them and differ tremendously from the original five factions from the base game, with both adding a new minor mechanic to how they work.

The Albion (green) faction's main difference is the placement of territory flags. These flags can be placed at the end of a player's movement and act as an additional territory for end game scoring. This means some territories can be worth double points.

The Togawa (purple) faction has the ability to lay traps in hexes. Like the other faction, a player may lay a trap at the end of a movement action. Their choice of trap is their own and the remaining armed traps score a territory in the Togawa player's favour. Should another decide to enter a territory with an armed trap, they will need to suffer the penalty attached. This includes:

The traps are inconvenient, but not game destroying.

Both of the new factions have completely different mech abilities, which sees them not having the 'Riverwalk' and 'Speed' abilities which were interestingly shared by all factions in the base game. The replacement abilities for the Riverwalk ability also aid the player in movement around the board. On the other hand, the alternative ability for the 'Speed' ability feels a lot more limiting.

As is expected in games published by Stonemaier Games, the production value on the expansion is just as fantastic as that of the base game. With two new moulds for the plastic mechs in both factions, as well as individual designs for their wooden meeples.

New faction and player boards are produced exactly the same as the base game. Meaning choosing a faction randomly at the start of the game is still a possibility as there is no way of differentiating between these boards and those in the base game. Great to see that this is the case!

Firstly, I'd like to state that more variety and more choices in set-up is a great flavour in an expansion. The game does not need this expansion, however if you're a big fan of Scythe and would love more variety, along with an opportunity to tackle different strategies, then this is a must-have expansion.

That being said, I personally prefer to play as the factions from the base game. The new mechanics are lovely and add an element of intimidation to the board outside of mechs and workers. But for me they can be a little fiddly and at times I was forgetting about them! Forgetting to use a faction ability is my own fault I know, although the amount you need to juggle in Scythe throughout the game can cause someone to easily forget a mechanic.

Don't get me wrong, they are extremely fun to play! I will play as these if I fancy a challenge, and will certainly play as one of these if I'm playing with new players to create a bit of a handicap.

Additionally, the new player boards are an excellent addition to add to the variety of combinations between top row and bottom row actions. These will always be mixed in during random setups, including when showing new players.

All-in-all this is a great expansion and if you're a big fan of Scythe you've stopped reading this and already got your hands on it. If you haven't... Then what are you waiting for?

This blog was originally published on Oct 27th, 2017. Updated on May 18th, 2022 to improve the information available.