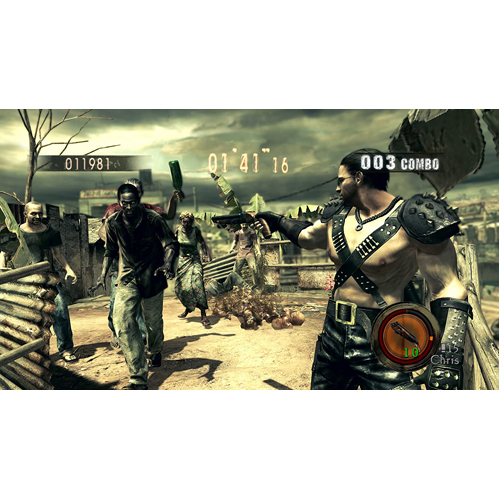 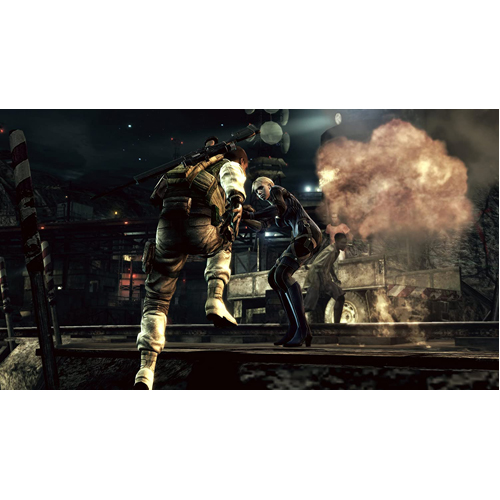 Pay in 3 interest-free payments on eligible purchases. Learn more
Success! We will let you know when this product is available again.
Your email address has been unsubscribed!
Your email address has been unsubscribed!
Notify me when this product is available to purchase!
This email address is already subscribed to this product!
From the ashes of old conflicts, a new terror arises. The Umbrella Corporation and its crop of lethal viruses have been destroyed and contained. But a new, more dangerous threat has emerged. Years after surviving the events in Raccoon City, Chris Redfield has been fighting the scourge of bio-organic weapons all over the world. Now a member of the Bio-terrorism Security Assessment Al…
Read More
Category Video Games Tags Capcom, Resident Evil Video Games, Software, Third Person Shooter Video Games, Xbox One, Zatu Silver Award SKU VCS-M1REHRCAP96613 Availability Out of stock
Share
Share this
77%

From the ashes of old conflicts, a new terror arises. The Umbrella Corporation and its crop of lethal viruses have been destroyed and contained. But a new, more dangerous threat has emerged. Years after surviving the events in Raccoon City, Chris Redfield has been fighting the scourge of bio-organic weapons all over the world. Now a member of the Bio-terrorism Security Assessment Alliance (BSAA), Chris is sent to Africa to investigate a biological agent that is transforming the populace into aggressive and disturbing creatures. Joined by another local BSAA agent, Sheva Alomar, the two must work together to solve the truth behind the disturbing turn of events. Introducing a revolutionary new co-op mode of gameplay to the series, Resident Evil 5 lets players experience fear together as terror moves out of the shadows and into the light of day.

Building on the Past

In 1996 Capcom changed the gaming landscape with the release of Resident Evil. With it, they defined the "survival horror" genre and brought it to the mainstream's attention. Resident Evil 2 and Resident Evil Nemesis built on this legacy, raising the standard set by the first title. But in 2005 Capcom released Resident Evil 4, a huge departure from its predecessors with more focus on gunplay and action. Resident Evil 5 continues in this vein, bringing even more focus to action rather than horror. Not only that, it also introduces a cooperative gameplay element to the mix.

Ten years after the destruction of Raccoon City, former S.T.A.R.S. Alpha team member Chris Redfield is now an agent of the less memorably named BSAA. The BSAA is an organisation that seeks out Umbrella's creations around the world and destroys them. We join Redfield as he lands in the African nation of Kijuju after receiving a tip that a huge bio-weapon deal is going to take place. During the adventure, he'll also learn what he can about a mysterious project known as Uroboros. Local BSAA agent Sheva joins Chris to battle through infected villagers, mutated abominations, and a returning enemy from Chris' past.

Aim for the Head

Combat hasn't changed from RE4. It feels a little more responsive but that's mainly down to being on a newer console. Annoyingly, you still have to stay still while aiming your weapon. This slows down combat somewhat and allows enemies to gain ground. Luckily, most enemies move slower than the zombies from previous titles. It takes some getting used to, but you get plenty of time to line up the perfect shot.

In keeping with the more action-focused gameplay, they've reworked the inventory system. You can now assign items to shortcuts on the D-Pad for quick weapon changes or healing. Going into your inventory no longer pauses combat and your bloodthirsty opponents will knock you out of it. Sadly, in co-op, you can't trade weapons. You'll need to communicate before picking them up in the field. You can exchange ammunition and healing items though.

Fun With a Friend

The introduction of a second character is what makes RE5 shine. You'll need teamwork and coordination to bring down bosses and minibosses. Sheva is a competent AI companion. She isn't great at headshots, so giving her an automatic weapon early on makes your journey easier. Alternatively, you can play the entire campaign cooperatively with a friend - which is obviously much more fun and greatly enhances the overall experience.

Co-op isn't drop-in drop-out. If someone joins a game they must wait for the host to either hit the next checkpoint or reload the last, which is a little annoying.

A Change of Pace

Resident Evil 5 is certainly a shift away from the survival horror elements of its predecessors but brings with it a new type of tension. Rather than looking out for zombies around every corner, you find yourself in more open spaces. But they're typically filled with enemies. So the tension comes from keeping your head on a swivel, calling out to your partner, and making sure you've got enough ammunition to push forward.

For an older title, RE5 looks great. Chris and Sheva are well animated and cut-scenes, although comical at times, bring everything to life. The soundtrack helps build tension nicely throughout and helps get the blood pumping during boss battles.

Resident Evil 5 lasts about 12 hours if you take your time, which is considerably shorter than RE4. You can find hidden BSAA badges throughout most levels. Time and score attack modes are available in each chapter. You unlock a fourth difficulty once you finish the campaign once. For completionists, points earned in-game can unlock character models. Costumes, filters and infinite-ammo versions of weapons are also available for purchase. Mercenaries mode also makes a welcome return and includes support for two-player co-op.

Resident Evil 5 builds on the foundation of its predecessor while taking it in an action-orientated direction. Having a partner introduces new degrees of depth and makes the game much more exciting to play. Co-op through is great but does take away what little scares the game has. Although there is an overall slowness to proceedings, the large-scale battles still keep the adventure exciting.