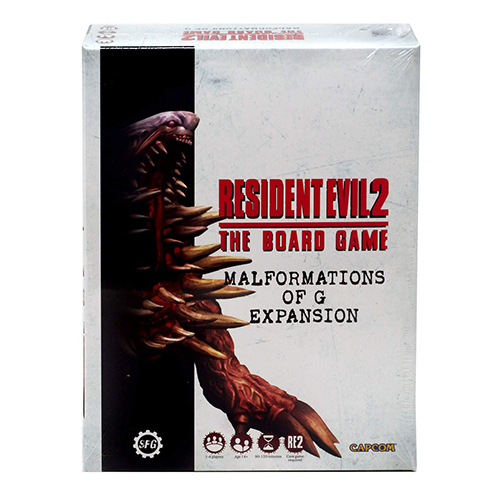 Add to Wishlist
The Malformations of G expansion contains four highly detailed models for the extra mutations of Dr William Birkin, along with rules and behavior cards for each of these boss models. Also included are updated scenarios and tiles for the core game and The B-Files expansion, allowing players to encounter these deadly enemies as part of their games—plus a brand-new scenario for the f…
Read More
Category Miniatures Tags Gold, Resident Evil, Resident Evil 2, Steamforged Games SKU ZBG-SFRE2004 Availability Out of stock
Share this
85%

The Malformations of G expansion contains four highly detailed models for the extra mutations of Dr William Birkin, along with rules and behavior cards for each of these boss models. Also included are updated scenarios and tiles for the core game and The B-Files expansion, allowing players to encounter these deadly enemies as part of their gamesplus a brand-new scenario for the final showdown with the massive Birkin Stage 5 mutation!

Once again, you'll need to get ready to hide behind the joysticks as you're thrown back to those horrific memories of pixel filled mutations and questionable noises. The Malformations of G Expansion for Steamforged Games's Resident Evil 2: The Board Game throws you straight back into the deep end by adding two more bosses from the A side story; the creature of nightmares's second and fourth mutations.

You'll take on William Birkin when he's full to the brim with the G-Virus in his second and fourth forms. As you continue to progress through your story, you'll watch as his being becomes more twisted and his mind less conscious of his own actions until he has the mentality of nothing more than another of the blood thirsty beasts. This expansion not only adds the lore elements from the original, it also helps create that progression of story all Resident Evil games; things are happening outside of your control and yet you still suffer the consequences.

There is no easy way to say it, but the extra challenge may ruin any chance you have of a perfect run campaign. The bosses are added as extras to existing scenarios, meaning those setups you knew get a whole lot trickier. On top of that, they match their mutation stage in terms of difficulty. Stage Two is considerably easier than Three, and Stage Four is a whole new level of gameplay. But don't go underestimating G Stage Two, that wild swing behaviour card will knock your head clean off if you're too close!

Should you have the mettle to add these abominations into your collection, you'll be given behaviour cards for them, the magnificently disgusting models for Stages Two and Four, and three item cards for your troubles. It's no lie that any boss will add an extra element of danger into the mix, but these guys mean business. G Stage Two will pursue, swipe at, and maim your characters relentlessly in a game of cat and mouse around the tiny play area.

Luckily, true to the original, enough damage will weaken it and reduce the evasion roll needed by one. But the G-Virus won't let this beast die so easily, as it returns in a later scenario as the G Stage Three from the core box. And when G Stage Four turns up unexpectedly (and believe me, it's unexpected) it'll tirelessly throw its humongous mass around the area in an attempt to crush you into a fine paste

There is no denying the challenge these guys add to the campaign; the difficulty itself is undeniable, but that sense of victory when you put them down is oh so much more! After a long and arduous battle, we put Stage Two down with a knife, and that felt good! (We also had no choice, we used all the ammo we had getting him to 1HP!)

The Malformations of G Expansion will definitely require the same standard of player interaction and engagement as the core game, and will demonstrate how unforgiving the game is should you waver.

Luckily! The boss battles are the only situations where death is acceptable, having a player die against a boss doesn't end the game like normal. Though don't go risking your way through each encounter with anything bigger than your average Licker, working together should still be top priority!

Steamforged Games don't skimp on the details for any miniatures, and these two look as gruesome as you'd want them to. You can see the coils of stretched flesh along the chest of Stage Two, and the refined mutated hide of Stage Four. It's clear that neither of these would win a beauty contest, but that's the point! Their hideous visuals are half the fear, with the other half being entirely centred around what they will do with those massive, blood stained talons.

Combine that with the fantastically illustrated behaviour cards and you've got a true horror show going on! On the less aesthetic side, the cards are of similar quality to that of the core game and the models are sturdy and robust, any eager painter could easily make these beasties look a much more frightening to get that true immersion.

Because the expansion is purely for the addition of two bosses, the rule book isn't overly robust. However it is very clear in how to incorporate the bosses into their specific scenarios and what these will new additions will entail.

Final Thoughts on the Malformations of G Expansion

Whether you're looking for your a way to make the main A campaign that more challenging after Hard Mode, or you just crave the nostalgia of keeping the game as true to the original as possible, this is the expansion you need. Malformations of G adds smaller elements to the game but also makes some of the shorter, less complicated scenarios have that extra bite, often literally!