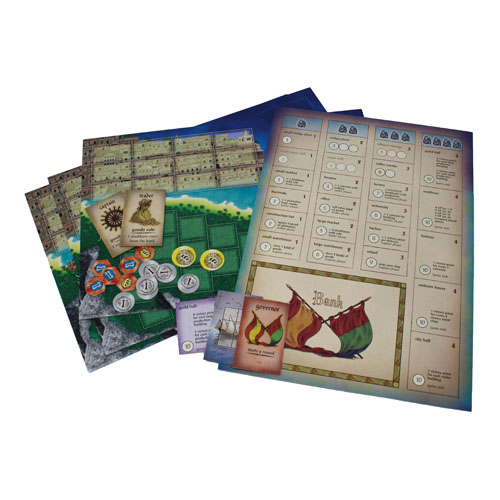 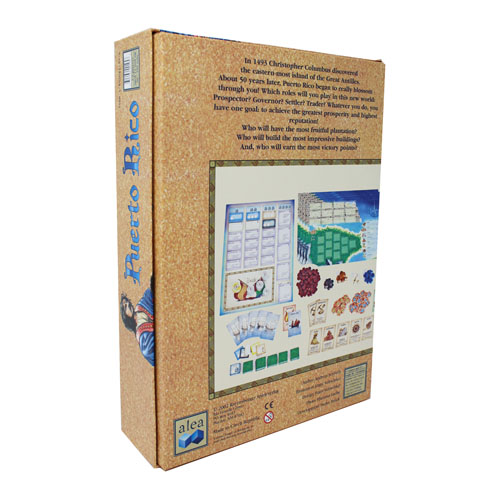 Pay in 3 interest-free payments on eligible purchases. Learn more
Success! We will let you know when this product is available again.
Your email address has been unsubscribed!
Your email address has been unsubscribed!
Notify me when this product is available to purchase!
This email address is already subscribed to this product!
In Puerto Rico players assume the roles of colonial governors on the island of Puerto Rico. The aim of the game is to amass victory points by shipping goods to Europe or by constructing buildings.Players earn victory points for owning buildings, for shipping goods, and for manned “large buildings.” Each player’s accumulated shipping chips are kept face down and com…
Read More
Category Board Games Tags Andreas Seyfarth, Rio Grande Games SKU ZBG-RGG195 Availability Out of stock
Share
Share this
85%

In Puerto Rico players assume the roles of colonial governors on the island of Puerto Rico. The aim of the game is to amass victory points by shipping goods to Europe or by constructing buildings.Players earn victory points for owning buildings, for shipping goods, and for manned "large buildings." Each player's accumulated shipping chips are kept face down and come in denominations of one or five. This prevents other players from being able to determine the exact score of another player. Goods and doubloons are placed in clear view of other players and the totals of each can always be requested by a player. As the game enters its later stages, the unknown quantity of shipping tokens and its denominations require players to consider their options before choosing a role that can end the game.

It's not really possible to say anything new about Puerto Rico, the game has been around for years, and for many it will be part of their early introduction into Euro games. It followed Settlers of Catan and maybe El Grande as a gateway into board gaming. Of note is that Puerto Rico has stood the test of time, has remained highly ranked and rated, as other games have perhaps dropped aside.

Each player takes on the role of a plantation owner on the island of Puerto Rico and will be attempting to expand their own plantation and wealth.  Puerto Rico is a role selection game where each player in turn selects a role and uses it to develop an economy.  The ultimate aim of the economy is the generation of victory points, but in order to get there it is going to be necessary to generate population, income, goods and production facilities.  The precise route to victory can vary, there are many strategies to develop the economy and ultimately those victory points.

Puerto Rico is all about the role selection.  These roles are:

Then the next player picks from the remaining roles and the process repeats. This continues until all players have taken a role and actioned it. Then a one Doubloon coin is placed on the roles not selected (an incentive) and the Governor moves on to the next player who will become the starting player for the next round.

Normally a game will take between 90 and 120 minutes depending on the number of players so it falls into the sweet spot of 20 to 30 minutes per player.  The game ends when one of the below conditions has been met.

The winner is the player with the most victory points.  Doubloons and goods are the tie breaker.

Puerto Rico is more complex than Settlers of Catan but not difficult to learn. The rules are well written, well illustrated and easy to understand. The components are good quality and thematic, it certainly does feel like trying to manage a plantation in days gone by.

Puerto Rico deserves the accolades and ratings because game play is challenging and highly interactive, thematic, and there are a wide variety of possible strategies to employ to gain those victory points.

This blog was originally published on April 27th, 2017. Updated on May 4th, 2022 to improve the information available.