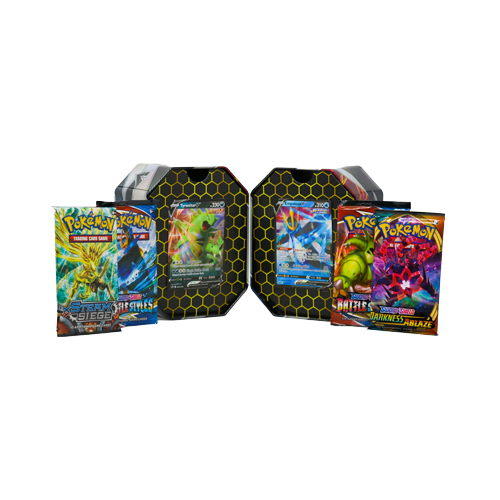 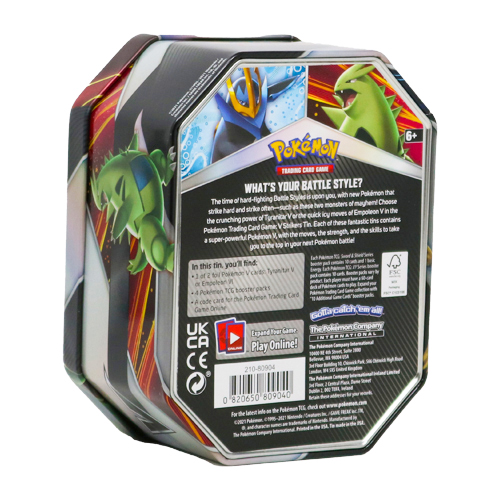 you could earn 4399 victory points

you could earn 4399 victory points

Battle Styles brings two new archetypes to the series: Hard-hitting Single Strike and fast-flowing Rapid Strike cards appear! These pokemon are focused on either huge damage or speedy tricks, respectively. Pokemon like Mawile, Houndoom, Primape and Stonjourner make up the Single Strike group, based heavily in the Dark and Fighting types. The main card, Single Strike Urshifu, is also a Fighting type.

Rapid Strike, however, is made up primarily of Lightning, Water and Fighting. Octillery, Mienshao, Luxray and Falinks are some of the cards you can find in Battle Styles! Much like Single Strike, the Rapid Strike Urshifu V and VMAX cards are fighting type.

These tins contain two powerhouses of Single Strike and Rapid Strike! The terrifying Tyranitar V and the imperial Empoleon V! These cards fit perfectly into any deck involving the archetypes, and feature all new promotional cart art!

They also contain 4 special booster packs! These are:

Battle Styles - The most important pack here! Start your Rapid Strike and Single Strike collection!
Darkness Ablaze - Hunt for cards like Charizard VMAX and Eternatus! These powerful pokemon will work great in a Rapid/Single Strike deck!
Steam Siege - Take a trip to the past! Steam Siege is set in a fantasy realm where an evil Mega Gardevoir has taken over! Can you stop them before it’s too late?

Battle Styles came roaring onto the scene of modern Pokemon in March, and brought with it two powerful new archetypes! Rapid Strike and Single Strike are two new powers a Pokemon Card can have, and along with Urshifu, each got a powerful pokemon! Single Strike Tyranitar and Rapid Strike Empoleon are both great deckbuilding tools. They also got their own V-Striker Tins soon after the release of Battle Styles itself!

These tins contain a Tyranitar or Empoleon V card with brand new artwork from Studio PLANETA, as well as 4 packs! 2 Battle Styles, 1 Darkness Ablaze and 1 XY Steam Siege packs are included. Obviously, due to the age of Steam Siege, this pack will not give you any standard legal cards unlike the Battle Styles and the Darkness Ablaze packs.

Empoleon V, is a hyper-controlling card that can completely stop your opponents in their tracks! Its ability, Emperor's Eyes, stop all non-rule box Basic Pokemon from having an ability when they are in play. This stops a lot of common engines from being able to function! Swirling Slice deals 130 damage for 1 Water and 2 Colourless, and has you move an energy off Empoleon onto another Pokemon. Use cards like Bronzong to control this and use it in your favour!

Strong As The Mountain

Tyranitar, on the other hand, is heavily based on both mill and self-mill. Its first ability, Cragalanche, discards the top two cards of your opponent's deck for 1 Darkness and 2 Colourless. It only deals 60 damage, however, so you might want the tradeoff. Single Strike Crush deals a "crushing" 240 damage for 2 Darkness and 2 Colourless, but forces you to discard the top 4 cards of your deck. With both Chilling Reign and Evolving Skies bringing cards that care about the Discard Pile, this may turn out to be a huge boon! Combine it with more cards, like Giovanni's Exile or Durant, to take it even farther!

The packs themselves are also quite nice. With my Empoleon box, I wasn't incredibly lucky. I got some good reverse holos for Single Strike and Rapid Strike decks in Mawile and Scroll of Swirls. I also got some more fun cards like Durant to play in the Tyranitar deck. The Tyranitar tin, on the other hand, was fantastic! I got a Single-Strike Urshifu V from the first Battle Styles pack, and the Steam Siege pack not only gave me a reverse holographic rare in Nidoking, but also a full art Ultra-Rare Mega Gardevoir EX!

All in all, these tins are great. Playable promo cards, great packs and a visually pleasing tin design to top it all off. Steam Siege is hard to find now, and the Mega Gardevoir EX is enough of a reason to try and pull them! The tins won't go amiss for anyone, I'm sure.