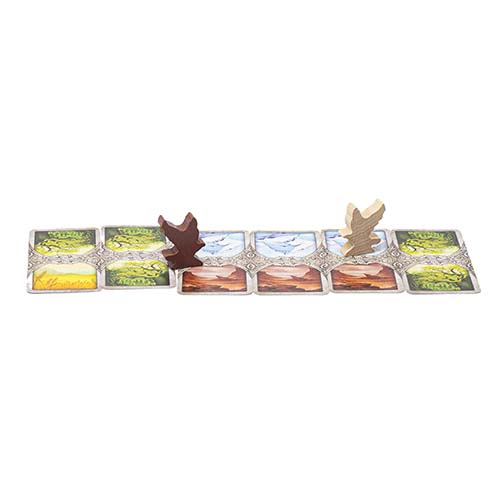 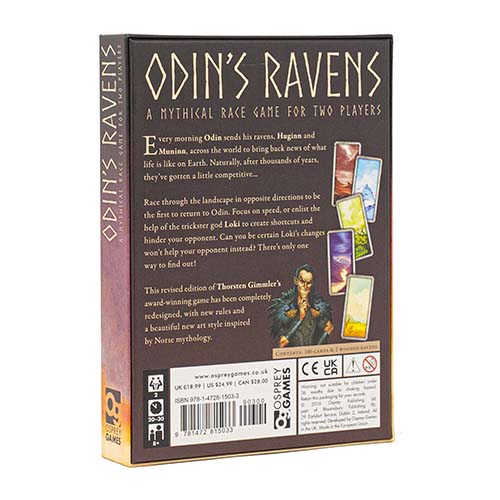 you could earn 1216 victory points

you could earn 1216 victory points

Odin’s Ravens is a two-player homage to norse mythology, with both players taking on the role of one of Odin’s infamous ravens. You will race against each other, along seperate tracks in a bid to reach the end of the world first.The track is made up of domino-style cards, each side depicting a landscape that matches with cards in a players deck. The players must play cards from …
Read More
Category Board Games Tag Osprey Games SKU ZBG-OSP5033 Availability 3+ in stock
Share
Share this
80%

Odin’s Ravens is a two-player homage to norse mythology, with both players taking on the role of one of Odin’s infamous ravens. You will race against each other, along seperate tracks in a bid to reach the end of the world first.

The track is made up of domino-style cards, each side depicting a landscape that matches with cards in a players deck. The players must play cards from their hand, matching the landscapes in front of them to progress.

Of course, you’re not alone in your adventures, and the mischievous Loki is on hand to provide you with a little boost, while hindering the other players' progress as well!

Race to the end to win Odin’s favour and become his most favoured raven!

Arguably Thorsten Gimmler’s most well known game, ‘No Thanks!’ is one of my favourite filler games (a game that takes no more than 30 minutes), offering both simplicity, tactics, luck and risk all at an incredibly reasonable price and so my expectations were high when playing Odin’s Ravens for the first time.

Luckily, I was delighted to find that Odin’s Ravens is a wonderful game that goes against the trend of two-player games feeling reliant on confrontation, without losing the fun of player interaction.

Set-up for Odin's Ravens is rather simple:

The aim of the game is the move your raven into the final space on your opponent’s side; otherwise known as the end of the world! Gameplay in Odin’s Raven is very simple. On your turn, you can play flight cards and/or Loki cards. You can play as many cards as you would like and once cards have been played, they are placed in your discard pile.

Finally, you need to draw three cards to end your turn and, like at the start, these can be taken from either or both piles. If a player ends up with more than seven cards, cards are simply discarded onto your discard pile until you are left with seven. The real tactics come when deciding which card(s) to play;

Flight cards simply must match the land in front of you to move along and, to avoid ever having hands that do nothing, two of the same card can also help you move along to any new land. If there are two or more of the same land in a row, usually as a result of the Loki cards, you can use the matching flight card to move over all of these spaces.

Whilst just using flight cards would be fine, the real fun comes when using the Loki cards. Loki, being the God of mischief, is all about mixing the game up. His cards allow you to do a variety of actions such as rotating cards, removing cards, swapping cards and adding extra cards to your hand and it is these cards that can be used to make incredible comebacks and slow your opponent down!

Although this may sound like a very simple, uneventful game, that could not be further from the truth. Odin's Ravens is a brilliant two-player game with all the drama of a chariot race! Thorsten Gimmler has once again created a game that is incredibly simple to learn and yet has a good amount of strategy to keep it interesting.

The way that it is set-up means that games will always be slightly different and this means that the tactics that you used in the last game, may not work so well if you play a second time and I’m yet to play this and not want at least a second game!

I have never known a game with so many comebacks and nail biting finishes. You can be sat there looking at your hand thinking ‘I’ve won this!’ as your opponent plays a few cards and whizzes to the finish. Components are of good quality – the box, ravens and cards are all great and the price of the game is definitely a plus as it can usually be purchased for around £16.

My only minor criticism is that the theme is simply okay. There is nothing wrong with the theme, it is just that, despite the name, it does not feel like Norse mythology. Overall though, I would highly recommend anybody who enjoys two-player games to add this to their collection.

Odin’s Ravens is a racing game for two players. In the game each player takes on the role of one of Odin’s ravens. The ravens have made a race out of their daily patrol of the world. Each raven wants to be the first to fly once round the World and return to Odin. They can also call on Loki, the God of trickery, in order to try and hamper their opponent.

Read on below to find out how this race around the World works.

Shuffle the land cards and place 16 cards in a line between the players. There are two sides to each card and these will form the routes the ravens will fly before turning round at the top and returning on the other route.

When setting up the track, no two land types can be next to each other on a route. If this would happen, rotate the newest card by 180 degrees. If there would still be a match, discard the new card to the bottom of the deck and draw a replacement card.

On their turn players will play cards from their hand either to advance their raven (flight cards) or to influence the race (Loki cards). There is no limit to the number of cards which a player can play on their turn.

Round the World in 15 Minutes

In order to advance their raven, a player must play a land card matching the type of terrain on the next space. Players can play two cards of the same land type as a substitute for another card. A player may continue to play flight cards, advancing their raven, for as long as they have the correct cards in their hand. If several spaces of the same land type are next to each other, a player can use a flight card of the matching land type to move to the end of the row of spaces (i.e. a player could use one mountain card to move over several mountain spaces in a row, placing their raven on the last mountain space). Used flight cards go into the discard pile.

Loki cards influence the game by adding in different abilities. Players can, amongst other things, swap or rotate land cards or even add an extra land card to one of the flight paths using a Loki card.

There are four different types of Loki card, each with two effects on them. Each player starts the game with two Loki cards of each type. When playing a Loki card a player can only use one of the effects on the cards. The Loki card is discarded from the game once it has been used.

If a card is in a loop, or has been moved by the slide action it cannot be slid, swapped or removed but it can be rotated. Sometimes a card may be slid to overlap a card placed in a loop. The card which is being placed or moved will be the card on top and the land type on the bottom card is ignored. Any partially covered card cannot be moved by the actions of a Loki card.

A turn ends when a player has played all of the cards they wish to. They then draw three cards into their hand. These can be any combination of flight cards and Loki cards and players can look at each card they draw as they draw it. After drawing cards a player has more than seven cards in their hand, they must discard down to seven. When your draw pile is empty, shuffle your discard pile and place it as a new draw pile.

And the Winner is...

The winner of Odin’s Ravens is whoever manages to fly their raven to the end of the world and back first. If that player went first the other player can then take a turn to see if their raven can finish too. Then if both players finish on the same turn, the player who has more cards in their hand wins. If both players have the same number of cards left there is a tie and the ravens need to race again.